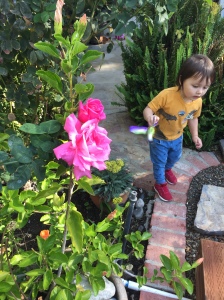 The idea of flying solo with a toddler + baby made me want to break out in hives, but we made it!

Strangely enough, the day before our departure Langdon woke up at 5am in the morning – which is pretty unusual for him.  Maybe subconsciously he was preparing for the trip, because the morning of departure he was ready to head out the door at an ungodly hour!  Luckily Jeff was able to take us to the airport, because a friend was able to cover him at work!  Oh thank god, because I did not want to have to wrangle all the bags + kids all alone!

Langdon saying goodbye to his precious father at the gate: 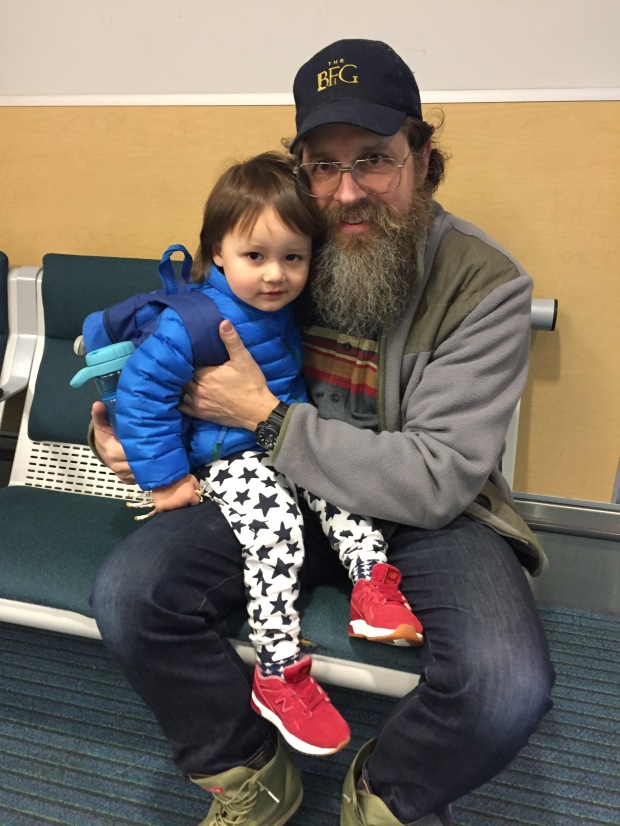 Jeff is literally Langdon’s favorite person in the entire world.  I caught them sharing a goodbye kiss. 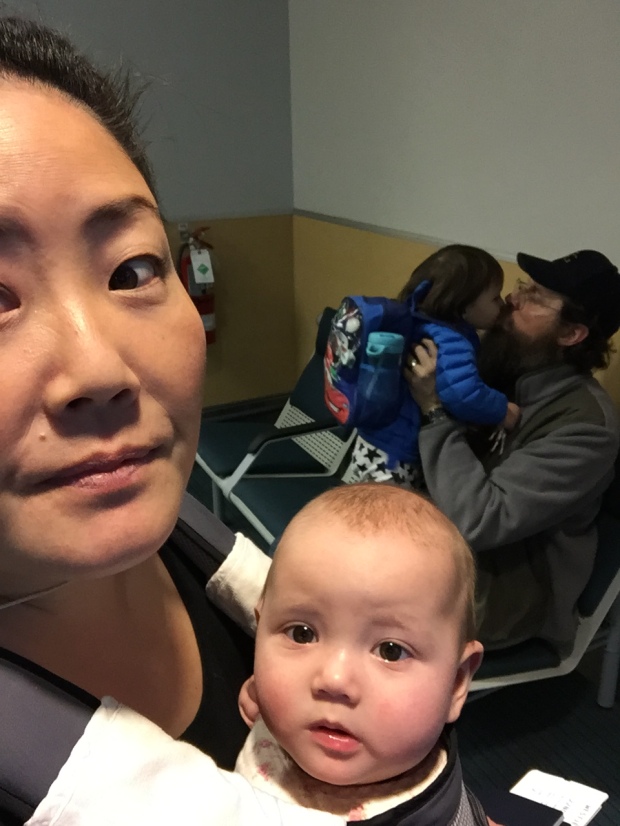 Bye daddy!  See you in Los Angeles in a couple weeks!  When I saw the line for security I was like OH HELL NO.  But Canadian actor Victor Garber was standing a few passengers behind me, so I thought it was a pretty appropriate send off. 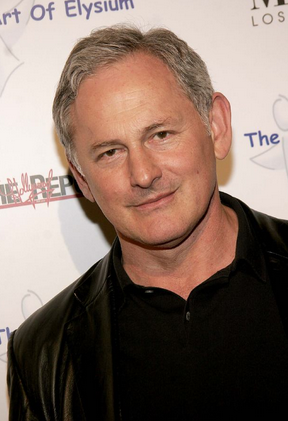 Thank god an airport employee saw us + whisked us away to the family line.  I didn’t know there was a family line.  It was awesome because there is no judgement in the family line.  Everyone is so sympathetic when one of our offspring screeched, cried, ran off or when we had to wrangle all our belongings + put them on the conveyor belt while keeping an eye on rascally children.

Langdon was such a good boy during security + customs.  I had an umbrella stroller, but only used it for schlepping all our crap.  Langdon’s never been a big fan of sitting in a stroller.  But he stayed close by + was very helpful to me + Clementine!  I could not have asked for an easier boarding!  I told him, “Say goodbye to rainy Vancouver!”. 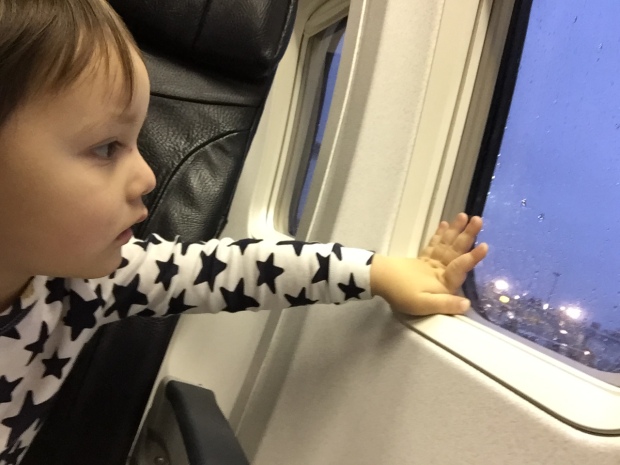 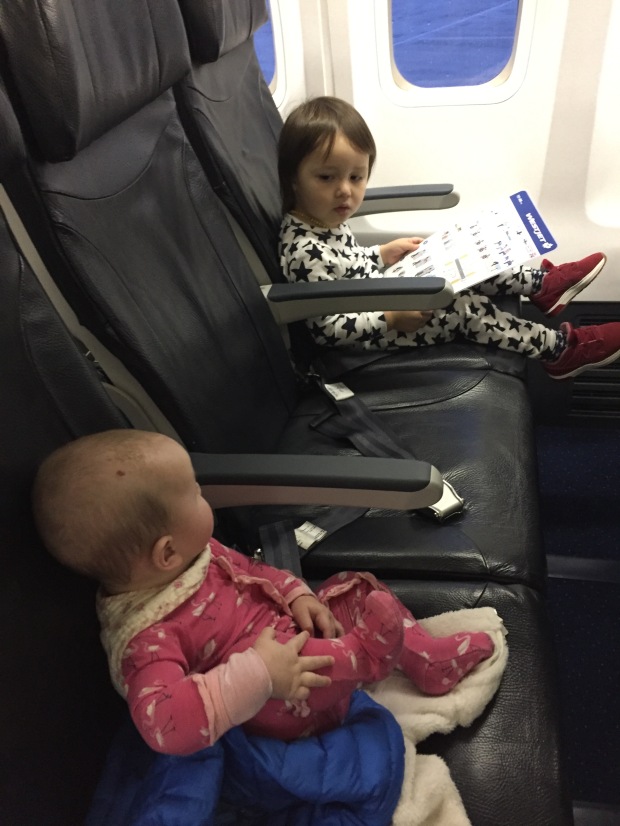 I wore Clementine during the majority of the flight + so she napped for an hour.  What a happy baby! 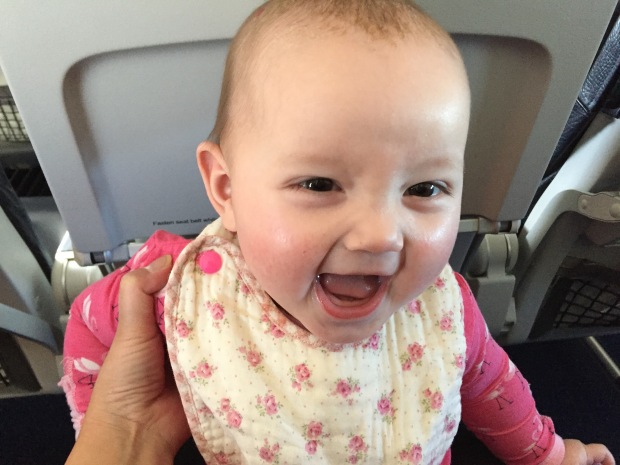 And thank you Apple, for inventing the iPad.  I bought Langdon headphones especially for the trip.  So he watched some shows + played with a couple apps.  In addition, I packed some typically off limit snacks + let him have at it.  I didn’t even have to go through my bag of tricks that I prepared of games, coloring, play dough + stickers!  Magic. 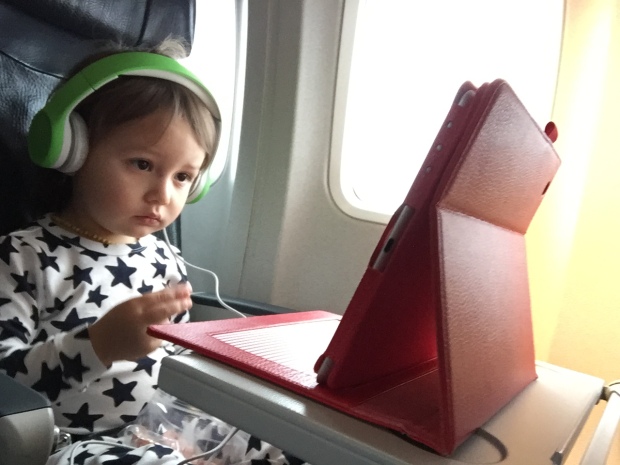 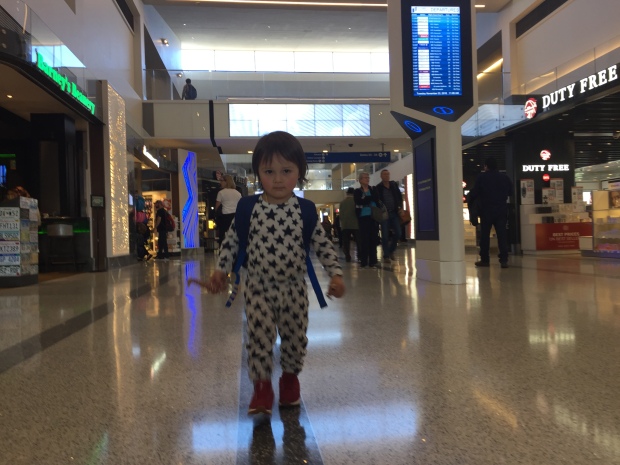 At baggage claim when he saw his Nana, he flew into her waiting arms! 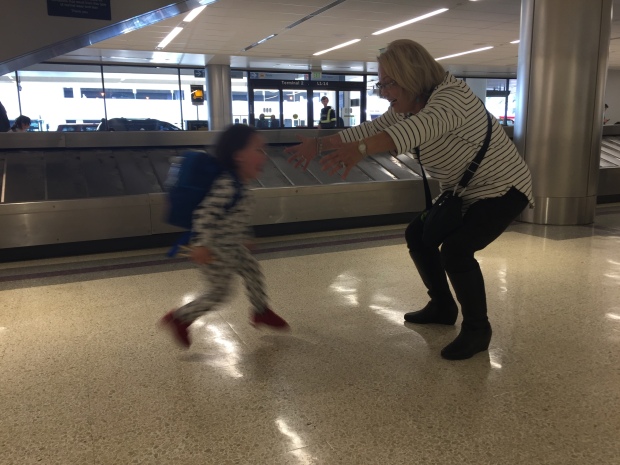 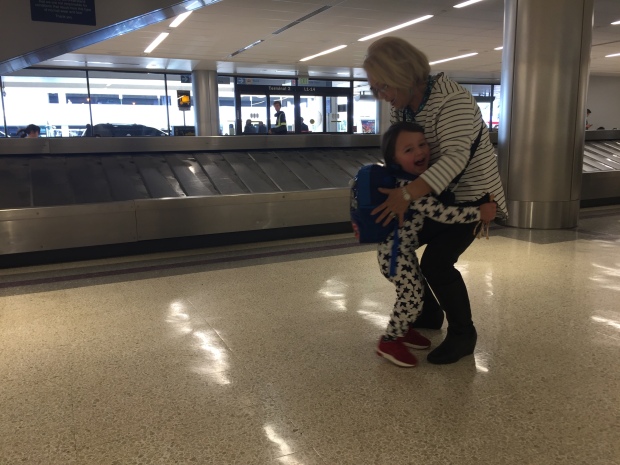 It was a hot day when we arrived in Los Angeles!  After we all loaded into the car, my sister turned on the AC + Langdon asked, “What’s that cold stuff coming out???”.  HAHAHAAA!!!!  In Vancouver we very rarely turn on the AC in our car!  And when we mentioned the sun + blue sky to him, he replied, “Yeah it’s not dark!”.  OMG this kid does not miss a thing.

When we reached my parent’s home, the first thing we did was to enjoy my mom’s enchanted garden. 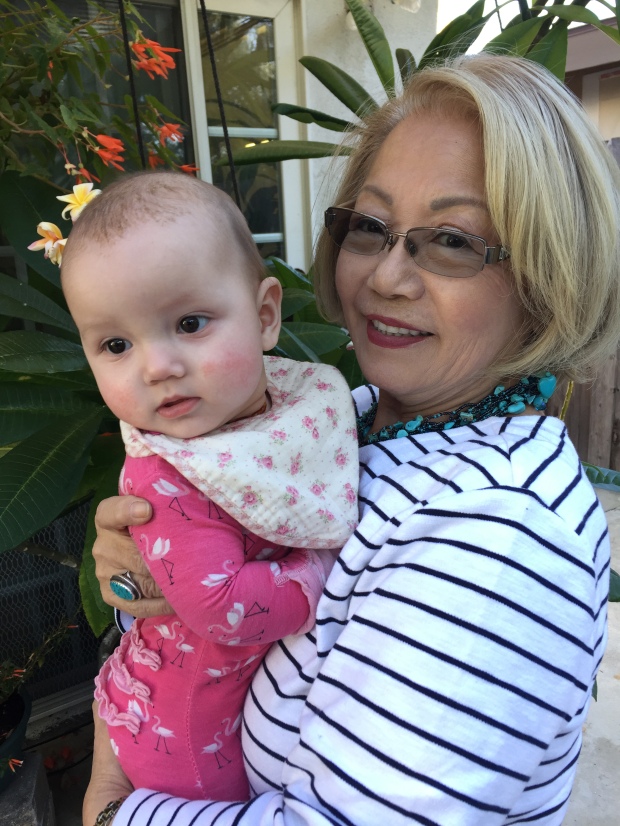 Smelling the scent of plumeria + roses in winter is so dreamy!!!

The next day, Langdon + I explored the garden. 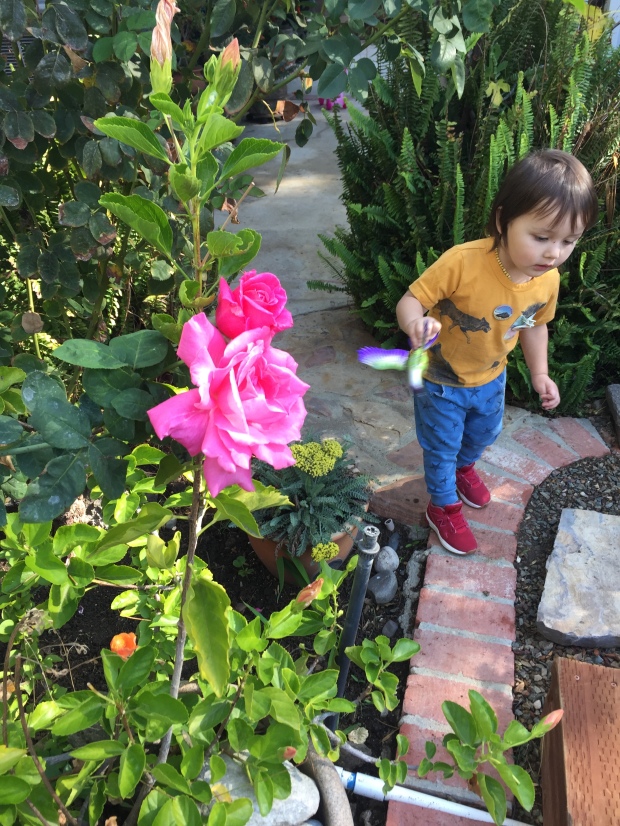 And took a walk to the park.  Langdon makes me laugh all the time!  He’s always been such a crack up with a huge personality! 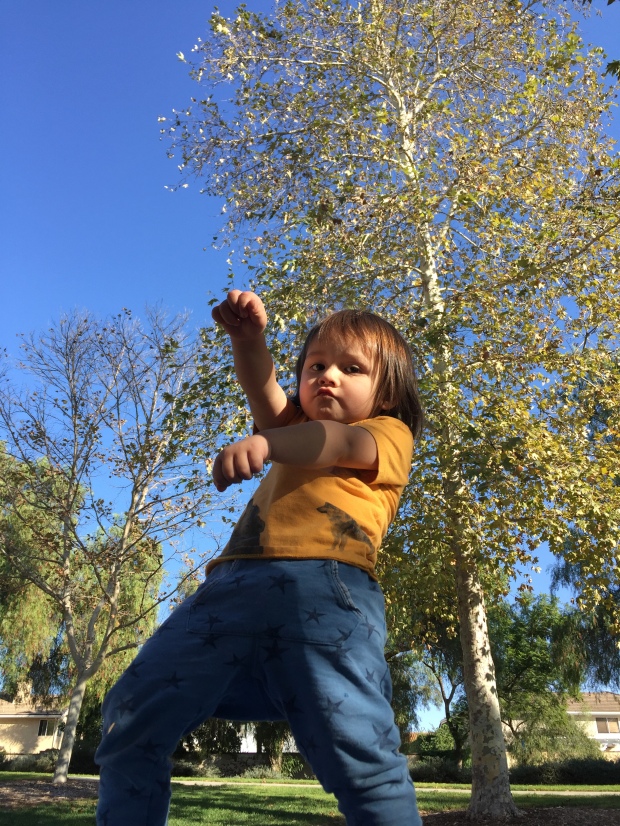 And Clementine has been THRIVING since being with my family.  In Vancouver so much of my attention is focused on running around after a very demanding toddler.  Poor Clementine usually sits in the corner of the couch like a little forgotten potato.  But here, she is so doted after, carried around + is constantly stimulated.  Clementine is delayed in some of her physical milestones (possibly some of it due to my neglect, I hate to admit).  My sister is a physical therapist + has been having all of us work with her.  How much little Clem has changed in over a week!!!!! 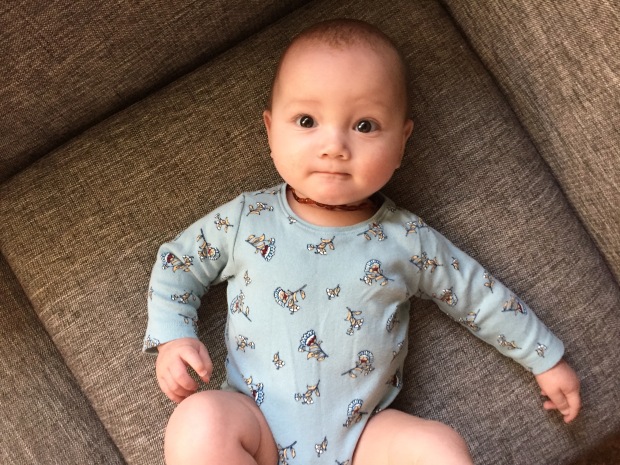 Since we have shown up in Southern California we are constantly outside + on the go.  We have been having such a blast in the short time we’ve been here!  On the next post, all the activities, adventure + good times!!!!  TOO MUCH FUN!!!!!