Take some meditation classes if you plan on driving in Vancouver, because you will literally go bonkers!!!

I’ve been meaning to write this post for a long time.  Vancouver driving is unlike ANY driving I’ve ever experienced in my entire life anywhere.  Hands down.  Just ask American expats + anyone who’s visited Vancouver.  They will all say that it’ll make you want to tear your hair out!!!  Even though Los Angeles is a big car city + infamous for it’s road rage – Vancouver has unleashed a beast in me that has never been seen before!!!!

I’m really into lists as you all know, so here is a list of reasons why driving in Vancouver bites.

In my opinion a large part of the vehicular craziness is due to the high population of people who are new to driving in Vancouver.  Like their first-time-behind-a-wheel-driver.  If you see a sticker on the back of a car with a “N” or an “L” – pass them, pass them, PASS THEM!!!!! 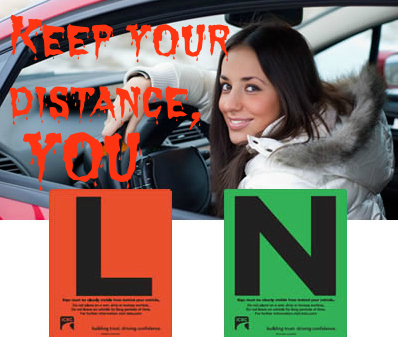 “L” means Learner’s License.  “N” means Novice License.  When I first moved to Vancouver I asked Jeff what the stickers meant because these stickers are on like, 70 PERCENT OF CARS IN VANCOUVER!!!!  I’m not even joking!!!  These drivers are so timid + hesitant – I find it to be just as dangerous as aggressive driving!  Beware of these new drivers!!!  I’m glad I grew up in Los Angeles where you learn to drive defensively, because you never know what these new drivers are going to pull!  Keep your eye on them!

Constantly getting stuck behind multiple big ass semis driving on the streets suck.  They’re gargantuan, they accelerate slow + they’re blowing out all their grody diesel fuel at you.

So you’re driving down the street.  People will turn on their left hand turn signal AT THE LAST MINUTE causing you to slam on your brakes + then get stuck behind that jerk.  Sometimes they won’t even put on their turn signal + just decide to stop.

And when they make a right hand turn, they make a REALLY WIDE + PAIIIIINFULLY SLOW turn, so you can’t even inch around them + have to wait while they try this really super difficult (sarcasm) maneuver rrrreeealllly sloooooowly.

Pedestrians jaywalk like it’s nobody’s business in Vancouver.  But they’re not even smart, fast jaywalkers like in New York.  It’s like they’ll wait for a car to get closer + THEN they’ll decide to pop out into traffic!  And then they won’t even run, or feign urgency.  They’ll walk real slow + real deliberate.  That’s when I give them the horn + make them dance!!!

So, Vancouverites don’t know how to drive?  Well, guess what happens when an approaching ambulance, or fire truck’s sirens + lights go off?  THAT’S RIGHT.  CHAOS.  People won’t pull off to the side like they’re supposed to.  Or if they’re in the middle of the intersection they won’t stop + stay where they are like they’re supposed to, they’ll proceed with their turn!  I need this following image on my steering wheel.

With rain comes limited visibility.  Pair that with horrible drivers?  FUGGEDABOUTIT.  Game over.  SAVE YOURSELF!!!!

Vancouver speed limits are badly in need of review.  I mean it’s like they’ve been keeping the same speed limits that they’ve had since 1947 or something.  Plus, no one seems to understand that slower vehicles stay to the right!!!!  For god’s sake!!!  Oh, and if you own a BMW, Mercedes, Audi or a Porsche in Vancouver that means you drive EXTRA slow.  Yeah, makes total sense.

Jack Nicholson is NOT AMUSED.

I honk at other drivers like I get paid per honk.  I wave + flap my arms about like a chicken with ADHD + shake my fist + scream, “CURSES!!!!!” every single time I step into my car in Vancouver.  And I come up with the most colorful expletives during my blind fits of rage, it’s like lucky charms turrets syndrome coming out of my mouth.  I actually surprise myself at the creative swear word combinations I come up with.  I’ll take a moment to pause during my fit + think proudly to myself, “Not bad!!!”.

Well, thanks for listening to my rants + raves.  I just had to get it off my chest.  When driving in Vancouver take lots of deep breaths + don’t bother to ask yourself in anguish, “WHHHYYYYYY???!!!!!”.  Because there’s no use.