Canmore is a town very close to our hearts that was also hit hard by the flooding.  But last weekend we returned to our beloved Canadian Rocky town! END_OF_DOCUMENT_TOKEN_TO_BE_REPLACED

The devastating + horrific floods have ripped apart the communities of Southern Alberta.  Jeff + I have been spared, as we live in a higher spot in our little town of Black Diamond.  I haven’t been able to post anything lately because our internet JUST turned back on after 6 days of being out of service.  Neighboring towns are completely destroyed + there is no public access into Canmore + Exshaw unless you have proof of residency.  I will write a proper post sometime next week – Jeff’s location on Hell on Wheels is flooded out, which started his hiatus early + we are leaving tomorrow morning for our camping trip.  My heart goes out to all the people who have lost their homes, businesses + livelihoods!!!

If you haven’t watched coverage of the flooding on the news, here’s a link to a video about High River, our neighboring town which was hit really really hard.  Take care everyone!  Stay strong Alberta, I love you!!!!

A Long Way to Go

Hey everyone!  Jeff + I still have a lot of sorting + organizing to do by the end of the month! END_OF_DOCUMENT_TOKEN_TO_BE_REPLACED

Weekend Paddle in the Rockies

Je m’excuse for not posting recently.  Pure negligence is the only excuse I can offer!  Or possibly it could be because I was seduced over the weekend by the Canadian Rockies!!!! END_OF_DOCUMENT_TOKEN_TO_BE_REPLACED

One Of Many Weekends To Come

Still in Chinatown, Calgary.  This past weekend was the first of many weekends that are to be bestowed upon me this spring/summer. END_OF_DOCUMENT_TOKEN_TO_BE_REPLACED

Hey!  I have to make this post super short.  We’re packing up the cabin + need to make it on the road to Vancouver today in the next couple hours!  Gear up for the next 10 hours of road!!!

Yesterday basically sucked a bunch of sour grapes.  I knew it was going to be a gnarly day.  I didn’t even put on my turquoise, y’all!!!!  Here’s the very full Budget van hauling ass to Exshaw.

If you cosmopolitan folk don’t know what a 40 ft storage container looks like, this is a big leviathan.  And this is what we filled yesterday.

Here’s me revealing the full van, biting my knuckles off.  Stop looking at my ankle socks!!!!  I had no choice!

Poor Jeff is so tired + is working so hardcore.  Here he is laid out on the liftgate after hitting his head.  Note to anyone making a big move, some words of wisdom – YOU MUST GET A TRUCK WITH A LIFTGATE.  I cannot stress that enough.

We drove back to Canmore for our second load + Jeff nearly burst a blood vessel because he realized we forgot the keys to the storage garage.  He had a solution.  This is how Canadians remove locks.  Take an ax to it, Canuck!!!!  Get ANGRY!!!!

All my costumer friends, I know it pains you to look at this next picture.  You’ll be even more sad for me when I tell you that during the ride, two of the racks fell over.  Jeff was raging because it knocked over his stupid Jesse James looking bike cruiser with the flames on it.  I was OVER IT!!!!  Go ride that ugly bike in Long Beach!!!! 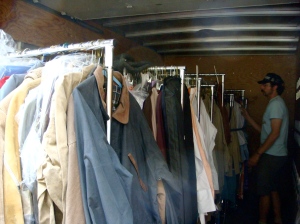 Anyways, these pictures do not convey the pain + torture + sweat that we endured.  We cleaned out: 1) the storage garage 2) the box storage 3) Peter + Dolly’s garage + 4) Roger’s garage.  Yeah, uh-huh.  That’s right.  4 locations. 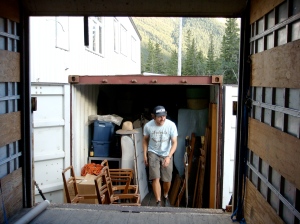 At least he can still smile!

As for me, notsomuch. 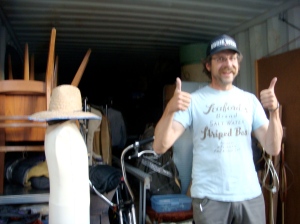 This picture is blurry because I couldn’t see straight anymore.

At 9:30 I pre-wrapped myself because I couldn’t take it anymore.  We were looking at things left behind in the storage garage in the pitch dark with one flashlight.  Jeff still had to pick up things from a coworker + drop things off at Peter + Dolly.  I was like, “Yo, I’m out.”.  But, we found this old picture of lanky young Jeff + I felt slightly better.  Juuuust slightly.  Pictures like this remind me of things that I love about Jeff.

Wish me luck today.  I will need it.

Tonight’s post may be short but full of pictures because I’m that exhausted.

Not half as exhausted as Jeff is I’m sure.  Tuesday morning Jeff came home from work at 5am.   I went to the gym, picked us up breakfast + he was up at 8:30am.  I really don’t know how he does it.  I consider myself a relatively hyper-active person, but he takes the cake.  He’s off his rocker.

First off, we were off to research our alternative storage options to consolidate all of Jeff’s stuff, (things, tchotchkes, memories, whathaveyou).  First, we checked out some transport trailers out in Exshaw which is 15 min from Canmore.  Keith owns an excavating yard + has a huge, sweet shop that he sometimes rents out to films when they’re in town.  Savvy!!!!  He also suggested for us to rent out a 40ft storage container – love it.

We thanked him + then made our way to Calgary to check out where more trailers go to die.

Jim showed us multiple trailers to rent +/or buy off of him.  He was honest + forthright about the complications about owning a trailer, driving it to Vancouver, all the permits you would need, etc.  At this point it seemed like more trouble than it was worth.  I asked Jeff, “Why are you so hell bent on buying a trailer?”  His response was, “All boys dream of owning their own transport trailer!”.  Ah, men.  This is a prime example of why women exist.  We decided on renting the storage container from Keith.  Here’s Jeff making deals over the phone – because that’s what he does. 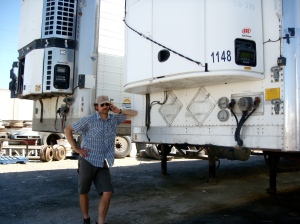 After we talked to Keith to solidify the container, we ran an enormous amount of errands.  Jeff renewed our membership at Costco to get ready for Hawaii.

Those of you who are nearest + dearest to me know it is the kiss of death to go into a Costco with Jeff.  It’s like Cesar’s Palace for him + he would never know how long he’d been in there for.  After was a lovely lunch at Ikea.

And then to some random hunting store. 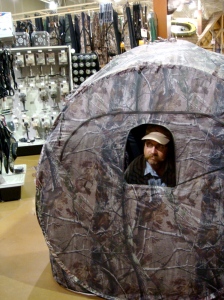 I didn’t know that Barbie + Hannah Montana made fishing poles.  Did you?

At the end of the day Jeff dragged me to the set of “Hell on Wheels”  where he had unfinished notes to work on in his book.  They were still shooting, but thankfully + mercifully his awesome team let him wrap out early because we had so much to do. As most of you know, set is the last place I want to be. But, Jeff loves it + is always so happy + excited to introduce me to everyone.  Here he is with his amazing costume team.  My dear friend Heather is at Jeff’s top left.  I met Heather on Inception + she was the first person I confessed to about my feelings for Jeff.  We’ve kept in touch but it was the first time I’ve seen her since then, so it was an emotional reunion. 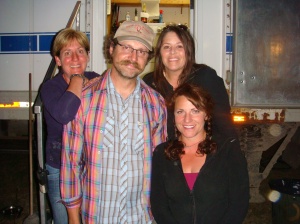 I took a picture of Jeff with Common, but I’m not allowed to show him in costume due to confidentiality agreements which I think are ridiculous.  Common + Jeff were having such a bromance right before my eyes + it was so cute that I had to have a Jeff/Common hug sandwich.  All the crew + actors that I met were so genuinely nice + it was so great to hear them all say such nice things about Jeff.  I think the show is going to blessed because of all the blood, sweat + tears the cast + crew have invested in this show.  We didn’t get home until 1am.  The long drive to Canmore was really difficult, I’m not gonna lie.

Today we kicked ass.  It’s because Jeff put on his “Hell on Wheels” crew tshirt. 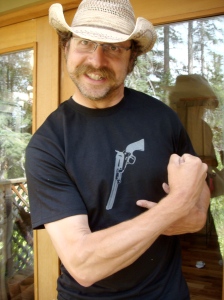 We did a round to the thrift store which is my favorite thing to do because that means we’re getting rid of his enormous amount of stuff.  After that, we went to check on Jeff’s old Chrysler + his old buddy Ed who lives near by came to say hello.  This was definitely the highlight of my day.  Check out his sweet ride that he brought back from the dead:

Look at his beautiful lion’s mane being tousled by the wind.

Jeff rented a cube van from my favorite Budget rent a car.  We loaded 3/4 of his massive garage into this van.  Here are the proud first boxes into the cube van:

This is Jeff in his cube van visionary pose. 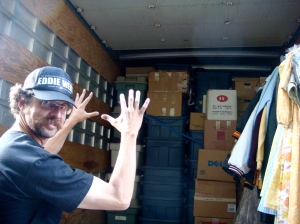 We loaded that thing 3/4 full.  Seriously, thank god I’m freakishly strong.  Then we went to his second storage space + loaded the rest of the van.  I’ll post a pic of the cube van bursting at the seams later because we were both so tired + cranky at 10:30pm to really do much of anything.  Today we will be loading the stuff into the storage container + going back to do another load.  As Jeff said, “It’s a good thing I got the ring on your finger before we started tackling this.”  Well played, my good sir.  Well played.