Hiking Stawamus Chief – aka Flirting with Death on My 37th Birthday

Dear Mom, Dad + Ashley.  It would would probably be in your best interest to skip this post, as viewer discretion is advised.

Note: Since I have written this post, a hiker has died at the Chief while hiking alone.  Where exactly she fell from + how she lost her footing is unknown.  A horrible tragedy + it’s no joke!  Don’t go hiking by yourself!  Bring a buddy!!!

When people move to Los Angeles, their parents are always afraid their children are going to be mugged or carjacked.  Since moving to Canada, my parents are afraid that I’m going to be eaten by a bear or die alone in the wilderness.

Jeff has been working in beautiful Squamish this week, so I took the opportunity to do some exploring.  It’s an hour drive north of downtown Vancouver, surrounded by mountains + is a nature lover’s paradise.  I decided for my birthday to go out for a hike + be encompassed in the warm bosom of breathtaking British Columbia!!!  Stawamus Chief is a popular tourist destination + so I thought to myself, “Well, if it’s well traveled trail, I can go by myself – there’d be less chance of getting mauled by a bear!”.  Oh ho, bears were THE LEAST of my worries, my friends…..

This trail is NOT a walk in the park!!!!  Some websites claim this is a good “beginner hike for visitors”.  Pishaw!!!!  They can bite me!!!! Uphill forever!!!

I went rrrrreallllyyyyy slooooooow.  I walked in a “switchback” style – as in a zig zag pattern – I tried to avoid going straight up the trail as much as possible.  This was my attempt at trying to preserve my energy.  Slow + steady y’all.

I liked this old sign embedded high up in the tree.

Oh man, my legs were burning but I didn’t stop to rest much because then it would’ve been harder to get going again.  I kept that momentum consistent, peeps. 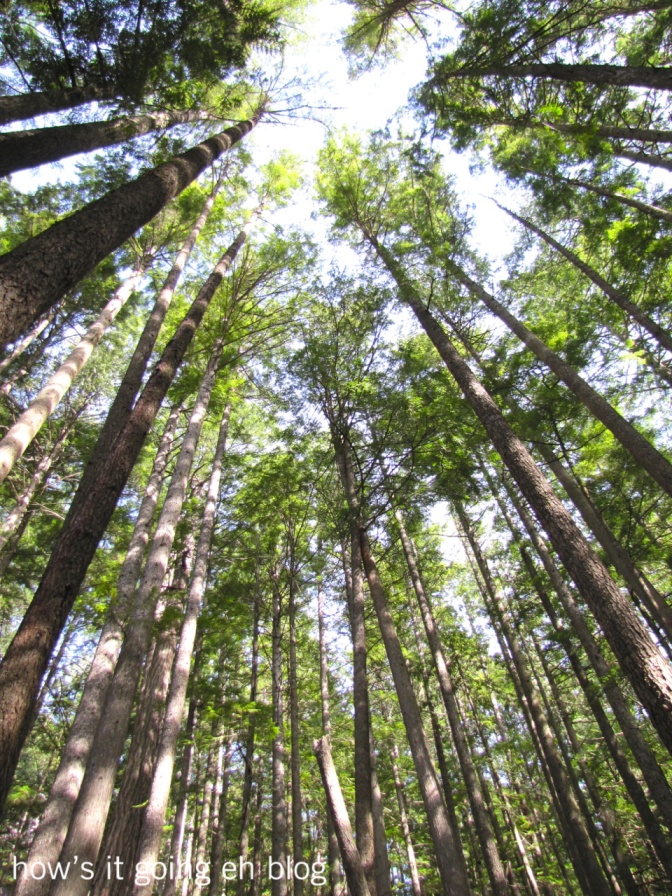 This next picture looks like a scramble of rocks, no?  Uh, think again – that’s the trail!!!  My short ass legs were having a hell of a time stepping up onto these large rocks!!!  And this is what a majority of the hike is like! 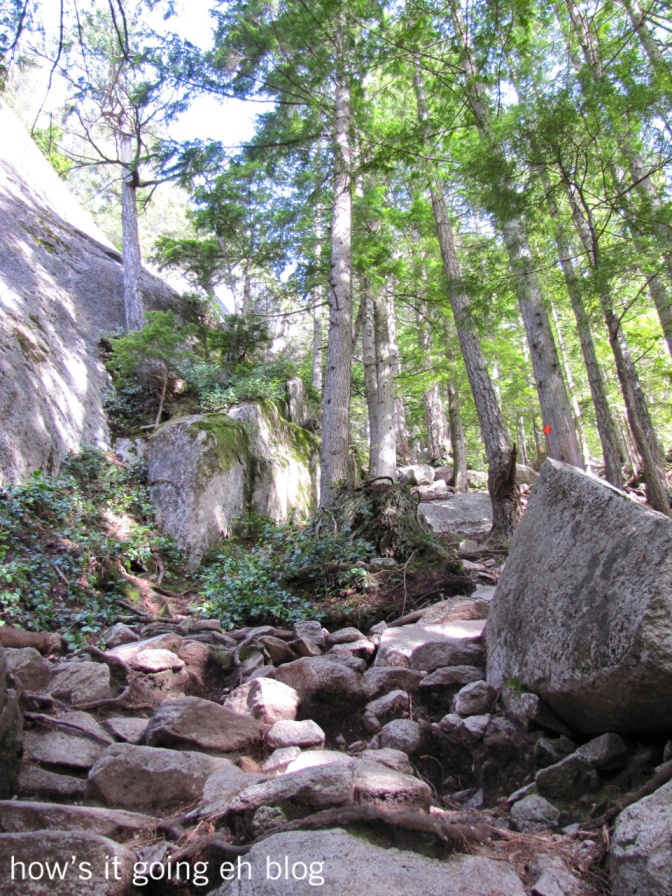 The trails are well maintained but a little confusing – even more so toward the end as I’ll soon illustrate!!!  There are little red markers on the trees to show you’re on the right path. 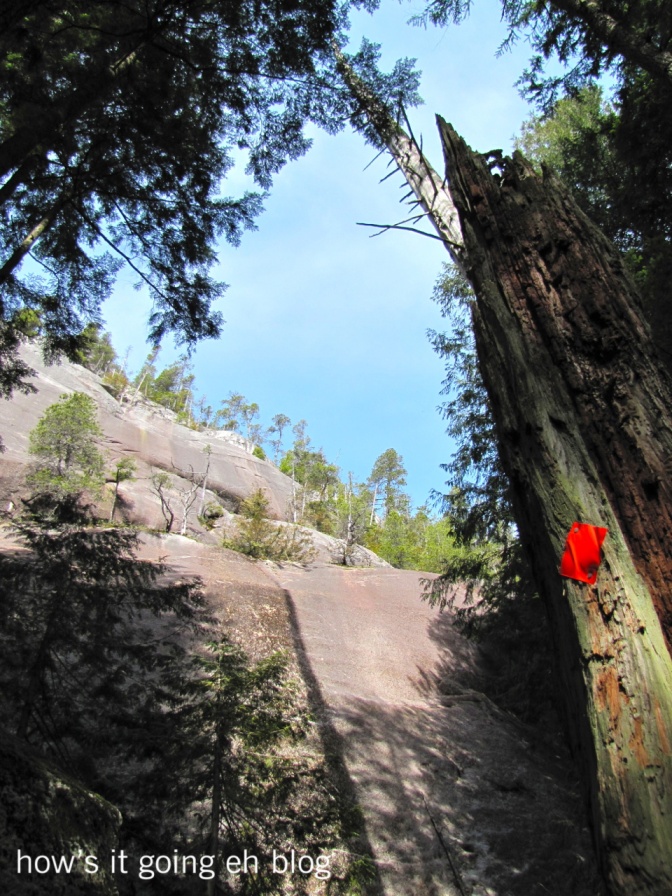 And here my troubles began……oh, Stawamus Chief you are but a trickster + a wanton foe!!!!!  There are three peaks to hike on the Chief.  I read somewhere to bypass the 1st peak + head straight to the 2nd.  Okay.  I had passed the trail to the 1st peak + I finally arrive to the top of the 2nd peak trail after about an hour + a half of hiking straight up.  Two girls were in front of me + to the left was a foreboding sign.  I took the time to take a picture, so you would have thought that I had the sense to read it + take heed.

DO NOT GO UP THIS PATH OF HELL LIKE I DID!!!!  This “ladder” is just rungs made of rebar stuck into the rock face.  NOT placed by the park, but by just some guy, whoevertheheckheis!!!!

And it’s a SRAIGHT VERTICAL CLIMB UP!!!! 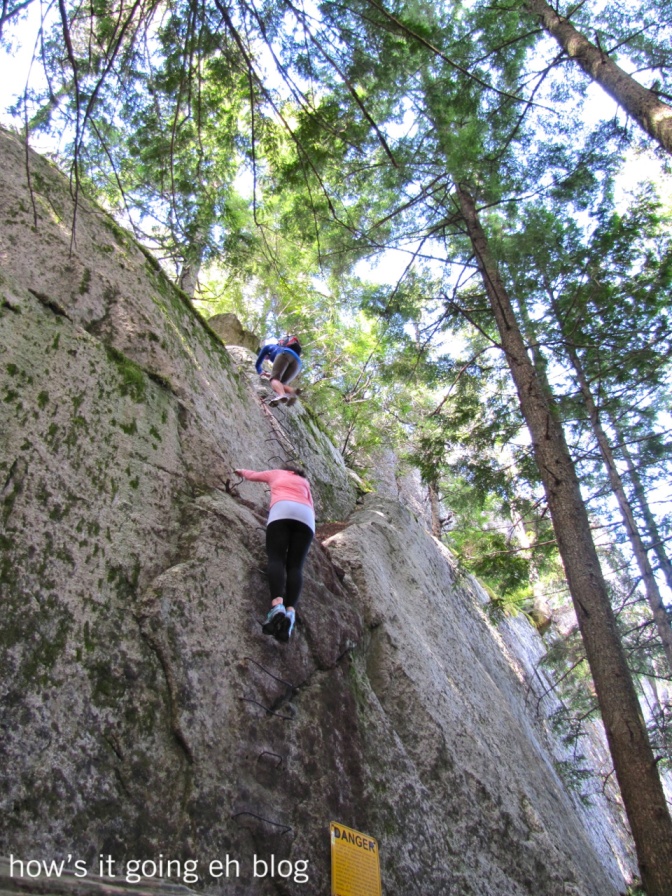 I almost turned around but I thought, “I did not hike up this mountain for an hour + a half to reach the 2nd peak + turn around!”.  I just assumed that this was the only way up, so I started up the ladder + I madly repeated to myself, “What would Keith Richards do?!  What would Keith Richards do?!?!?!”.  Sometimes when I’m feeling like a wuss I say this to psych myself out, so I’ll stop being such a whiny wuss – because Keith Richards would be like, “Oy!!!!  Quit being such a wank + go on!!!!!”. 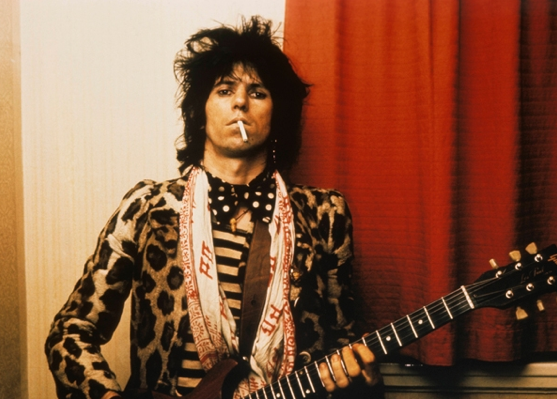 OMIGOD IT WAS SO SCARY!!!!!  And then there were these really poorly placed (note: really bad for short arms + short legs) smaller widely placed rungs, a chain rope + wet, slippery rock.  NO BUENO, PEOPLE!!!!!

As I was midway up, gripping onto the chain rope I took a picture of Garibaldi mountain.  Smart, Shelli.  You’re almost diagonal, holding onto a chain rope with one hand + you stop to take a picture.  Genius. 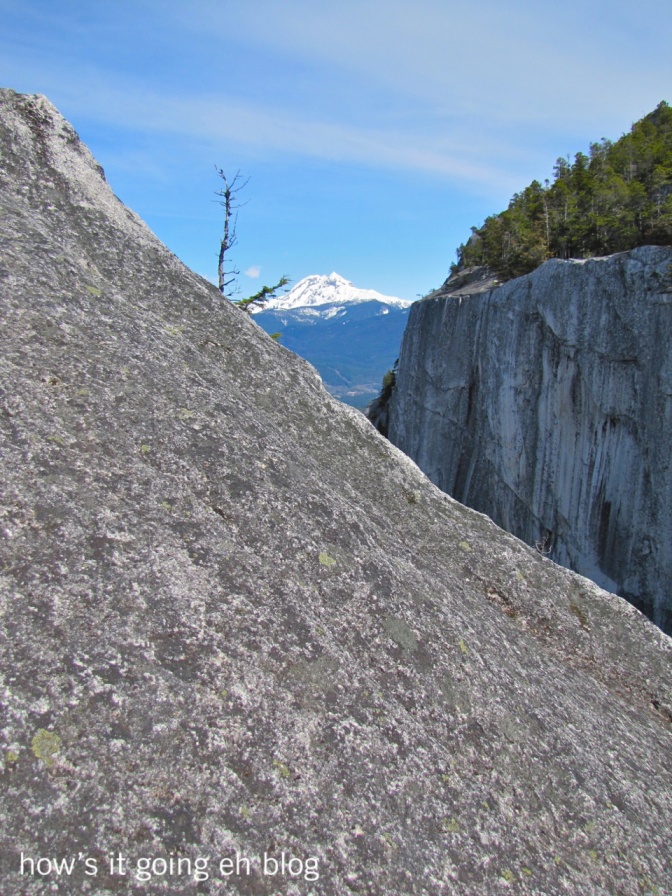 I reach the top + my body is BUZZING with adrenaline!!!  I ravenously ate the turkey sandwich I bought from the amazing local Sunflower Bakery Cafe in downtown Squamish. 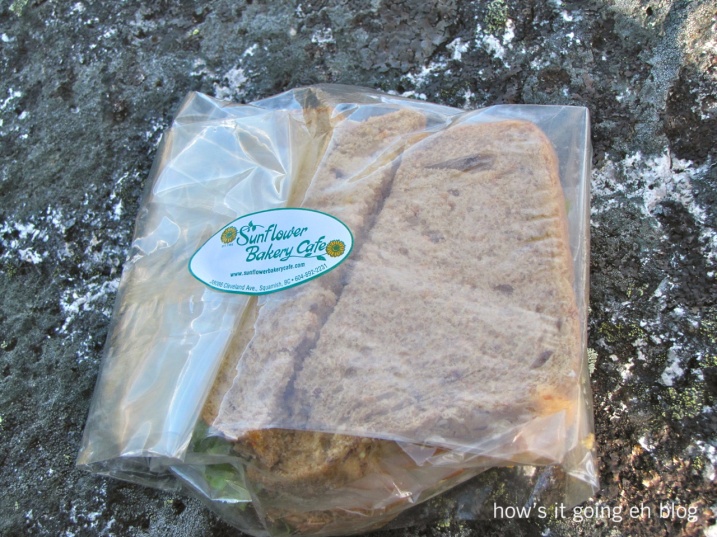 The views were absolutely gorgeous.

As I was eating, from up above on a rock I heard voices + a barking dog.  Como say what?!  How the heck did a dog get up there?!  And out of nowhere a guy popped out.  I asked where he came from + he said, “From below the first peak!”.  Woah, woah, woah – what do you mean, that’s the first peak?  Where the people + dog are?  “Yeah, technically this is all part of the first peak as well.  Did you come up the side?  That’s the CRAZY way!!!!”.

Apparently, I (+ the girls in front of me) went to the LEFT + basically took a dangerous shortcut to the 1st peak.  To the RIGHT was more chain rope leading up to the 2nd peak.  DAMMIT!!!!

Oh yeah, next I desperately traversed down the side of the mountain alone, trying to find the official path back down the 1st peak to avoid the ladder of insanity.  I ended up on the side of the mountain with a straight drop off, scrambling for footing + I literally thought I’d get stuck there + no one would know where I was.  I managed to scurry back to where I ate lunch + was forced to go back down in a most unfavorable fashion from whence I came up.  Luckily, there was a group of unkempt, young looking rock climbers at the bottom.

I sheepishly called down, “Do you guys mind watching me as I come down?”.  Thank god they did cuz they would say, “No, no – move your foot a little left – okay you got it!” + “There’s a handhold over to your right!”.  I didn’t know that guardian angels took the form of dreadlocked caucasian rock climbers, but obviously mine do.  At this point I was like, “Screw this, I’m getting off this accursed mountain!”.

The climb down was steep + a killer on the knees + thighs.  My legs felt like wobbly Gumby.  I really wished they had an electric stairlift chair to take me down. 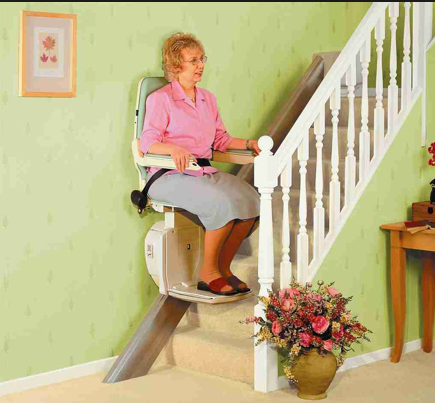 I would warn anyone coming up about AVOIDING the ladder + how to go up the 2nd peak the RIGHT WAY.

When I finally reached flat ground, I swear to god  I wanted to kiss the ground!  Today my legs are SO SORE + I’ve been walking around like an old broken down stunt man who did too many episodes of Bonanza!  I’m going to keep running + doing kettlebell training + at the end of this summer, I’m coming back for you, Chief!!!!  Oh yes, + IT’LL BE ON LIKE DONKEY KONG!!!!!!

Rule #1:  You don’t always have to listen to Keith Richards because sometimes he just wants to stir up your crazy.