Goodbye, Things! See You in Washington!!!

This morning the moving company came to take all of my things (belongings, stuff, junk, material burdens, accumulations) awaaaaay to faraway Washington to store while I await the Canadian immigration process!!!!  Goodbye, things!!!!! END_OF_DOCUMENT_TOKEN_TO_BE_REPLACED

Aaaaaah, working at nights.  How exhausted + turned around you make me.  You old foe.  I got off work this morning at 6:30 am.  The benefit to this was that I was able to witness a total lunar eclipse!!!  END_OF_DOCUMENT_TOKEN_TO_BE_REPLACED

When Jeff was visiting, we were taking a walk to the MOCA museum + decided to give the 99%ers a visit at City Hall.  It’s only a few blocks from my house + we thought we’d go see how the movement was chugging along.  All I can say is: ew.  END_OF_DOCUMENT_TOKEN_TO_BE_REPLACED

I’m starting to wrap my head around moving out of my condo + getting it ready to rent.  My real estate agent has started the process of finding potential renters yesterday.  The plan is to start moving everything to my mom + dad’s, keep most things in boxes, so that once that permanent residence card to Canada comes in the mail – I’M OUTTA HERE!!!!  I don’t want to have to mess around with moving +  finding a renter right before I leave for Vancouver.  Yuck.  I want to be ready, y’all.  Ready.

Plus, I’m trying to wean myself off of coffee, so it’s been slow to say the least.  I just do one small cup in the morning + regulate with tea in the afternoon.  It makes one feel like they have a styrofoam helmet on their head + took a pill that comes in a container that says, “do not operate with heavy machinery” on it.

But, let’s just say: listening to Dusty Springfield while cleaning + organizing = good.  As I was purging the condo, I looked around + became really sad.  I love my condo + my neighborhood!!! 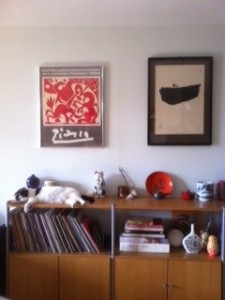 I’m going to miss it so much!

Oh, look at my sweet Megumi taking a snooze!!!!  She matches my decor.  How appropriate.  Heh heh. 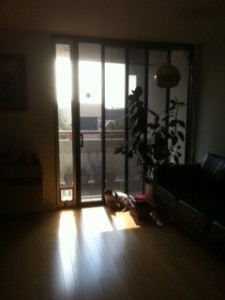 Yes.  Another picture with Megumi in it.  Now don’t say it all at once, I know!  I’m lucky I have Jeff or I would be “one of those costumers”.  I could be happy with a million animals running all over me + then a neighbor would report me to animal protective services.  Yes, thank god for Jeff.

Tonight, I finally watched, “An Officer and a Gentlemen”.  I don’t know why it’s been so long because I LOVE movies from the late 70’s/early 80’s (note: only early 80’s!!!  No John Hughes or Brat Pack for the love of god!!!)! And I LOVE Debra Winger, even though she can be a little annoying + whiny.  Richard Gere is pretty swoon worthy, even though he has teeny eyes + I got really excited watching all the military exercises.  I want to go to a boot camp!  Louis Gossett Jr. plays the gnarly drill sergeant + I kind of wanted to be like him. Is that weird?

I must admit, I got all girlie during the love story parts + cheered in the end.

Oh, earlier in the week I also watched, “Sophie’s Choice”.  I guess it was early 80’s film week for me.  I’ve seen it before, but I decided to torture myself for a second time.  Why???!!!!  WHYYYYYY???!!!!!!  I can’t even get into “Sophie’s Choice” because it’s too depressing + beautiful + you’ll just have to find out for yourselves.  Now I realize why I hadn’t seen it a second time.  Sob. 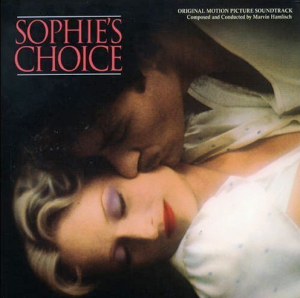 On a happy note, in the movie Kevin Kline is very handsome + charismatic with a very dashing moustache!!!!  Cha cha cha!  Oh, Meryl….sigh!!!!