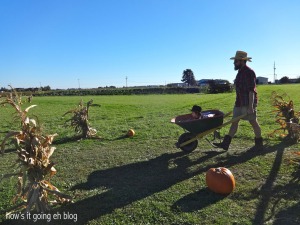 Happy Hallow…wait…it’s almost Christmas.  I don’t care – it was too cute not to share!

Plus, this post is a special request from a special friend.  Totally late to the game, but at least I showed up!  haha!

Every year we go to Westham Island Herb Farm in Ladner for pumpkins because it’s super sweet + charming! 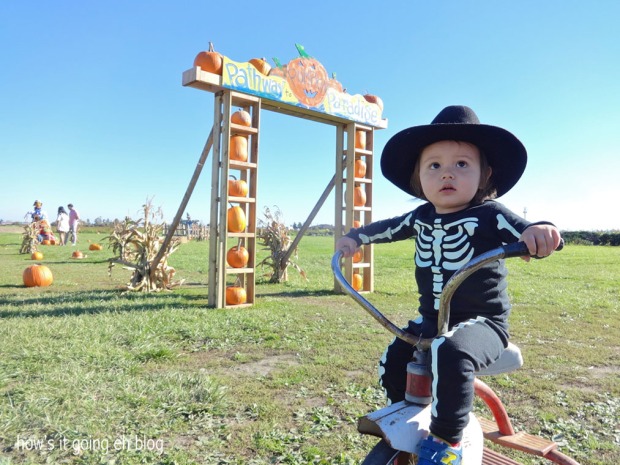 I love me some vibrant gourds! 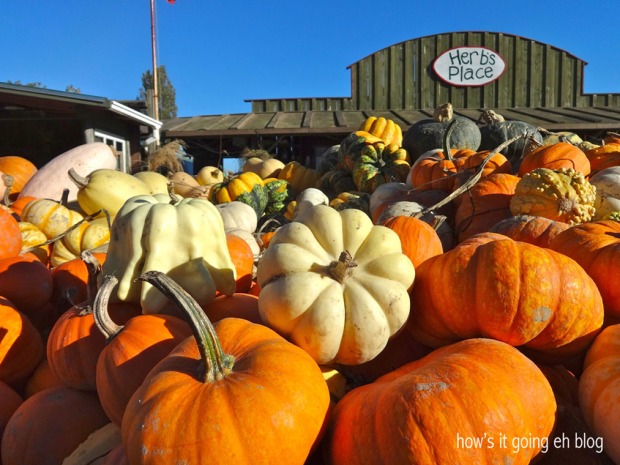 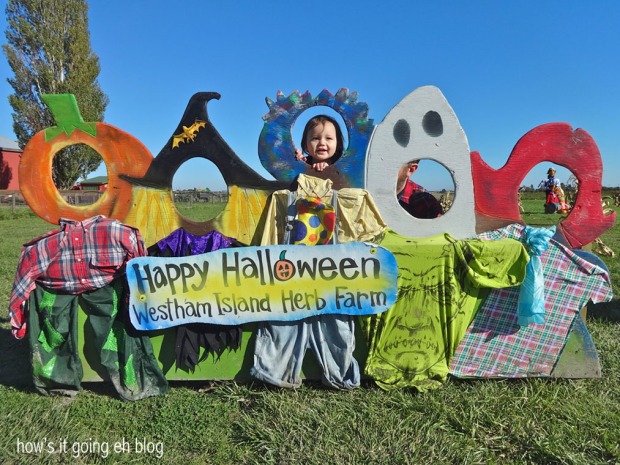 A skeleton cowboy’s trusty steed is a zebra, of course.  Or as the British pronounce it – ZEHBRAH. 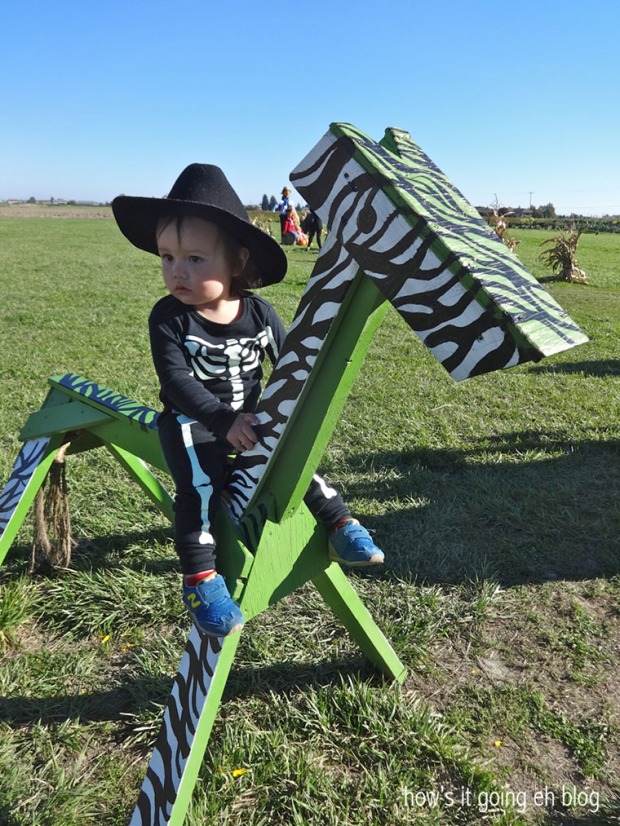 I swear to god, Langdon posed for this picture himself.  He went behind the ghost + put the hat on it’s head.  I kid you not. 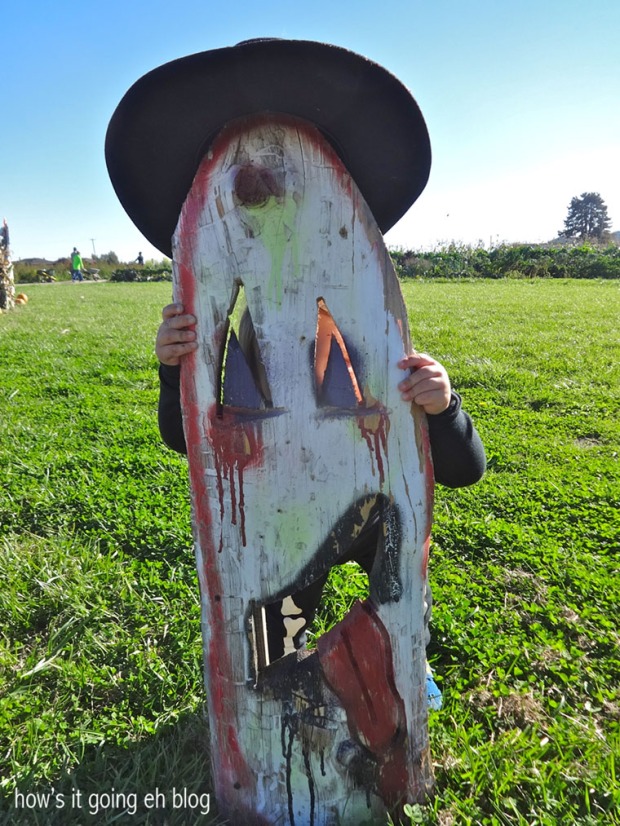 This is one of my all time favorite pictures of Langdon.  His expression is like, “DERP!!!”.  And that crooked hat!!! 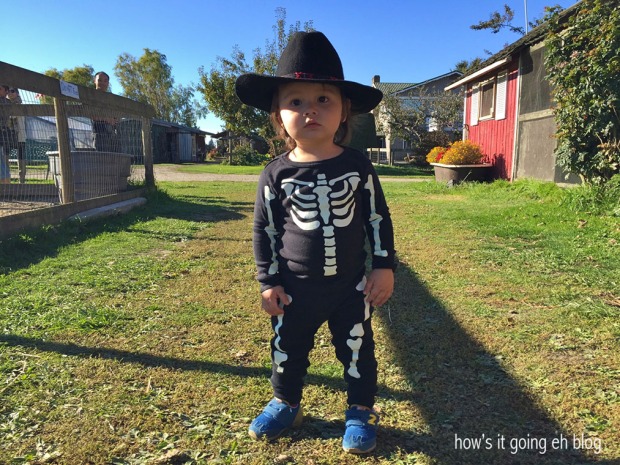 Picking out a pumpkin. 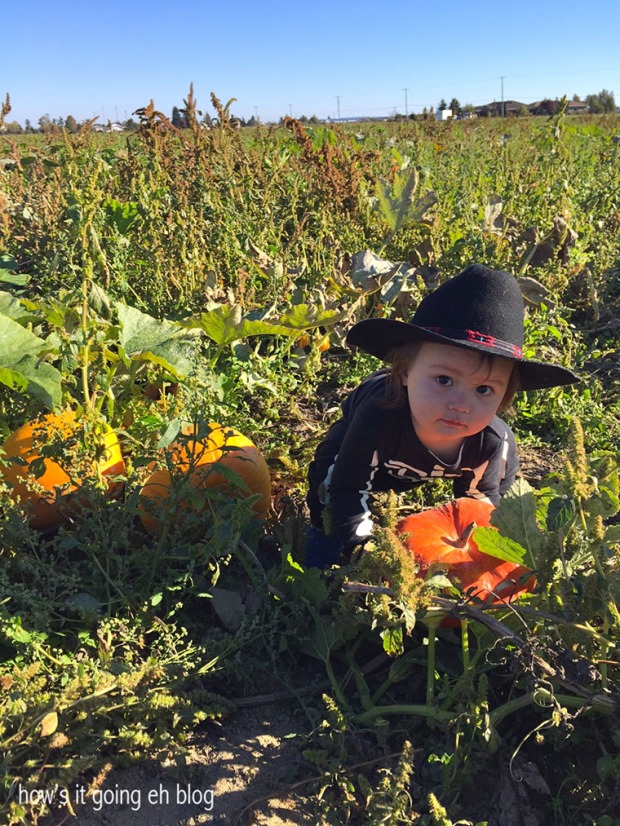 So excited + proud!  Last year he was feeling a little sick + it was freezing!!!  Check out last year’s Halloween cuteness + how wee he was!!!  Click on A Most Festive Fall Season! 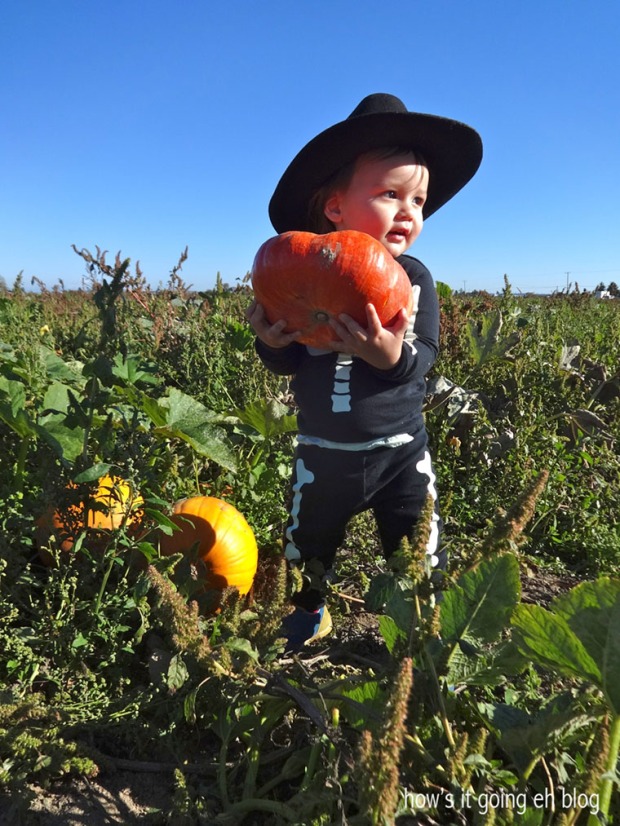 Now he’s a little man, by golly!  Dad got a wheelbarrow + got all serious about pumpkin hunting. 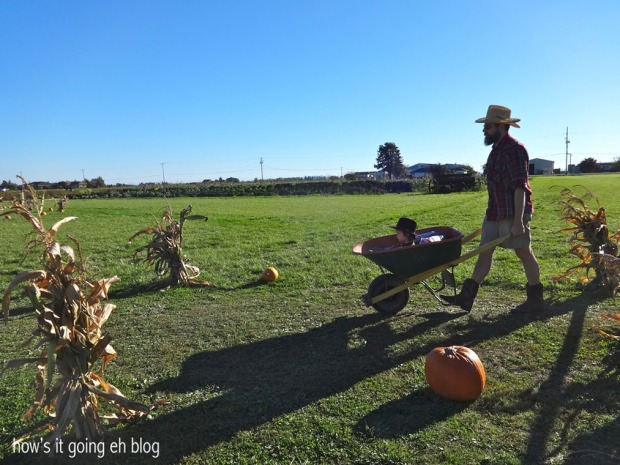 Langdon on the other hand swiftly escaped the wheelbarrow + ran across this soft, crumbly, earthy field which I’m not quite certain we were allowed to trample on. 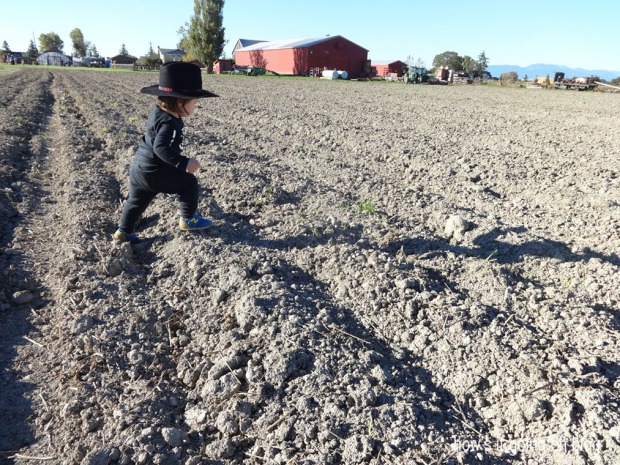 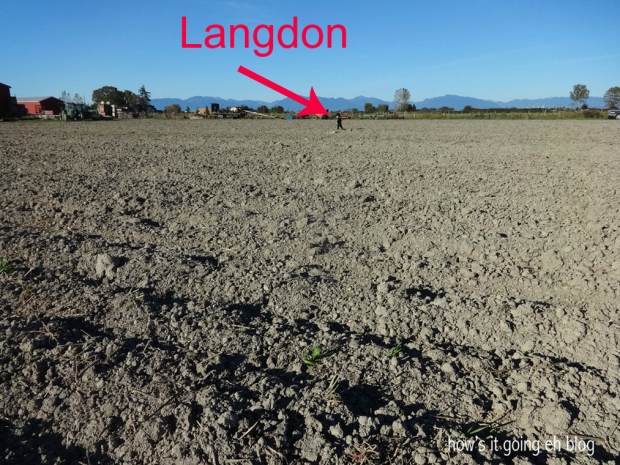 Then we played around old farming equipment which I’m sure was totally safe. 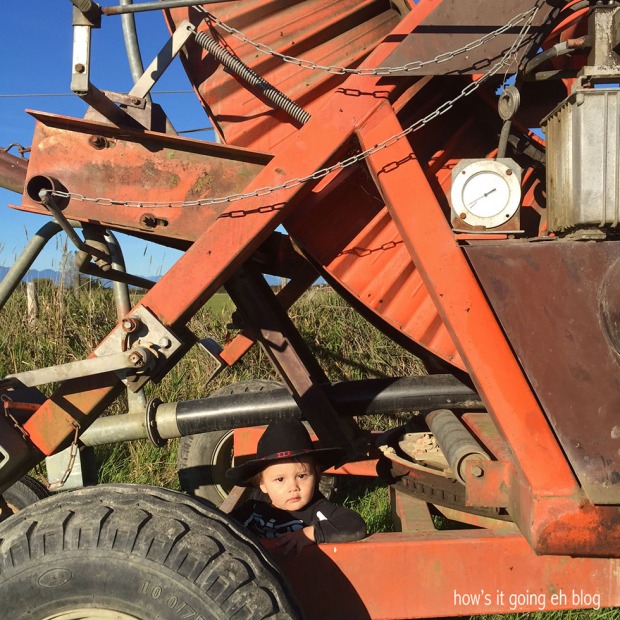 Langdon then spotted some cows in the distance + the escalating excitement was tantamount to delirium!!!!! 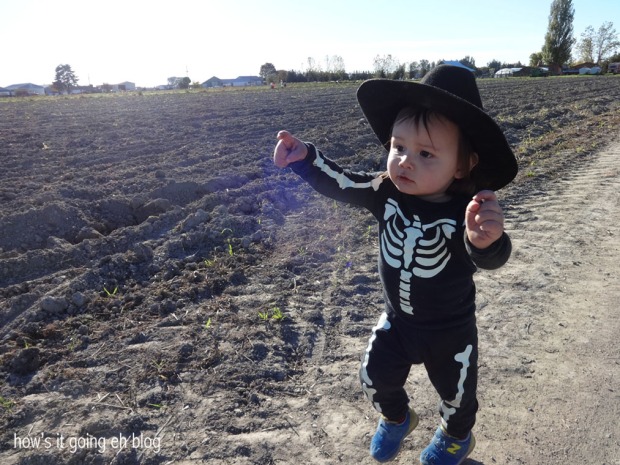 HAHAHAHAHAH!!!!  I was running + taking pictures while Langdon was running at full force.  My camera caught his chubby face jiggling with the motion of the running + it totally contorted it into a weird old man mask!!!!  HAHAHAHAHA!!!! 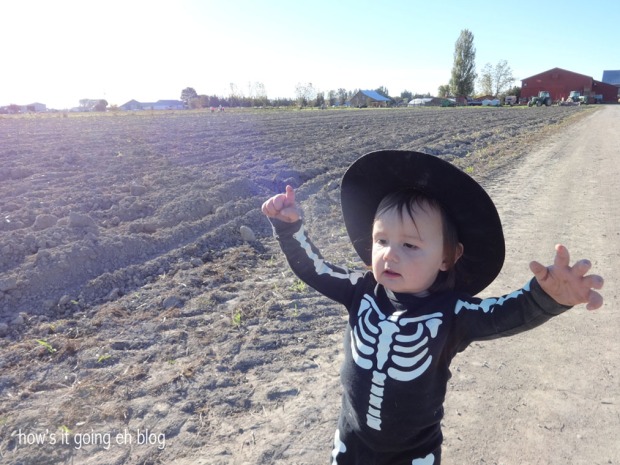 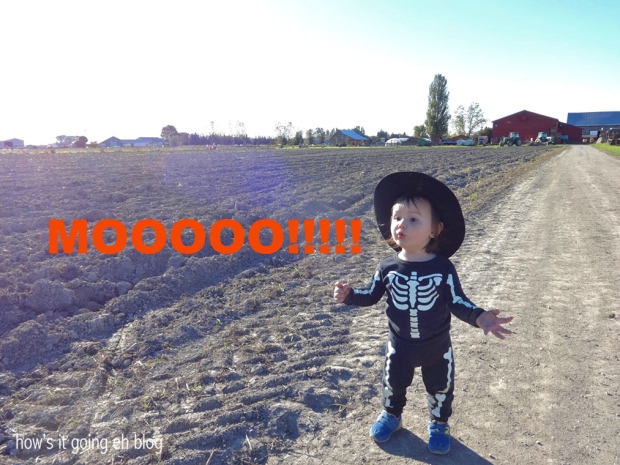 There’s also rabbits, goats, a donkey + chickens but Lang wasn’t as excited about them. 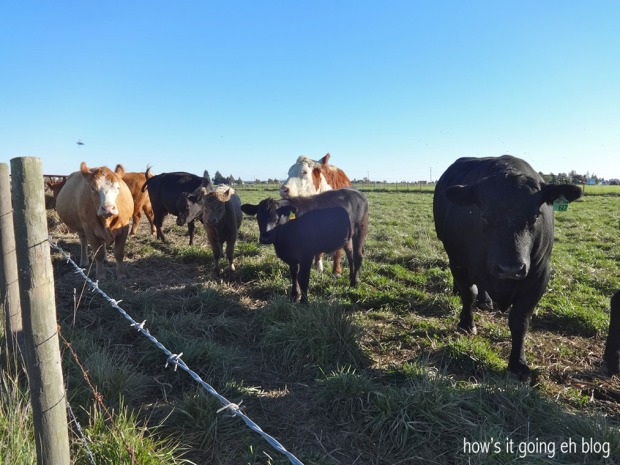 Ok geez!!!!  Now on to the actual holiday called Halloween!!!!  I found a really amazing tutorial online for a Totoro costume from You + Mie  that is really easy to follow.  I made my own pattern + sewed for two days!  I was really happy with the results!!!  If you don’t know who Totoro is, he is the most famous + most loved Japanese cartoon character of all time.  If you haven’t seen My Neighbor Totoro yet, WATCH IT!  It is sweet, heart warming, spiritual + unlike any Western animation movie. 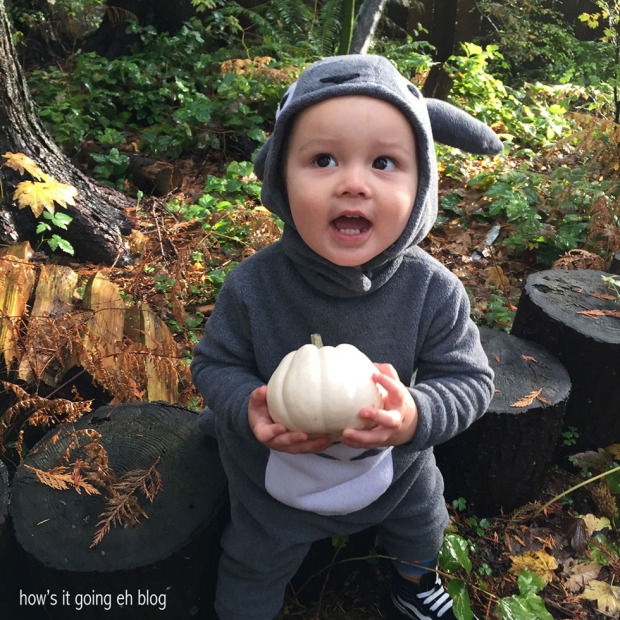 I made my own modifications here + there.  Like instead of a hood, I made a pilot cap pattern instead. 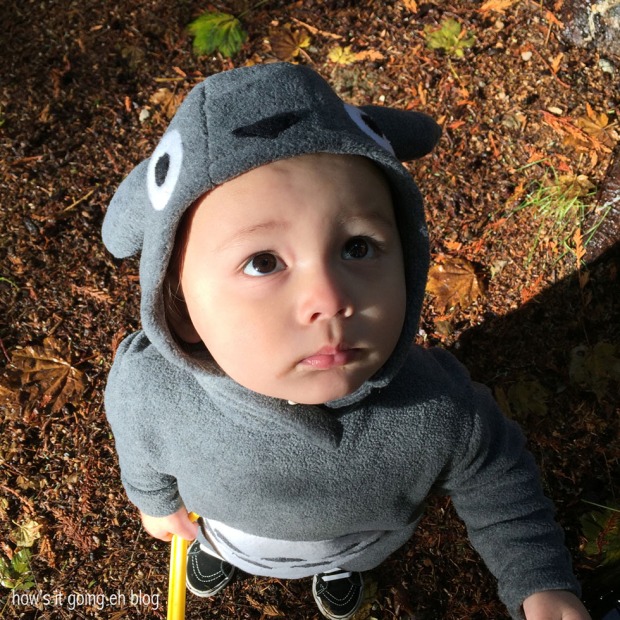 Do you know how hard it is to get good photos from a toddler???  Like nearly impossible.  I just noticed I’m saying “like” a lot in this post.  This is due to the fact that I’m dead tired + I originate from The Valley.  Fer shurrrrr. 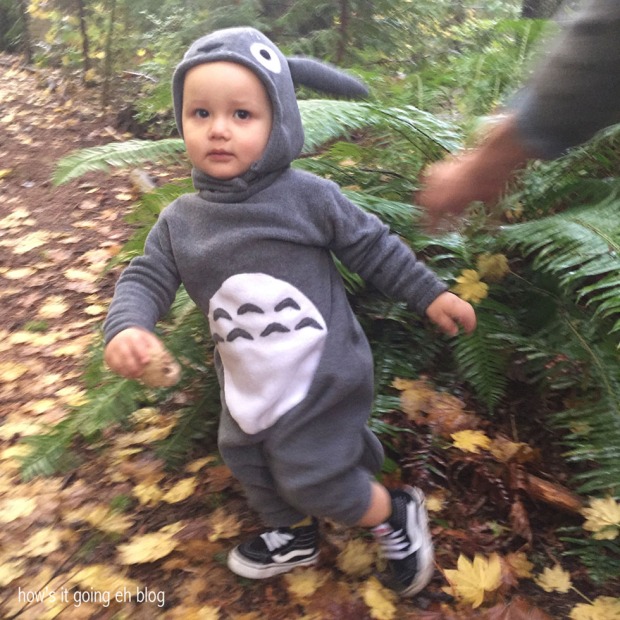 Look at his little tail! 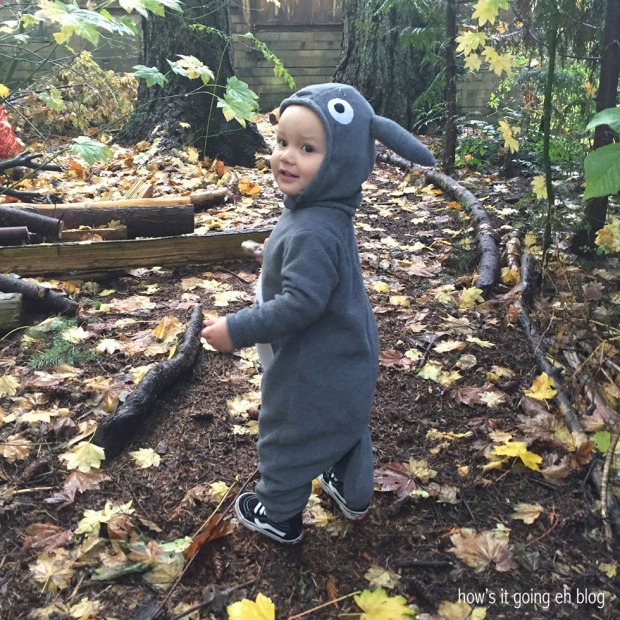 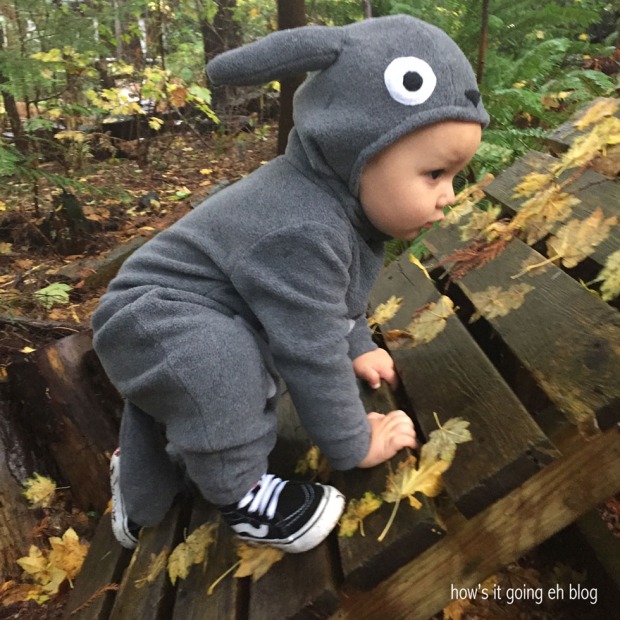 This Totoro was like RAAAAAAR DINOSAUR stomping through the forest. 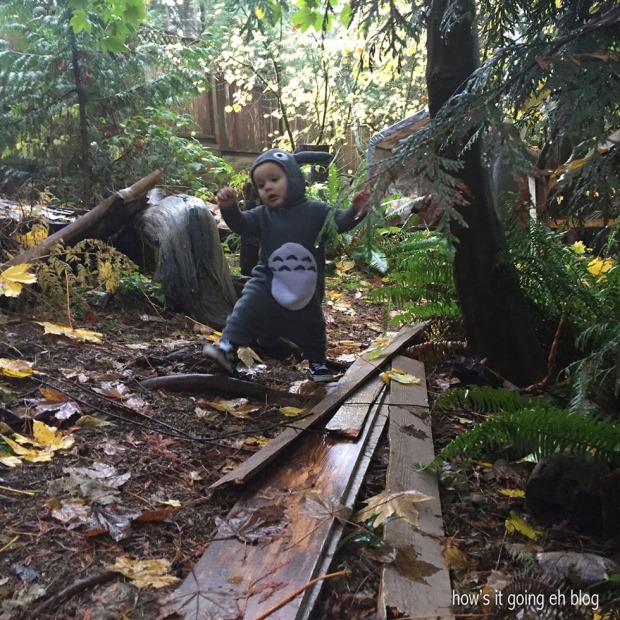 We helped Langdon’s cousin Tobin get ready in his Zombie Construction Worker costume.  Jeff + I made the costume for his big brother a couple years ago, completed by fake rebar sticking out of his chest!  I did the makeup + he was the walking dead for real!  Here they all are doing their best “UUUUUHHHHHHH” zombie moans.  Dad is in the back in his railroad engineer costume. 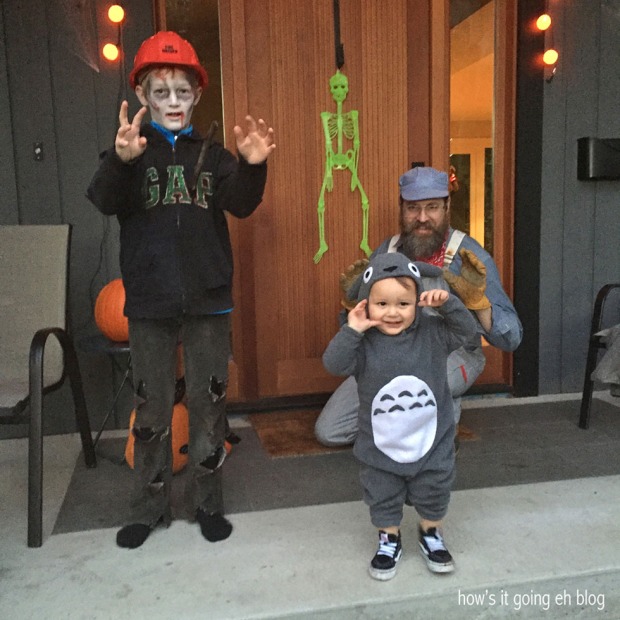 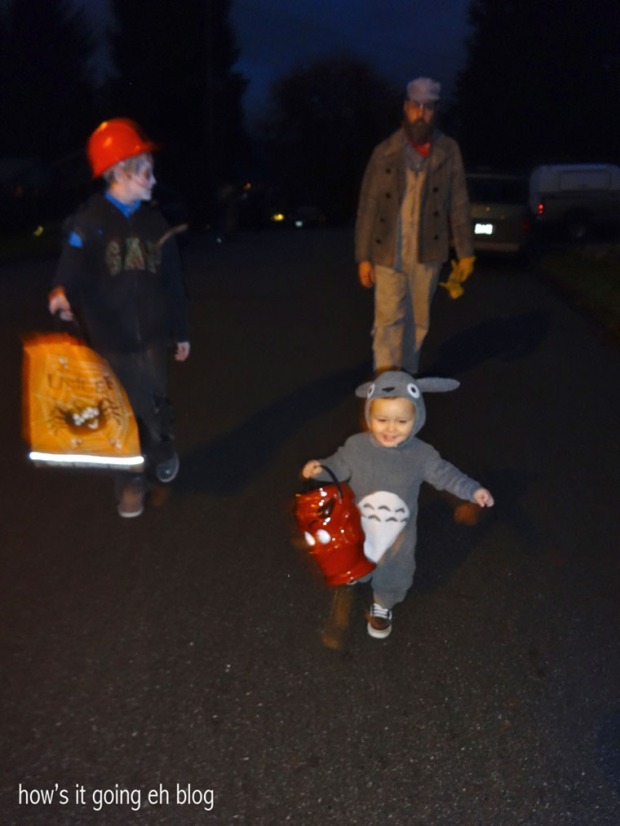 And it was really sweet because his cousin Tobin + all his friends would wait for Langdon at each house! 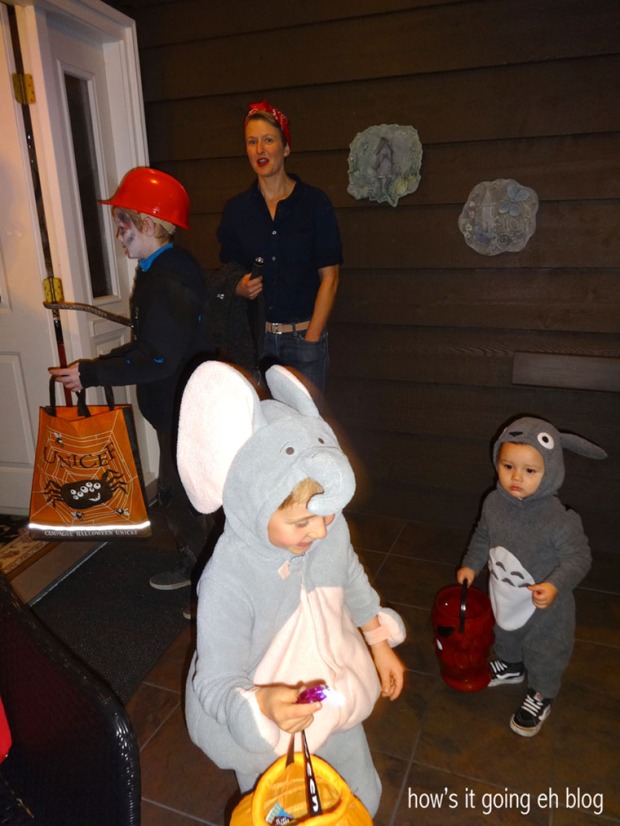 After a couple houses I was like, “Peace out, homies.” + went to my sister-in-law’s house to stuff my face with potato chips.  Also, did you know in Vancouver the city goes crazy with fireworks on Halloween?  Weird, right?  How + when did that all start?  This post ended up being really long, but I had to share!  So many good memories!  This family loves Halloween!!!!  Thanks for stopping by!