So much to do before Langdon + I leave for Los Angeles!  Aack!

Actually, I don’t really know what I’m doing writing a blog post because I have so much to do.  But it kind of helps me relax + wind down believe it or not.  And Langdon has been up to his usual antics which is difficult not to share!

Elegantly lounging on a mountain of sheepskin at Ikea – don’t you wish that was you?

Staring at himself in the mirror admiringly.

Dressing up in his girlfriend’s turkey costume for American Thanksgiving!  Yes they even share clothes!!!  Not so psyched.

Having a last play date with his girlfriend Madison.  We will miss her so!  Here they are fighting over the remote control.  Typical couple.  “I want to watch Walking Dead!  What?!  You promised me that tonight was The Mindy Project Night!!!”. 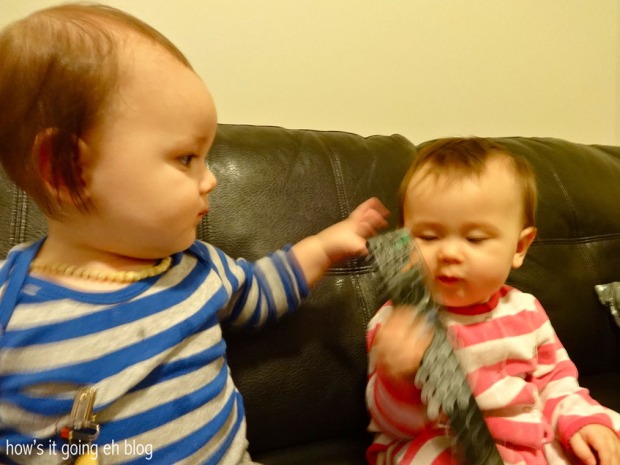 Dad has had American Thanksgiving off from work, so I’ve been giving him lots of Lang Lang responsibilities.  On the first day I found Jeff passed out with the baby after only 3 hours of caring for him.  Yeah try being alone with him ALL DAY + ALL NIGHT!!!

Applying for his Canadian passport.  Mr. Fancy Pants already has his US passport.  Dual citizen!!  What, what!!!!

We’ve been packing + making a complete disaster of the house, so today we went to Vancouver’s German Christmas Market.  The Grey Cup (Canada’s Super Bowl!  Yes, Canada has football leagues!!  Weird, right?!) was the same day, so we took the train to avoid traffic madness. 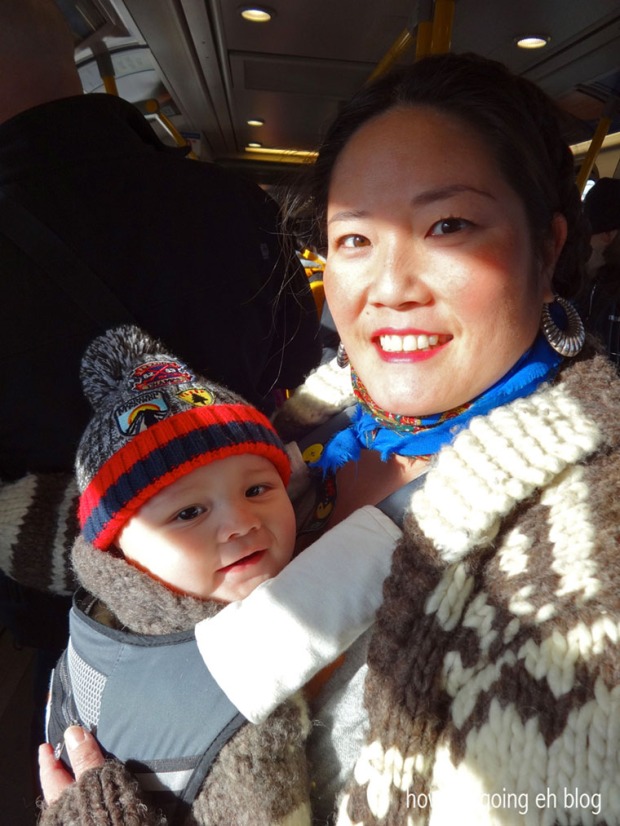 In front of the market’s big ol’ Christmas tree. 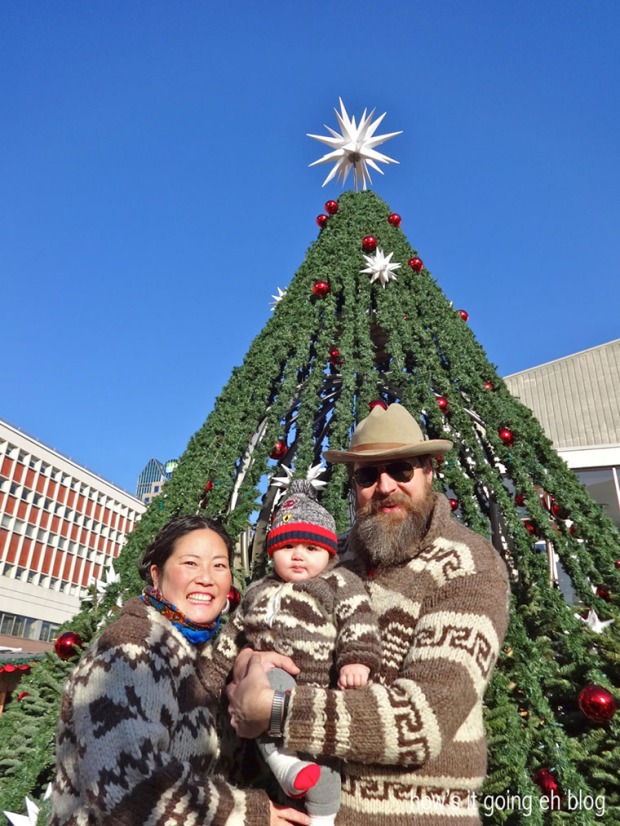 And yes, we are all wearing Cowichan sweaters.  And yes, we have become that family.  I’m going to make matching Aloha shirts for our first trip to Disneyland.  The Christmas Market was amazing as usual, but it was HELLA cold, so we stuffed our faces, bought a couple ornaments + high tailed it out of there tout suite!

In the same parking lot there was a ginormous RV + an amazing tailgate party of Calgary Stampeder fans.  I asked to take a picture of them + they were friendly, jolly + fun!!!!  Go Calgary!!!  They won the Grey Cup, just in case you were itching to know.

Don’t I look like a serious midget amongst the Stampeder fans?!  A lot of Canucks are freakishly tall.  Viking blood???

Afterwards we headed towards the North Shore to visit Auntie Debbie + Uncle Tom. 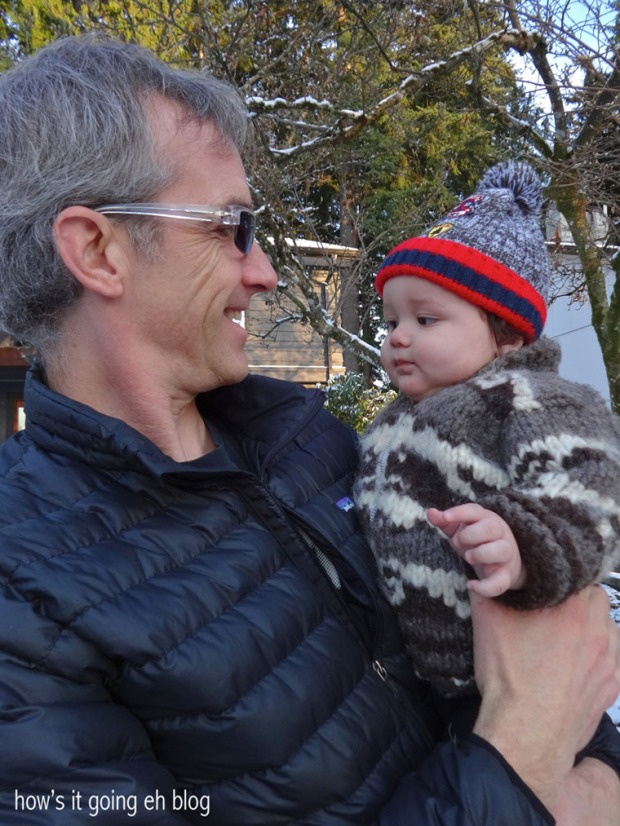 It has been crazy freezing in Vancouver with a dusting of snow!!!  Soak up the winter wonderland now, Lang Lang!  Soon we travel to the Land of the Sun!!!!  Californi-A!!!!  Huzzah!!!!

Auntie Debbie presented Langdon with some early Christmas presents!  His first one!!! 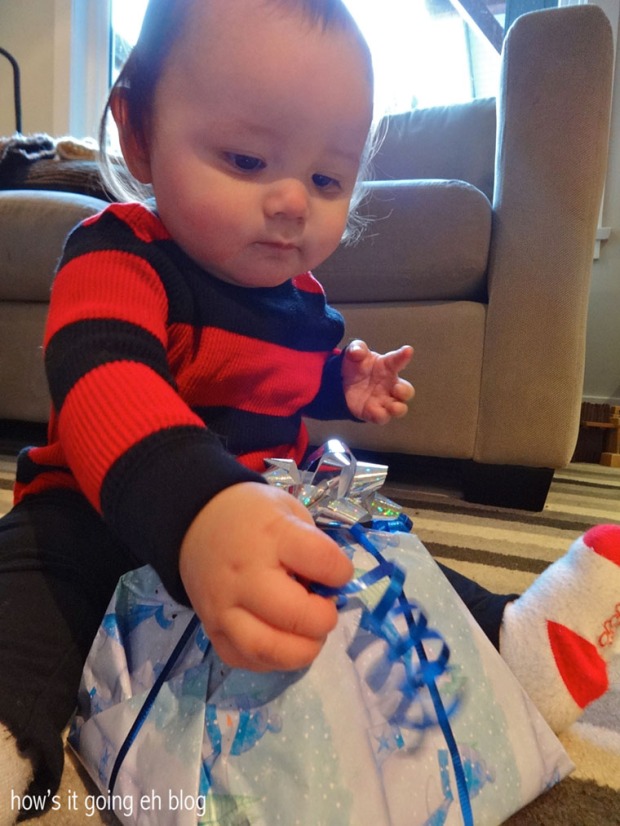 Ooooh!!!  Says Langdon.  He looooves his gift!  See he’s wearing the gift bow on his head like a magical gift unicorn!

Ok, so tired!  Gotta keep on keepin’ on packing + destroying the house while the bitty elf sleeps!!!  We’ll see y’all next time in LOS ANGELES!!!!!  WOOOOOOT!!!!