A New York girl in Alberta’s big city????  Let’s see how all of this shakes down….

It was Debbie’s 2nd day in Alberta, so I took her into Calgary for some city action.  It’s an hour drive from little Black Diamond, but since we are old pals, the drive just whizzed by with all the catching up we had to do!!!

Our main agenda for going into Calgary was to get Barn Passes from Jeff’s stunt/cowboy buddy, Jason Glass.  What are barn passes???  You’ll have to check in to the next post to find out.  Hint: barn passes involve the Calgary Stampede.  Oh, the intrigue!!!

Jason Glass is kind of a big deal in the rodeo world.

Here’s a picture of Jeff + I with Jason from last year’s Stampede.  Debbie + I were supposed to meet Jason at the Shaw GMC (everybody has a GMC pick up in Calgary – ask Debbie, she’s seen it first hand!) pancake breakfast.  Ok, so much explaining to do about so many Alberta – specific things!  Pancake breakfast happens during Stampede week, where certain locations serve free flapjacks, bacon, sausage + whatnot – the city has been maintaining this Stampede tradition since 1923, y’all!  Find your nearest pancake breakfast at Flap Jack Finder!!

After we parked, the first thing I saw careening down the road was this: 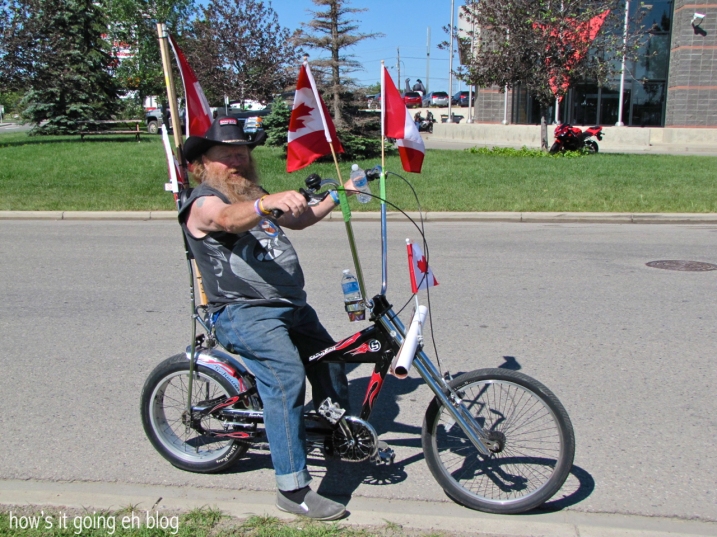 “WOOOHOOOO!!!!!” I screamed as I pumped my fist in the air.  “CAN I GET A PICTURE OF YOU!?  I’M AMERICAN!!!!” I blurted out, as if that was an explanation for my turrets-like screaming.  “And your point is?” he retorted back at me.  Nice!!!  A Canuck that says what he thinks!!!  Usually I dish out my, “I’m American” line + most Canadians respond politely by smiling + nodding.

Not this guy!  A true original!!!  “Red” aka “Santa Claus” aka “Papa Smurf” aka “ZZ Top” had just come back from Shaw GMC.  We asked him if Jason Glass was still around + alas Jason had left 10 minutes prior – Red would know because he’s a huge fan + had been to 2 other events that Jason had made an appearance at.  Like I said, Jason’s kind of a big deal.

Yikes, Jeff is going to be so mad that we missed Jason.  Well, the Hutterites definitely didn’t miss Jason.  They are HUGE fans!!!

No point crying over spilled milk!  Debbie + I headed into downtown + on the way I noticed the Smithbilt warehouse.  I made a crazy illegal U turn + parked it right out in front!  Why?  Smithbilt is a Calgary institution!  Building, restoring + repairing cowboy hats for Calgary since 1912!!!  Here’s Debbie getting her cowgirl on!

Close in vicinity to Smithbilt is the neighborhood of Inglewood.  It’s kind of like Venice beach’s Abbot Kinney.  Kind of laid back.  Kind of bohemian.  Kind of artsy.  My first time visiting  Inglewood was for the Jane’s Walk tour + I really dig it’s atmosphere.  We stopped by the Esker Foundation to check out their current exhibits.

You’re not allowed to take pictures of the art, but there’s a sitting space that gives a most amazing view of downtown Calgary.

The Esker gallery is beautifully laid out + such an exciting, fresh addition to the community of Calgary.  The building it’s located in also has a well stocked gourmet market + cafe on the bottom floor that is definitely worth stopping at.

We headed into the core of downtown Calgary + decided to walk around to see what we could find.  This is one of my favorite buildings.  The Bow, completed in 2012, is one of the tallest skyscrapers in Canada outside of Toronto.

The Bow had Stampede special teepees in front of the building.  I made Debbie pose in front as if to seem that she was inside the teepee.  Lots of grumbling. 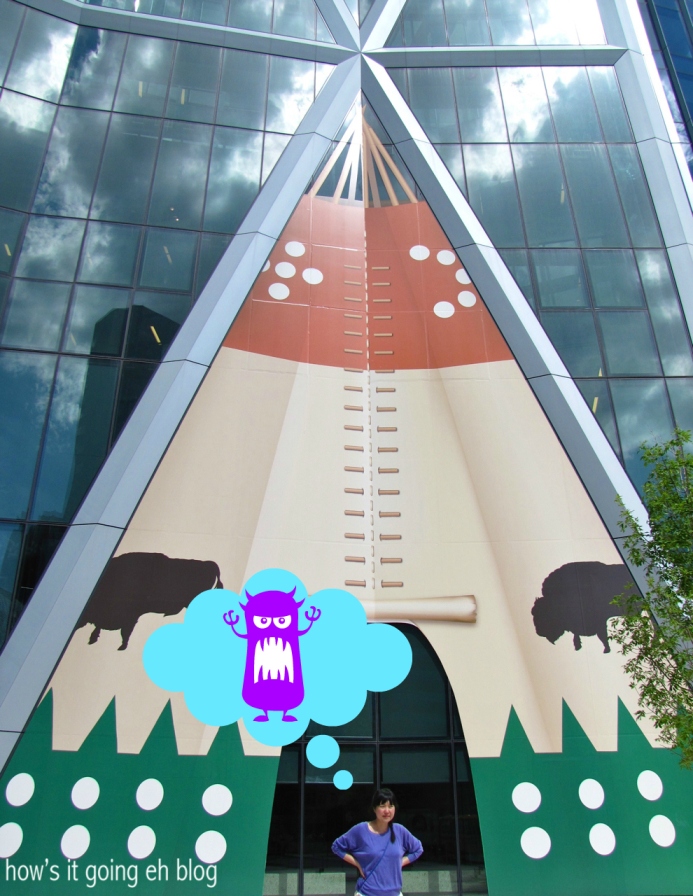 Fun, n’est pas???  Here is “Wonderland”, Spanish sculptor Juame Plensa’s wire mesh creation.  There is a door that allows you to walk inside the head if the mood strikes you.

Most of it’s allure is in it’s predominantly sandstone buildings that were built after the fire of 1886 which destroyed the majority of the city.  On my first visit to Calgary I showcased Stephen Avenue in a not so shiny light in this post.  But nay!!!  I have changed my tune significantly in the past two years!!!  I love me some Calgary!!!

Hay bales + hitching posts were placed on every corner for Stampede!  “Is this how it always looks in Calgary?” Debbie asked.  “Oh ho ho, my dear Debbie…….NO.” I smugly replied with my years of Canadian expertise on my belt. 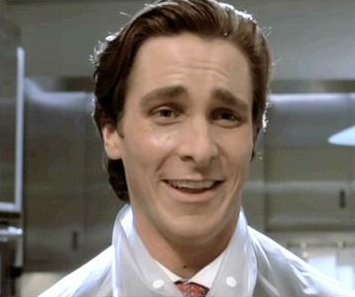 Christian Bale Smug Face = me, if you didn’t get the gist.

I forced Debbie to take a picture in front of some haystacks as proof.  I directed her, “Asian girl pose!” + voila she instantly knew what I was talking about.  So cutesy!  Yo, Asian sistahs telepathically speak the same language!!! 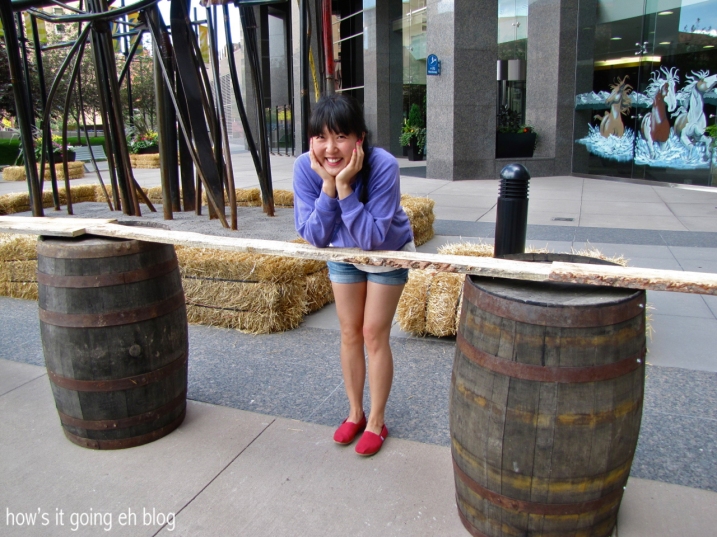 Stephen Avenue is definitely a must visit for it’s turn of the century architectural elements.  Here are some fantastic art deco wild west motifs in a window sill.

For Stampede there were dozens of pop up tents selling cheap, shoddily made western theme goods for purchase.  Don’t buy them!!!  The cowboy hats are poor quality, horrible + way too pricey!!!  Go all the way + buy a Smithbillt hat or a vintage score at a thrift store! 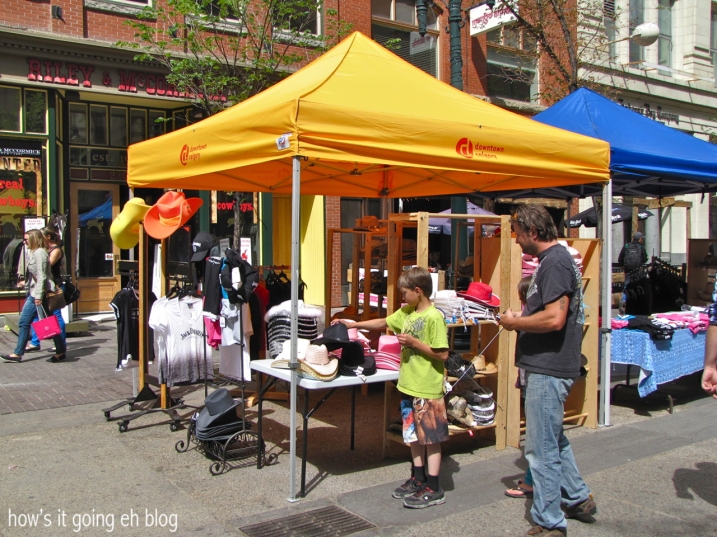 You know that there will always be street performers…here are some kids putting on some expressionist dance set to music.  I’m instantly intrigued….what in Sam Hill is going on here?! 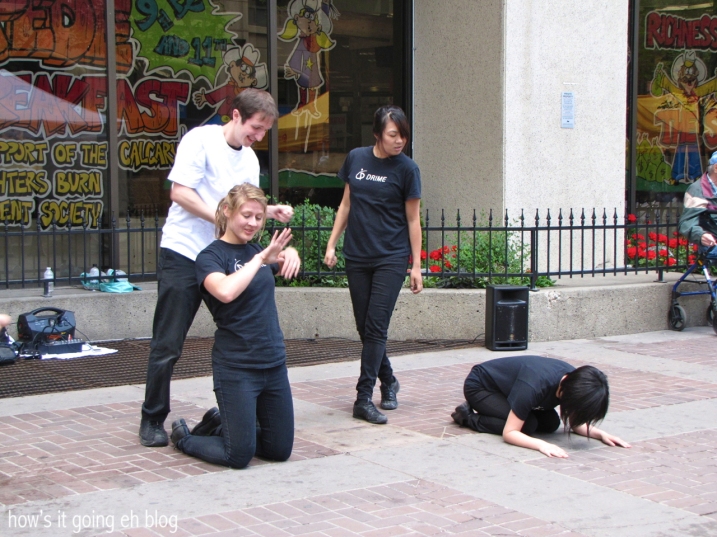 Is this magical guy a wizard?  Merlin?  Gandalf?  Harry Potter??? 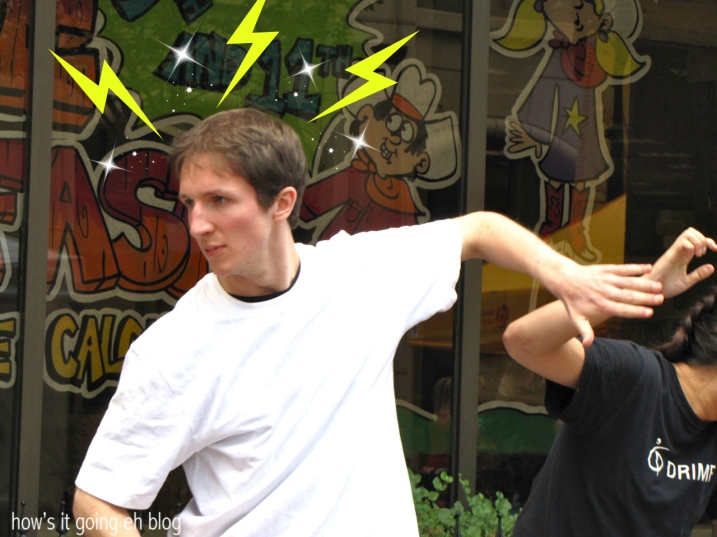 Is this angry girl in the bottom right hand corner channeling Satan, Suri Cruise or is she just a girl that really needs a sandwich???

I relish in this stuff + was happily shooting multiple pictures of these kids.  When I was satisfied, I searched for Debbie + she was warily standing three feet away, keeping her distance.  I love this kind of performance art!  Bear your hearts, kids! 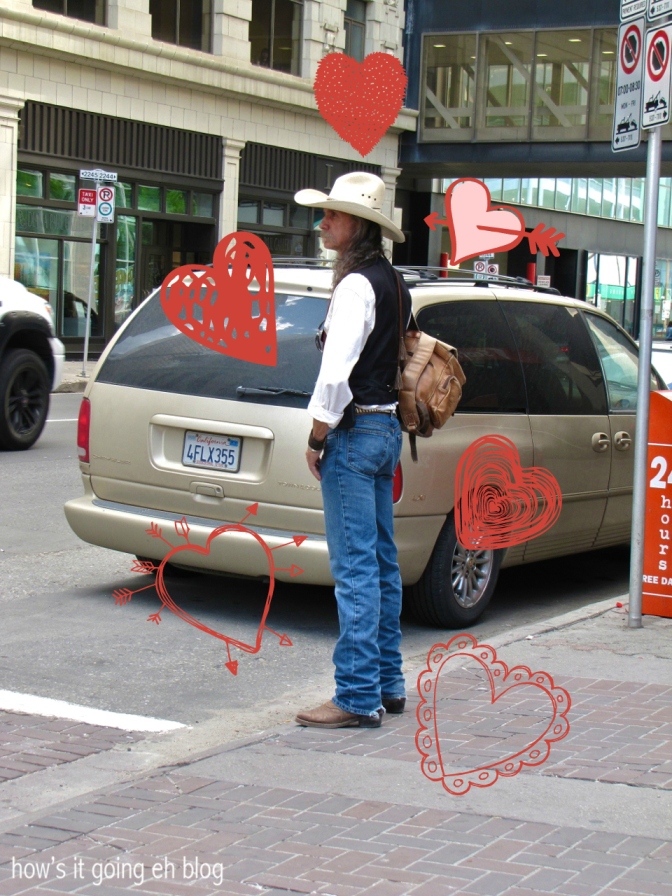 Sam Elliot eat your heart out!  And POOF!!!!  He was gone, just like that…a mirage.  Well played stylish/classic cowboy…well played. 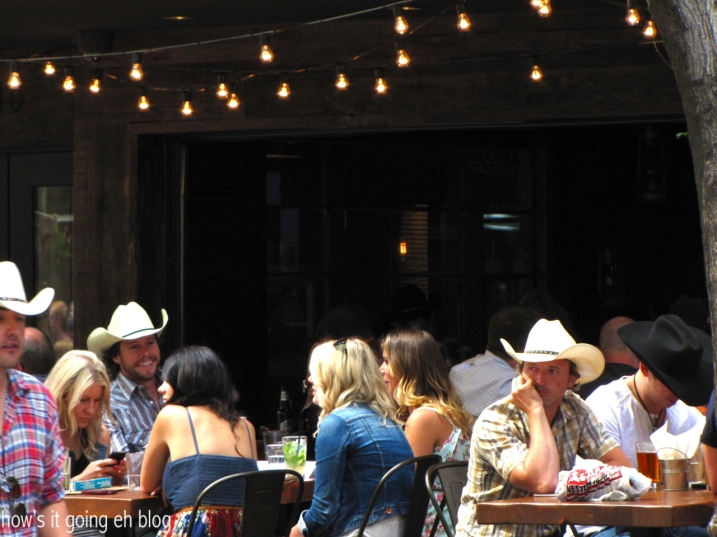 I had to take a picture of this.  RBC is a bank in Canada + even their little mascot got all gussied up for Stampede!!!

Welcome to Calgary, y’all!!!  The wild wild west of Canada!