Saturday was a beautiful day to take part in two Jane’s Walks to learn more about Calgary + urban development.  How do submachine guns fit in?  Well read on!

My Alberta social coordinator + buddy Michelle gave me the heads up about all the Jane’s Walk festivities happening last weekend.  Jane’s Walk is to help educate the public about, “walkable neighbourhoods, urban literacy, cities planned for and by people”.  The walks are usually held on the first weekend of May to celebrate Jane Jacob’s birthday.  Jane Jacobs was a writer, activist + mother who’s ideas + concepts about urban planning has influenced countless great minds of today. 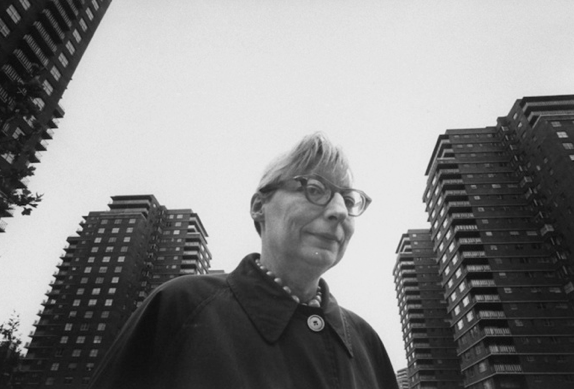 She spearheaded the campaign against a freeway that would have gone straight through Washington Square Park – changing New York as we know it today.  Her book, “The Death and Life of Great American Cities” speaks about the usability of a city, creation of high pedestrian traffic – which all leads to a vibrant community of people living together – not detached from one another.  I need to get down with this book.

Our first walk was an exploration of the neighborhood of Crescent Heights – where Jeff + I lived last summer.  I met up with Michelle + the group at St. Vladimir’s Ukrainian Orthodox Church.

I was very excited about this since one of my best friends from childhood is Ukrainian + I grew up learning about Ukrainian culture from her family.

There isn’t a very big Ukrainian community in Southern Califormia, but there are A LOT of Ukrainians in Alberta + this summer I vow to make my “Ukrainian Summer”!!! 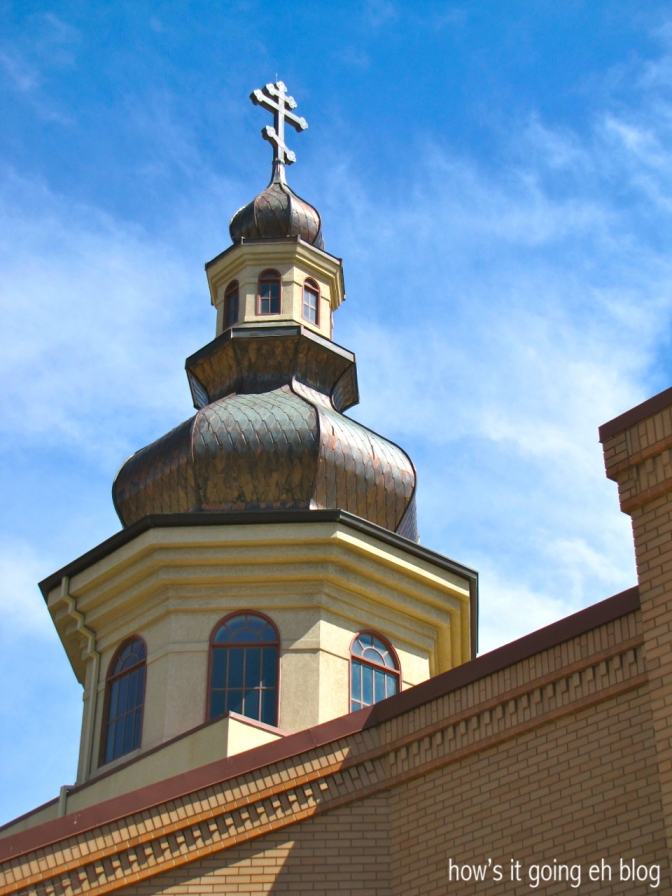 IT WAS THE MOST BEAUTIFUL DAY IN CALGARY!!!!

I think it’s amazing that you can see the Canadian Rockies in the distance from downtown! 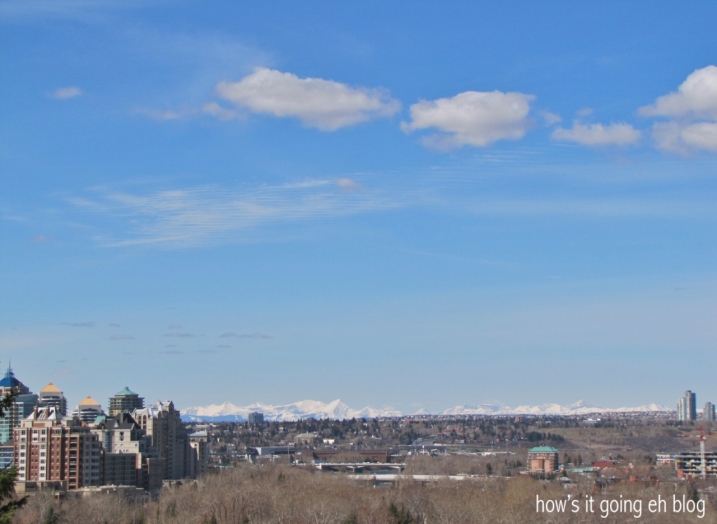 So gorgeous!  Here on the left, we have one of the older homes in the neighborhood + I found it such a contrast to all the sky scrapers in the background. 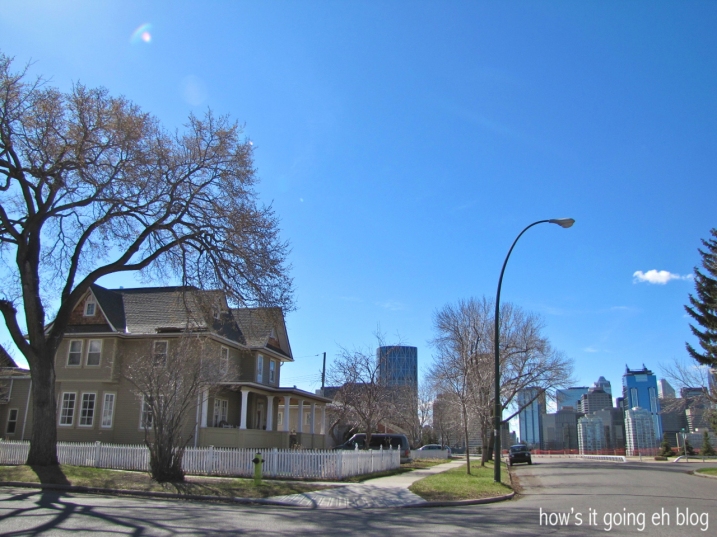 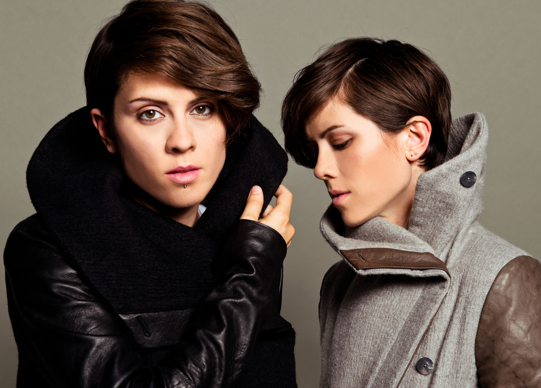 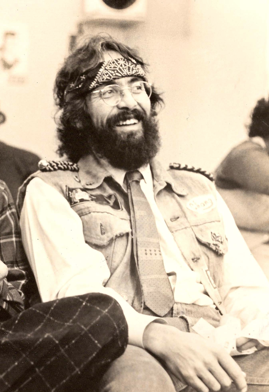 They weren’t mentioned on the tour – I did my own sleuthing!

Michelle + I noticed there were a lot of outside carpeted staircases.  Weird!  We figured better traction when it snows??? 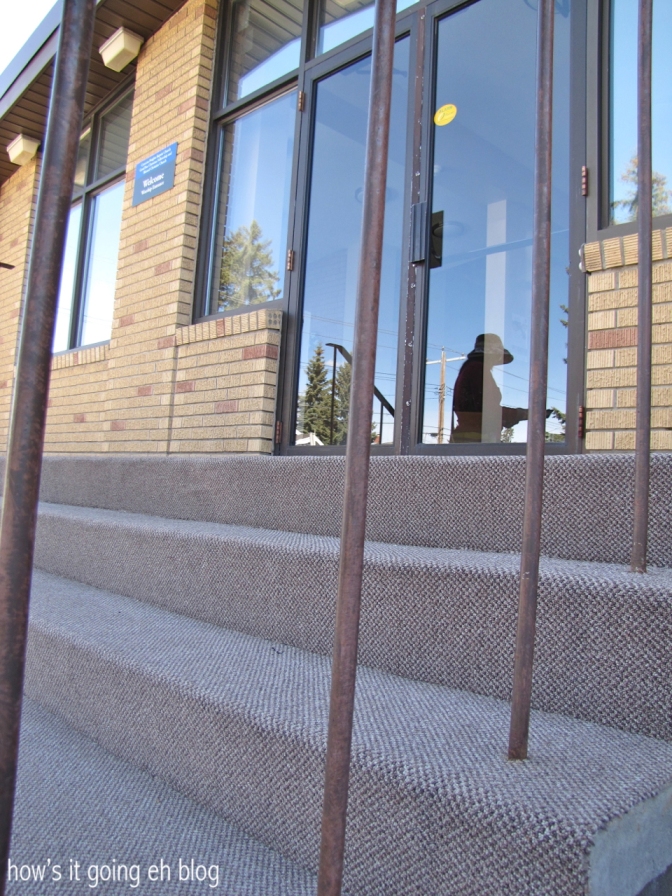 Man, it actually got HOT!!!  Here we are in front of Hughes’ House Bed + Breakfast. 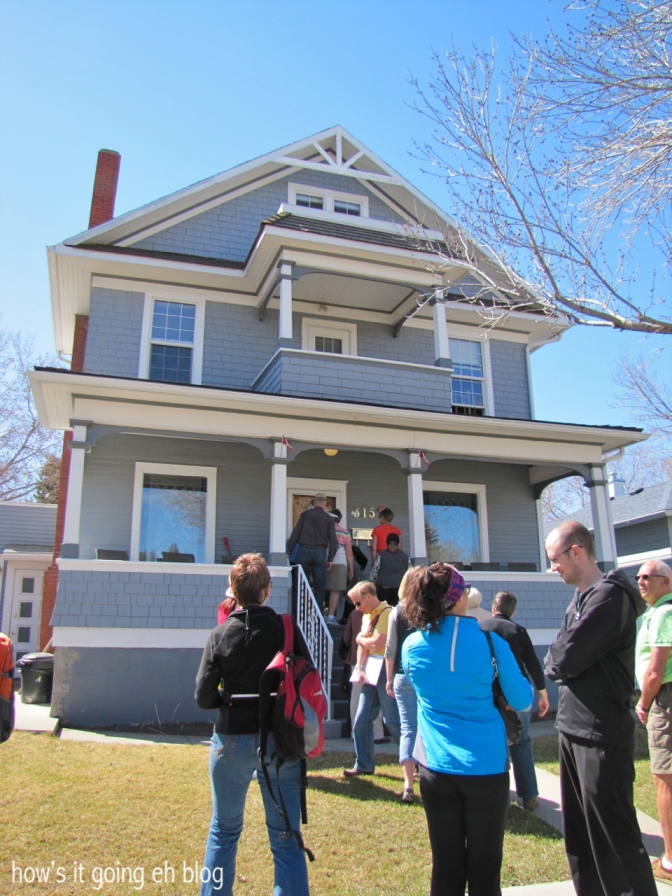 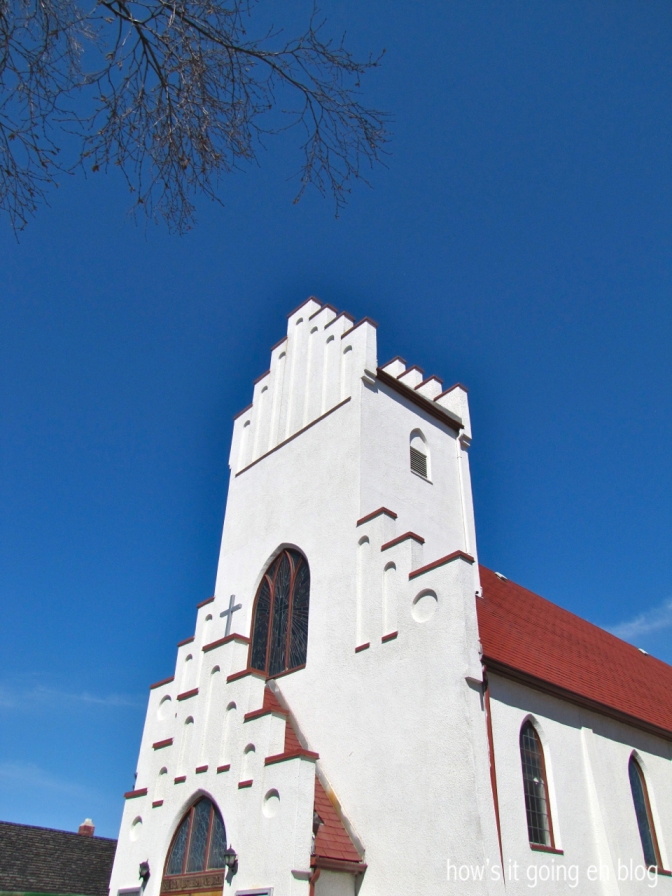 The first church owned by the Danish Evangelical Lutheran congregation, it was completed in 1931.

First tour completed, Michelle + I took a lunch break + then met up with Jeff for the next walk!  The second Jane’s walk was a COMPLETELY different experience!  Set in the neighborhood of Inglewood, it was led by Calgary city counselor Gian-Carlo Carra, who brought his toddler along for the walk!

Jeff was bossing me around + telling me to get a picture of the graffiti (there’s Michelle! And a confused Asian man!)…

And a close up of some polite Canadian graffiti discussion at the bottom right of the picture. 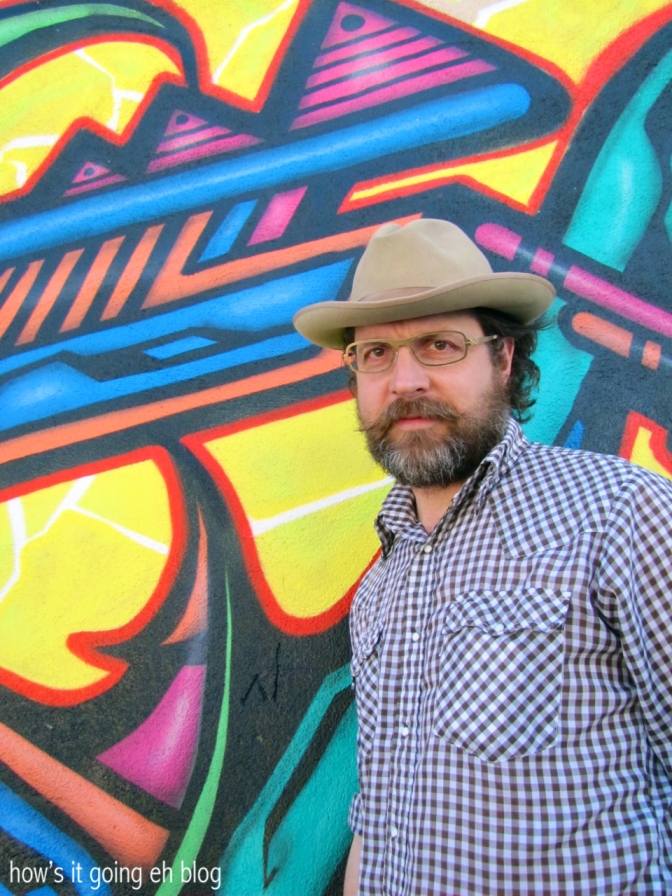 Gian-Carlo’s voice was 70% louder than the previous tour guide’s.  And he was 175% more charismatic.  His walk was more based on Jane Jacob’s philosophies + teachings, as opposed to the history of the area.  He took us to Inglewood’s art spaces + community gathering centers.

Jeff was loving Gian-Carlo with his passionate love for his community + it turned into a campaign speech of sorts.  I was hot, tired, dehydrated + burnt out!  Stick a fork in me, I’m done! Michelle went off to go see Iron Man 3.  Jeff + I walked over to his friend’s gun shop down the street.

As the armorer (person in charge of firearms on set) of Hell on Wheels, Brian has a huge collection of guns + he gave us a tour of his collection!  Here’s a couple of Russian guns in the workshop. 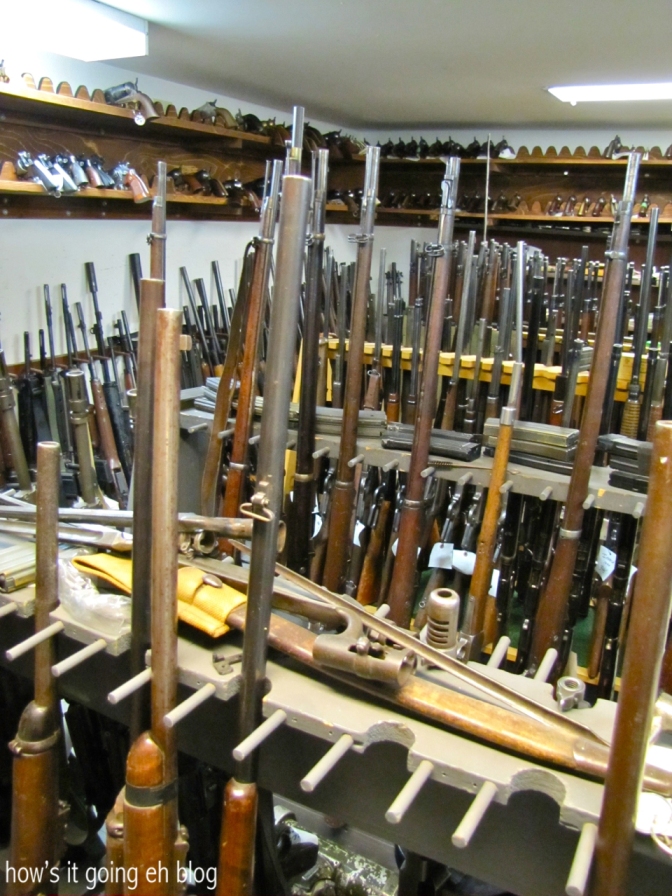 There were rows + rows of handguns! 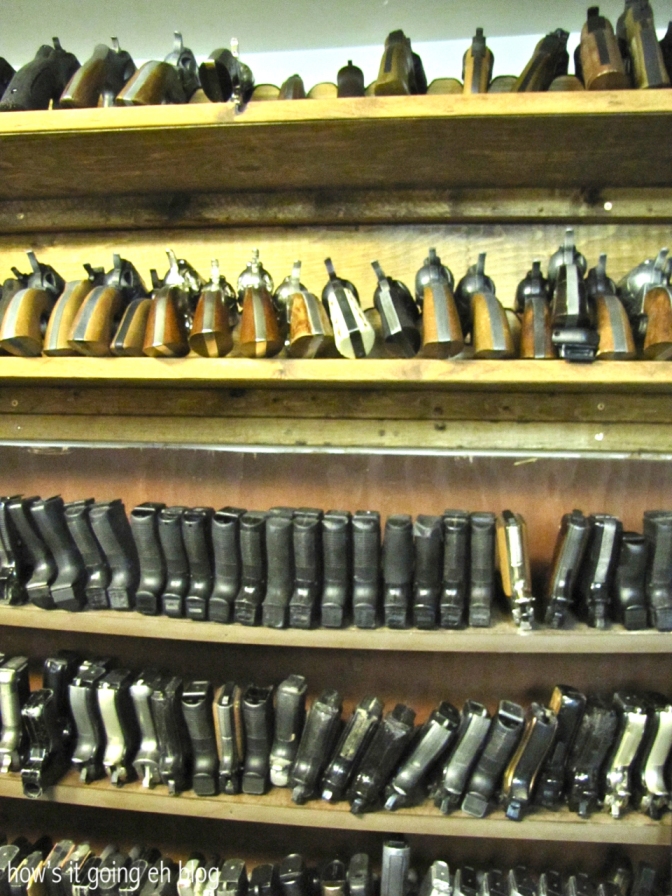 Here’s Jeff with a thompson submachine gun (tommy gun).  I told him to put on a mean face – and this was the best he could do!  Oh, Jeff. 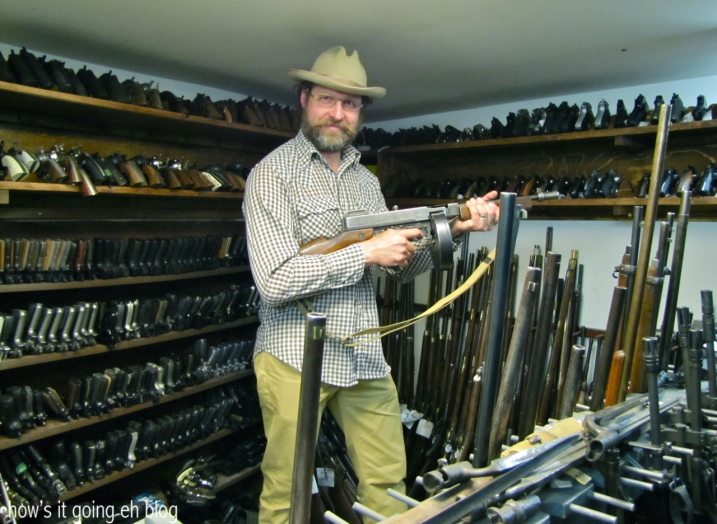 A long day, I learned so much about Jane Jacobs, historic tidbits about Calgary + walked + saw so many cool things that I would have never had known existed!  Jane’s Walk – check it out in your city!