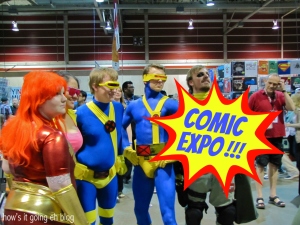 OMG I don’t even know where to start.  Best people watching.  Period.

Since 2006, the Expo has been bringing sci-fi, fantasy, anime, gaming, animation, + horror to the fair people of Calgary.  Last year ticket sales sold beyond capacity + many ticket holders waited in crazy lines, drama ensued + the fire marshal was called to assess the situation!!!

Jeff + I headed out later than I would have liked – which is our usual fashion.  My buddy Michelle recommended we drive out from Black Diamond to the first train station + then walk to the Expo.  Very, very good call!  The Expo is located at the BMO center on Stampede Park, + when I saw people in costumes, I knew we were in the right place! 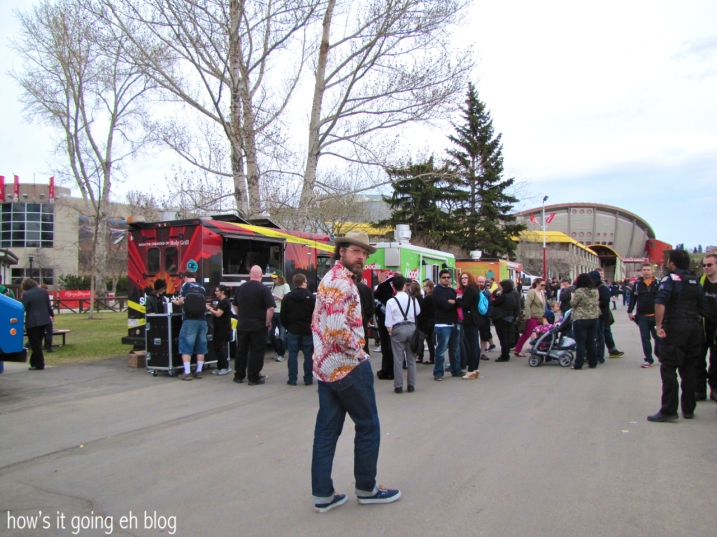 Let me tell you people, eat before you go or bring a picnic!!!  Our yakisoba noodles were $22 for two!!!  Highway robbery!!!

After a couple of texts, we hooked up with my buddy Michelle + her hubby Trevor.  She is a HUGE sci-fi fan + has attended all three days of the Expo!  Dedication!  We all had lunch together at the food court inside + it was sensory overload with all the costumed characters, noises + flashing lights!!!

After our expensive lunches, we ran into a Minion from “Despicable Me”!  I couldn’t believe somebody was actually inside that costume. 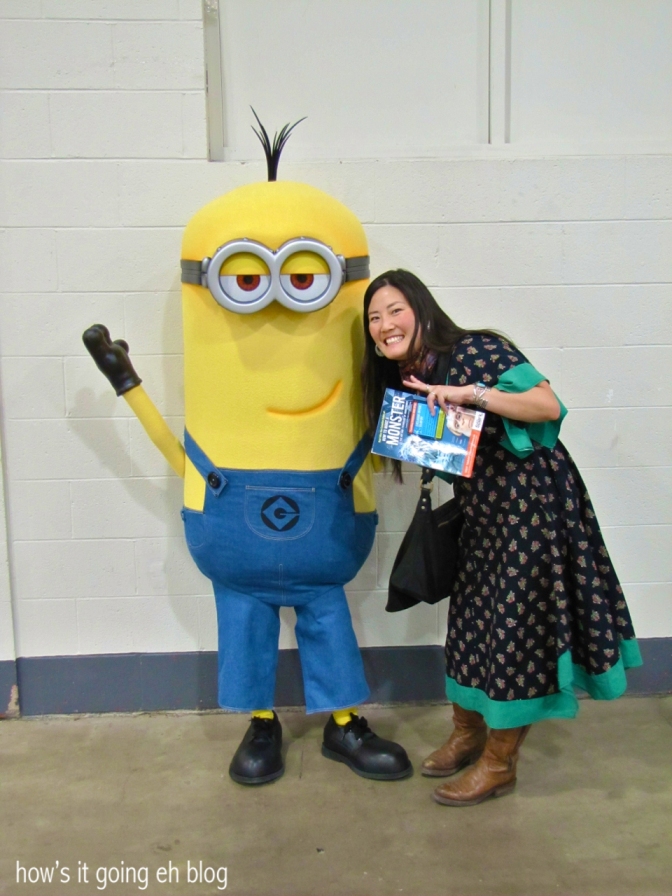 Michelle + Trevor were heading to a panel discussion + we were just getting started, so we parted ways.  Jeff took a picture of Michelle + I, as she was in her awesome steampunk costume.  But alas, it is pretty much one of the most unflattering pictures EVER + I’m way too vain to post it!!!

I really didn’t know who 3/4 of the characters people were dressed up as.  Is this Sauron from “Lord of the Rings”?

I really wanted to get lots of pictures of people in their costumes + Michelle told me, “Oh, you’ll have no problem.  All you have to do is wave a camera in front of them + they’ll instantly pose.”.  She was so right.

These people can smell a camera lens a mile away. 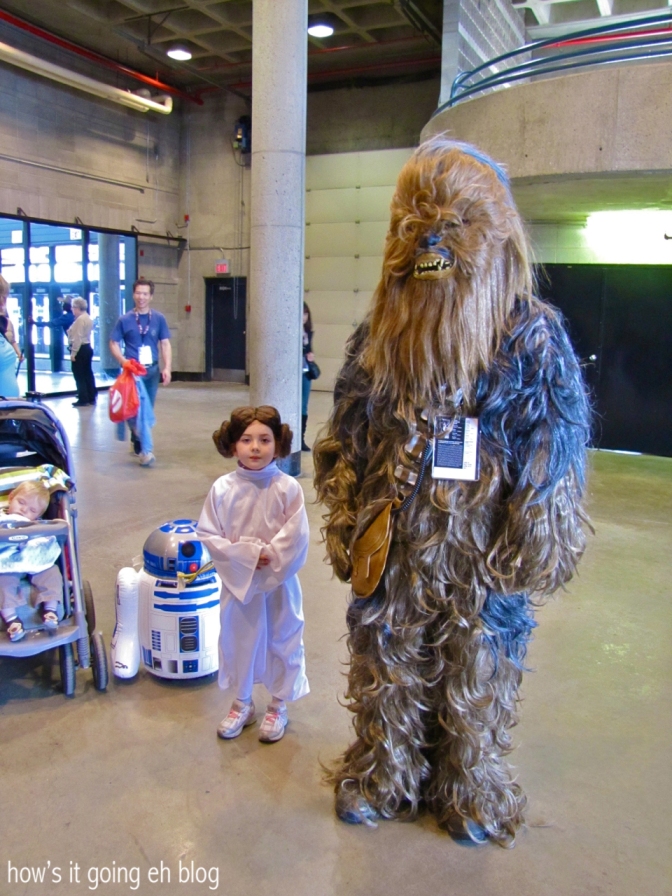 Chewbacca, his little daughter as Leia, who was dragging a C-3PO behind her.  Presh.

This kid was PSYCHED!!!

You could pay to get your picture taken in the “Back to the Future” DeLorean.  Proceeds went to the Michael J. Fox Foundation for Parkinson’s Research.  Did you know Michael J. Fox is a Canuck?  Cool, eh?

Jeff + I wandered into the area where the “media guests” were signing autographs + whatnot.  There was a huge line for Will Wheaton!!! 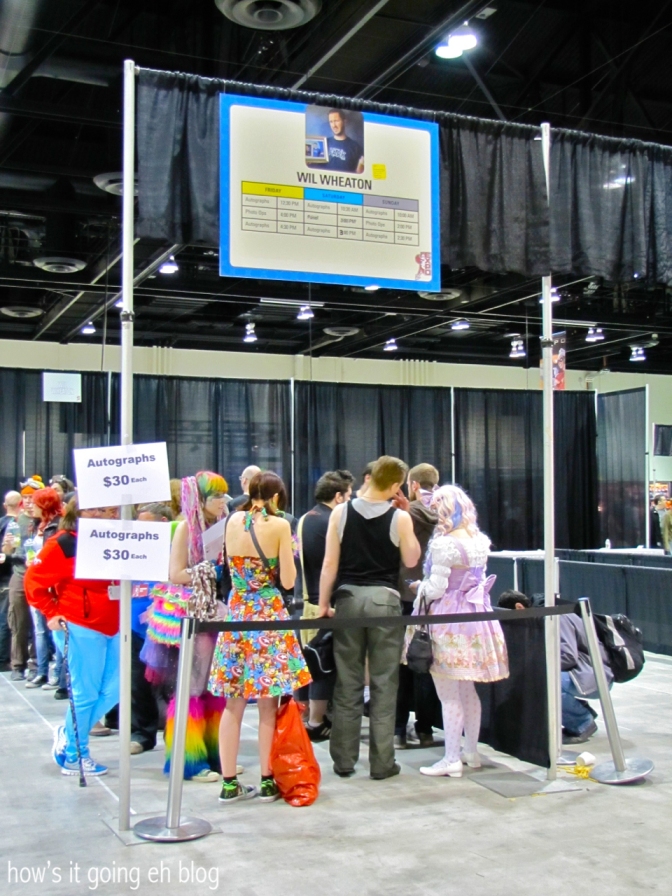 Will Wheaton is best known for portraying Wesley Crusher on the television series “Star Trek: The Next Generation”, but he’s gained new fans by playing himself on the hit sitcom, “The Big Bang Theory”.  Good on ya, Will Wheaton!

What’s funny is, after I took the picture of The Terminator, I looked over to my right + there was the T-1000!!!

Robert Patrick!  I had worked on Gangster Squad in 2011 + although I didn’t have to deal with Robert Patrick directly (I took care of the background + stunts) he always said hi on set + came to the costume trailer to chat + was a totally righteous dude!!!

R.P. was so excited to see me!  He was like, “Hey, I remember you!!!!  What the heck are you doing here?!”.  We chatted for a while, talked about his recurring role on “True Blood”, the Boozefighters Motorcycle Club  + about how he’s got the best style ever (vintage denim, bad-ass boots, you name it).  I think he was just really happy to see a familiar face from Los Angeles!

Awwwww!  We got busted by an announcement that there were “no photo-ops” or somethinglikethat.  Lame!  Robert Patrick was like, “Woohoo!!!  I got a shout out!!”.  Jeff + I reluctantly said good-bye, as there were fans waiting to meet him.  Man, the Expo was worth it just to run into Robert Patrick!!!  I loves him.  Jeff + I think he needs to be on “Hell on Wheels”!!!  Email AMC + get on it, HOW fans!!!

Peter Dinklage from “Game of Thrones” was there too!!!  Except….we missed him.  Wa-wa-waaaaa!!!  Sad trombone! 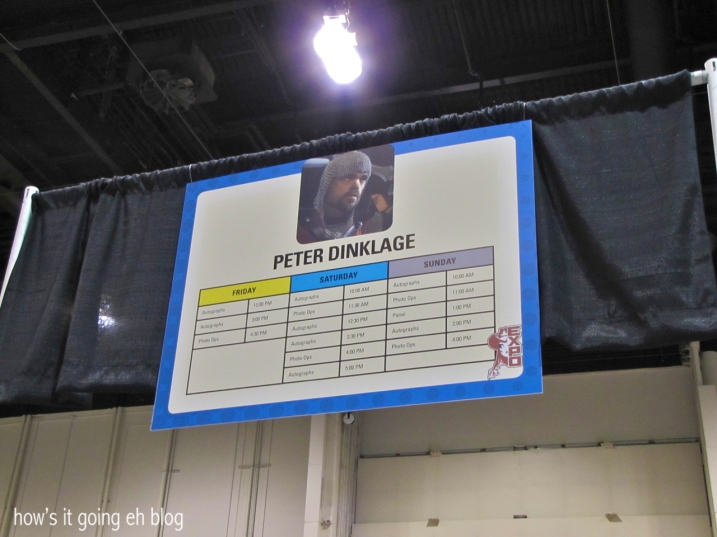 The Weta booth was awesome!!!  They are the amazing conceptual design, weapons, armour & chainmaille, specialist props, vehicles, specialty costumes, models & miniatures, special makeup & prosthetics, public art & displays company based in New Zealand, famous for their work on “Lord of the Rings” + many other films.

Gollum is looking at Jeff in disbelief that he’s never seen any of the Ring movies.  Yeah, I know – it kills me too!

Another one of my favorites, No-Face from the amazing + wonderful Hayao Miyazaki’s “Spirited Away”. 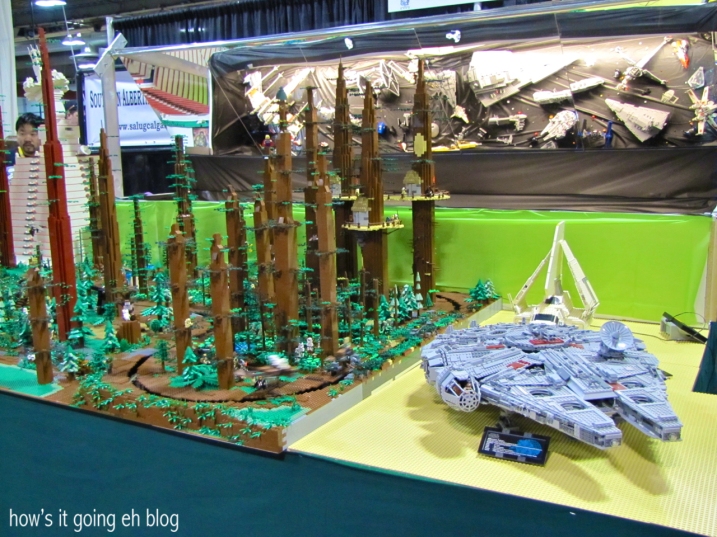 Fabulous Michael, who is having a grand opening of his museum, Trekcetera this June in Vulcan, Alberta!  I’m so there!!!  Yes, there’s a town called Vulcan + Michelle + I are going to Spock Days.  I swear. 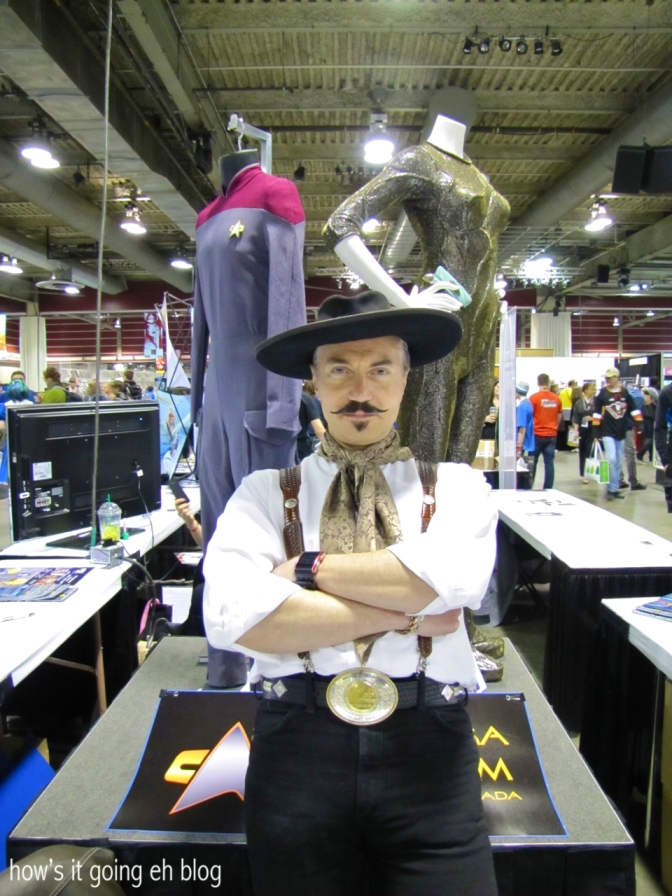 We discussed costumes + film + when I asked him to tell me the story behind the costume he was wearing he replied, “This isn’t a costume, I often dress like this.”.  Woops!

There was so much merchandise for sale!  I couldn’t look at any of it after a while! 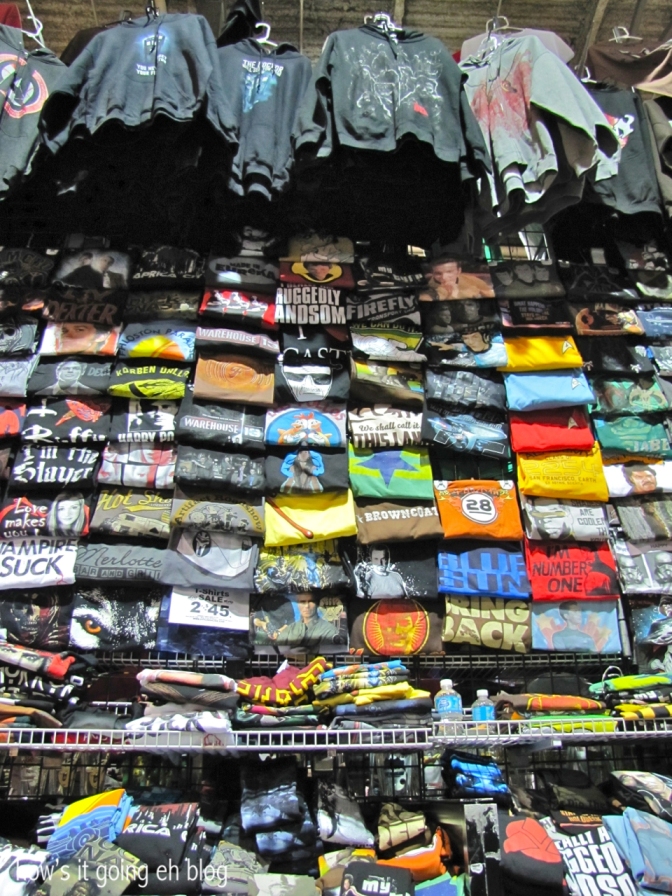 This big guy was trying on some chain mail + needed some major assistance to get it off!

These people were very seriously discussing the merits of a proper shield.  I love eavesdropping.  It’s pretty much the best thing ever. 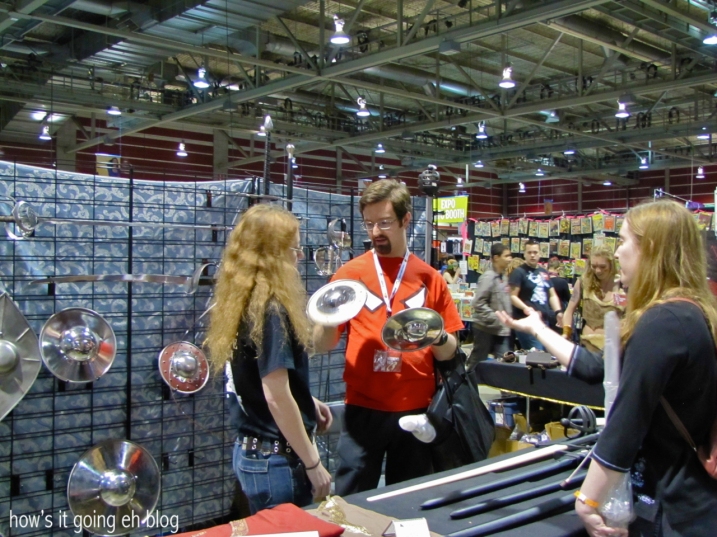 I forget which characters these gals were.  I just kept randomly stopping people + enthusiastically saying, “Omigod!!!  I LOVE your costume!!!”.

It took these guys almost five months to make their costumes.  They were explaining to me what they planned for next year + it was like they were speaking another language.

Finally!  Something I recognize!  Minecraft!  This is for my nephews!

There were some Vikings playing some Viking stick game outside.  I didn’t ask this roguishly dashing Viking to pose for me, but my camera must have caught him at the perfect moment!

Back to the train station to return home.  The station platform was filled with characters!

Across the tracks, a bagpipe player was fittingly playing the “Star Wars” theme as we all waited for the train…

Whoosh!!!!  A long post!!!  I hadn’t been to a comic convention since I was in high school, when my girlfriends + I would drive down to San Diego for the Comic Con.  This was before the film industry + video games took over!  It was interesting to come back to it.  There were a handful of comic book artists, but they were mostly sadly ignored.  Attendees were at the Expo for the consumerism + for “the stars”.  My friends + I went for the graphic novel artists like the Hernandez Brothers of “Love + Rockets” or David Lapham of “Stray Bullets” or for Dan Clowes of “Eightball”.  Boy, has the comic world changed!!!  One thing I was happy about was the high female attendance!!!  Back in the day, there was a predominant male presence in the comic world, so I was really pleased with all the girl power!

All in all a fun afternoon + the highlight of the day was….ROBERT PATRICK!!!!!!  Thanks to Michelle for keeping me in the know about the Expo + thanks for reading!!!!!