Hey everyone I’m back.  The loss of the internet due to the flooding + our following camping trip = a lapse in blog posts.

The flooding in Southern Alberta has been a really surreal experience.  Jeff + I were extremely lucky in Black Diamond, since our condo is up on higher ground.  So many thousands have had their lives turned upside down.

It all started on Wednesday night on June 19th.  It’s bizarre because as I was writing a blog post that night, the winds + rains were raging outside as I typed.  “My god, is this storm normal for Alberta?!” I thought to myself.  I was scared – as a Los Angeles native unaccustomed to weather, the torrential downpour outside was really freaking me out!  And no, it was definitely not the norm in Alberta.

The next day as I drove into the next town (Okotoks) a radio siren warning interrupted a happy country song.  I’ve never heard a siren warning on the radio before, so you can imagine how alarming it was!  The message declared a state of emergency + notified residents of a sour gas leak in our neighboring Turner Valley.  “Stay inside!!!!” the radio warned!!!

Devastation was ripping apart the communities of Southern Alberta as the flooding waters were unstoppable.  Jeff had gone to work that morning + the ministry ordered that production stop + all cast + crew evacuated.  Jeff had the hindsight to fill up the bathtub with water + ordered me to buy lots of bottled water.  Lo + behold, that afternoon a mandatory water restriction was placed, which is still in effect as of today.

Oh yeah, + our power was out, but we were lucky, it was only for one day.  What was there to do with only two candles + one flashlight?  SLEEP!!!  Jeff + Megu were exhausted.

The next day we checked out the damage in our little town of Black Diamond.  Streets were muddy + blocked off. 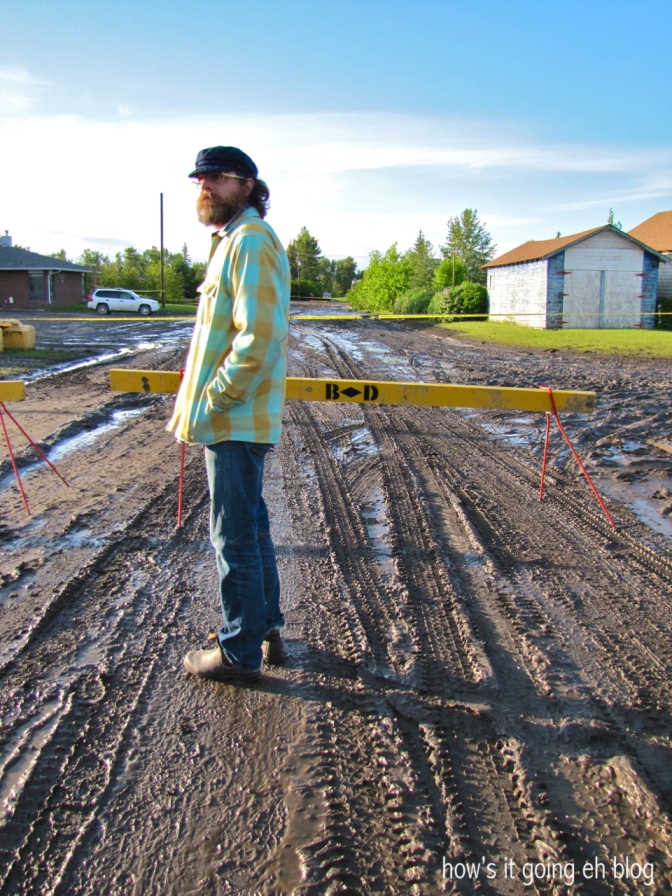 The city trenched out the road at the bridge leading to Turner Valley to divert the water from causing more damage.  The bridge is still out + we haven’t been to Turner Valley since the flooding.  The asphalt at the gas station near the bridge was buckled from the strength of the river’s currents. 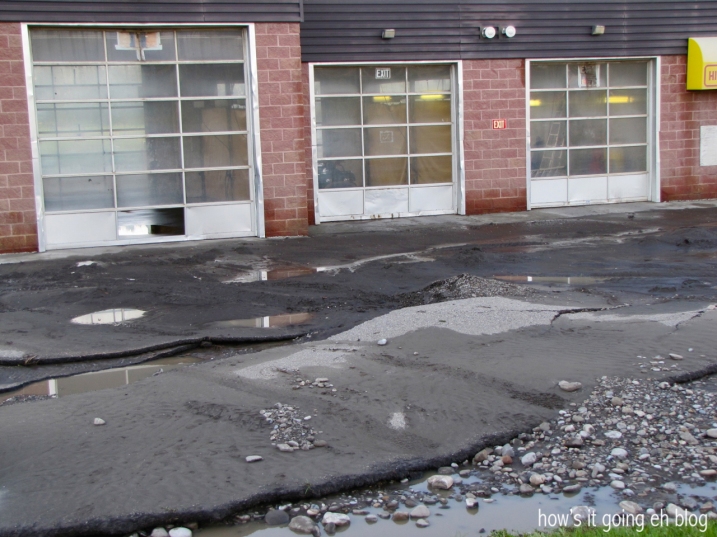 The local grocery store + many other businesses were shut down.  Sand bags were everywhere.  It was like a ghost town.

We traveled up a little closer towards the other bridge leading to Turner Valley.  Alberta Energy Regulator was monitoring for sour gas leaks before they were called off to a different part of town that was reporting a sour smell.

The bridge had been completely wiped out.  The Sheep River was raging + as we stood above watching, chunks of the road were eroding into the hungry river.

The Canadian Armed Forces have been deployed in hard hit areas to aid in evacuations + assisting RCMP.  Here I caught some of them in Okotoks.

If you haven’t seen any footage of the Southern Alberta flooding, here is a video:

And you must click on this link to check out a good collection of photos from the National Post of the flooding – especially because of the pictures of Kevan Yeats who’s truck was sinking in the water – his cat Momo was in the truck + Kevan is desperately swimming to save Momo. There’s also photos of Kevan giving Momo lots of love, all fluffy, dry + happy.

Jeff + I were very, very fortunate throughout this whole terrible turn of events.  Mudslides, sewage + agricultural runoff, unbelievable damage to homes that are irreversible.  It’s so heartbreaking.  It’s going to take a long time for Southern Alberta to recover.