From Los Angeles to Vancouver – my friends threw me a baby shower!!!  In a box!!!!

Earlier in my pregnancy my good friend Cacey in Los Angeles asked me if I had a baby registry.  “Noooo…” I sheepishly answered.  The majority of my friends + family are in the states – being apart from everyone I didn’t take it upon myself to start one.  “Well, you should make one because people are going to want to get you things.” she replied.

Jeff dropped me off at the library in Tsawwassen near the border.  Due to immigration I’m not allowed to cross the border.  Trapped.  In.  Canada.  After Jeff had picked up the packages, he came into the library to get me + said, “Holy sh*t, your friends in Los Angeles must really love you!”.  “Yes they do!” I jokingly boasted.  But when he showed me the backseat of his car filled with gifts I went:

From costumers that I’ve known for years working in Los Angeles!  Hours are so long in the film industry, we all grow very close + are almost like little urban families!  There was a note in a manila envelope explaining that it was my baby shower in a box… 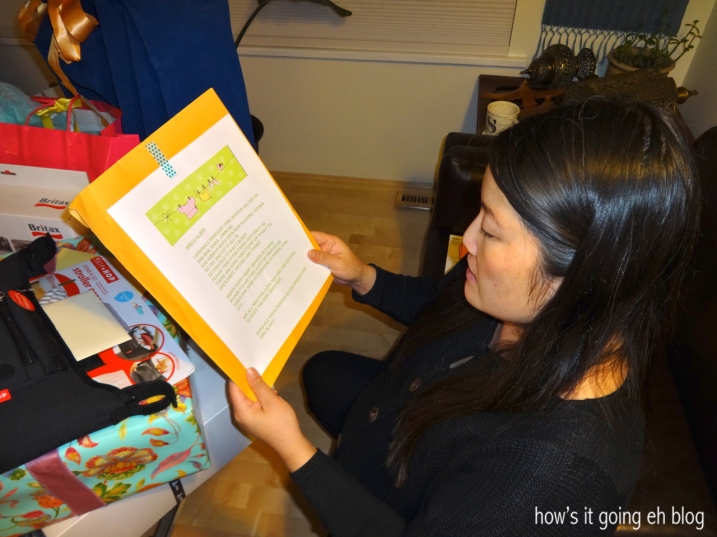 There were 3 boxes that had notes on which to open first.

Huh?  A disco ball!!!  So confused!  I thought, “Maybe they think the lights are good for the baby?  I think it’ll give the baby epilepsy?”.  There are multiple settings, colors + motions – we turned it on + instant club!!!

The second present was a CD with lovingly selected party dance tunes!  And the third, a guess-who game book filled with baby pictures of everyone who participated!!!

MY FRIENDS ARE SO CLEVER!!!!  It really set the atmosphere for baby shower party time!!! 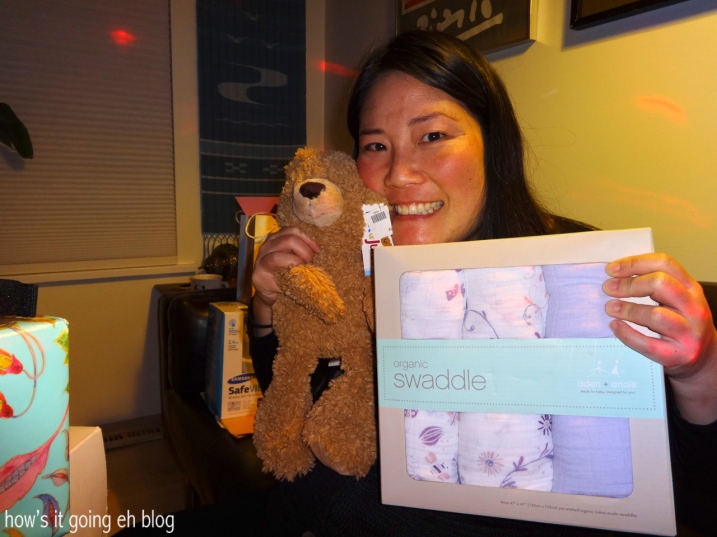 I received so much cute, chic + useful schwag!!!!

So overwhelmed by the amount of gifts!  Look at my face! 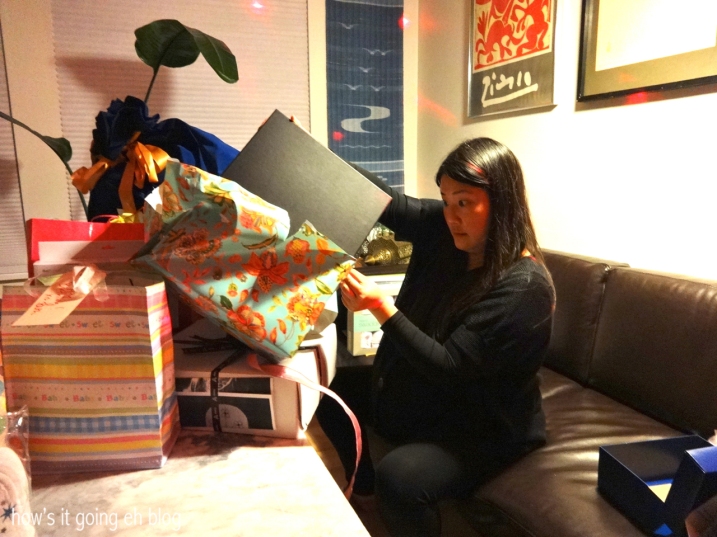 So much happiness.  One friend wrote in his card, “Although I’m not physically there, in spirit I am sitting across from you right now.”.  I cried a little when I read that!

Megumi was spazzing from all the excitement. 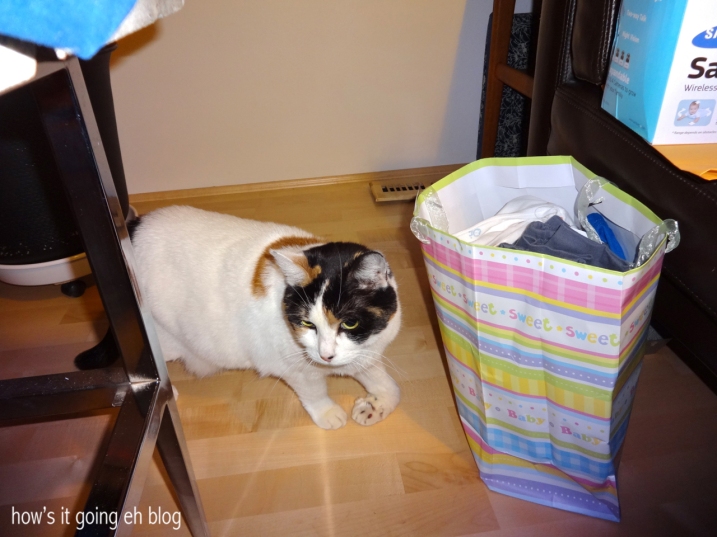 LOOK AT THIS Y’ALL!!!!  My good friend Amber HAND KNIT ME A BABY HUDSON’S BAY BLANKET for the baby Canadian Bacon!!!! 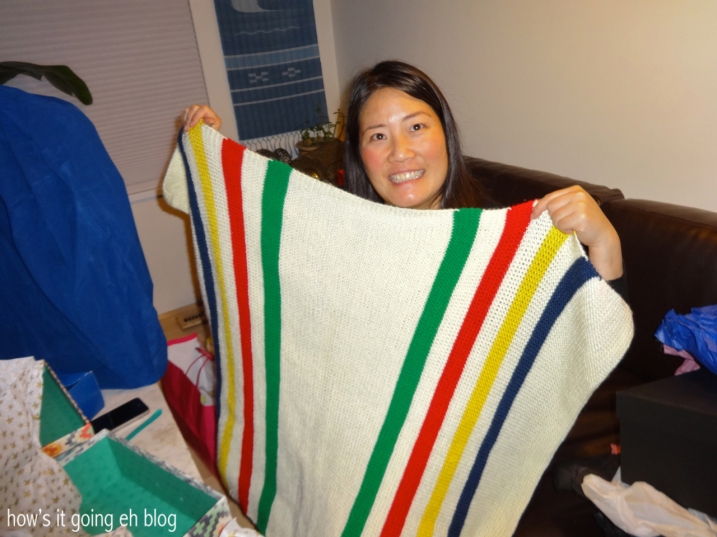 All the presents were so creatively wrapped + everyone knows me so well. 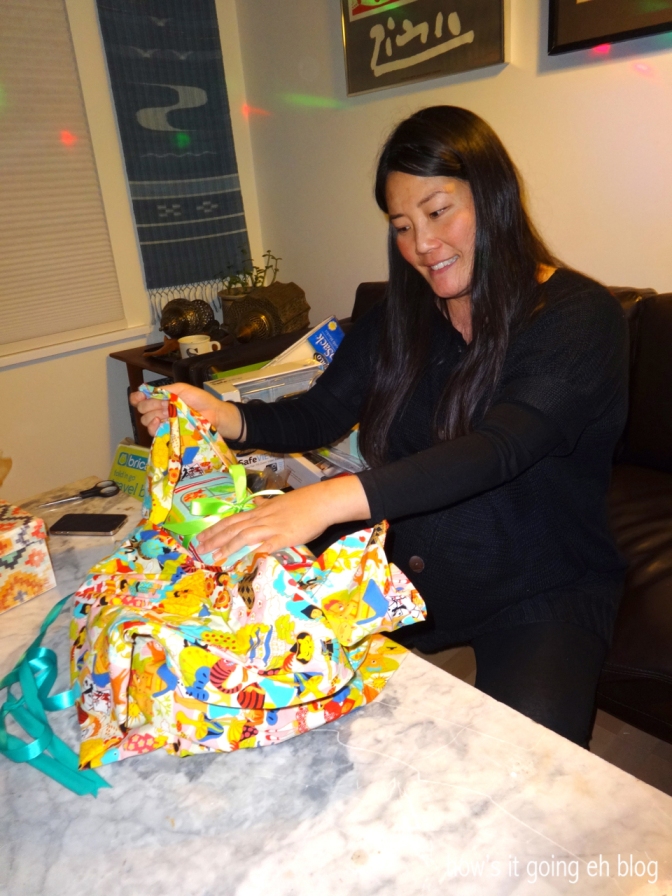 A handmade sushi blanket!!!  Too much cute.  The baby is so set now.  I’ve been collecting weird, random things at thrift store – now the baby will be chic + not look like a patchwork hobo!  There were so many more amazing goodies, but there’s too many pictures to share! 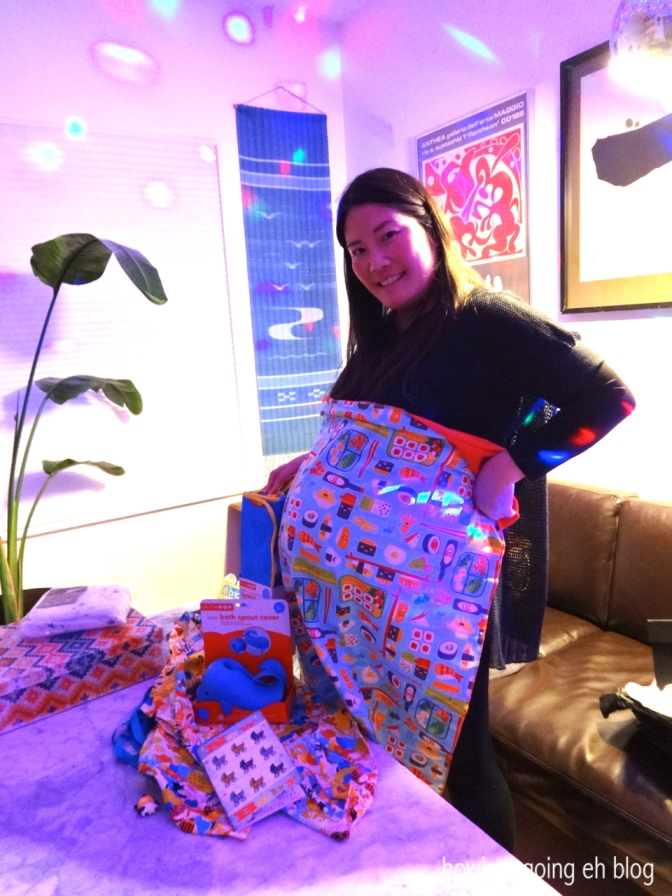 I was super tickled with this card.  Everyone is waiting for me to make a beaded cradleboard for my papoose.  BTW, check out my bloated, pregnant sausage hands!  The past 2 weeks I’ve been swelling up!  Sexy!

Woosh!!!  Thank you thank you thank you to Cacey for coordinating everything + to all my wonderful, creative + thoughtful friends!  It was the most fun baby shower ever!  Jeff + I feel so loved!!!  I’m still so surprised + shocked at all the work, care + planning that went on to make me feel so special!  You guys mean the world to me!!!  I love + miss everyone so much!!!

My heart is filled with fluffy baby koalas + stardust!!!  Tears!  THANK YOU!!!!