Indeed, my friends – there are more Stampede antics to cover!  Giddyup, let’s go!!!

Stampede is Alberta’s biggest yearly event!  Folks come from all over the globe to attend + some locals get out of town to get away from all the congestion!  The rodeo has been taking place since 1912, created + promoted by Guy Weadick a cowboy + vaudeville performer.  And they really put on a show – it’s the biggest rodeo on earth!

After walking around the Stampede grounds the day before, we were happy to be seated for the rodeo. 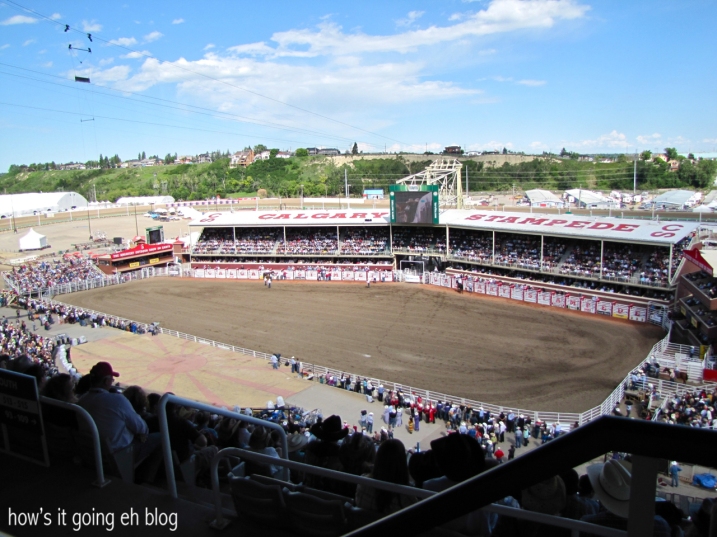 Even if our seats were in the nose bleed section!  I bought our tickets almost 3 months prior to Stampede – buy your rodeo/chuck wagon tickets well in advance if you want better seats!  I don’t mind nose bleed, since you’re out of the sun or the rain!

A line up of cowboys: 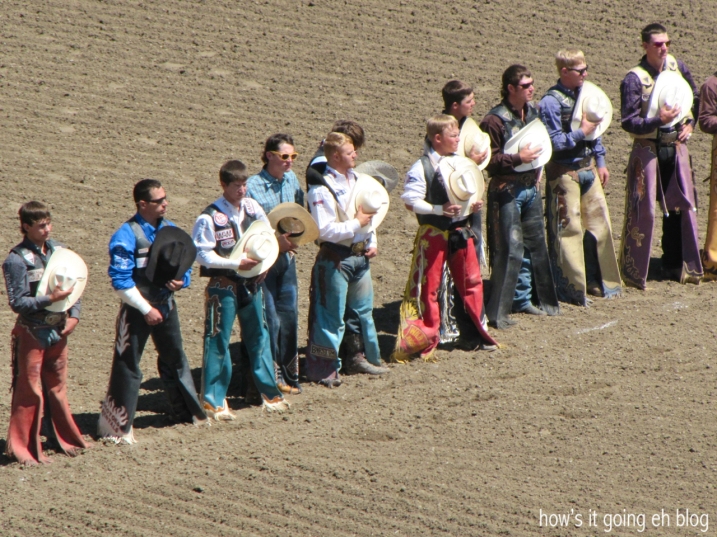 And cowgirls!  Don’t mess with them!  They look tougher than the guys! 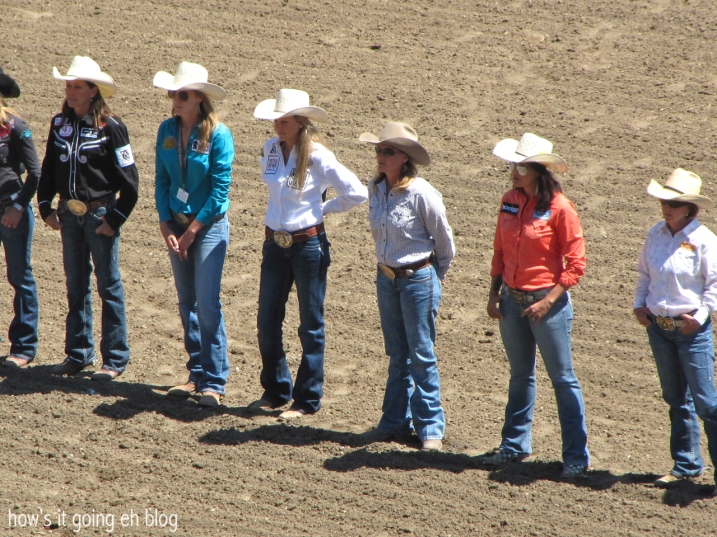 Let the show begin!  I love the bucking broncs because the riders always make the best faces as they’re hanging on to the angry beasts.  Arrrrggghhh!!!

I don’t know how photographers capture the elegant, masculine side of bronc riding because my pictures make the cowboys look like red faced little scrunchy tomatoes. 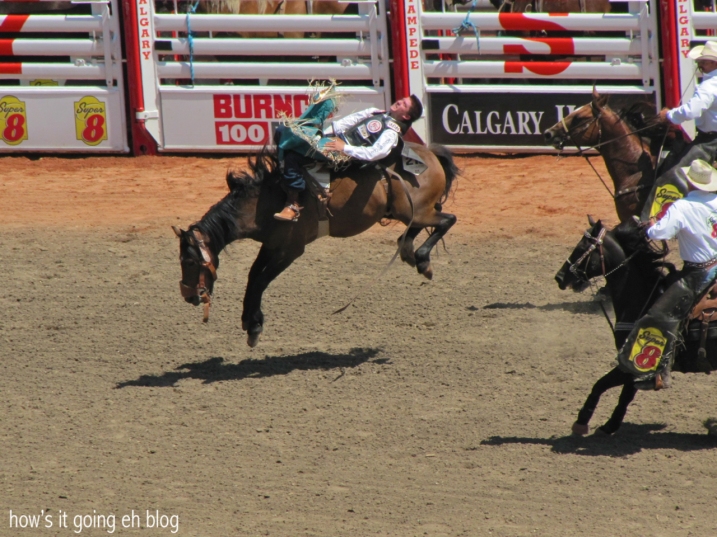 FIST PUNCH!!!  Right on, my man!!  The fist punch is the official greeting/sign-of- approval/show of happiness in the Nishino household.  Nice job, bro! 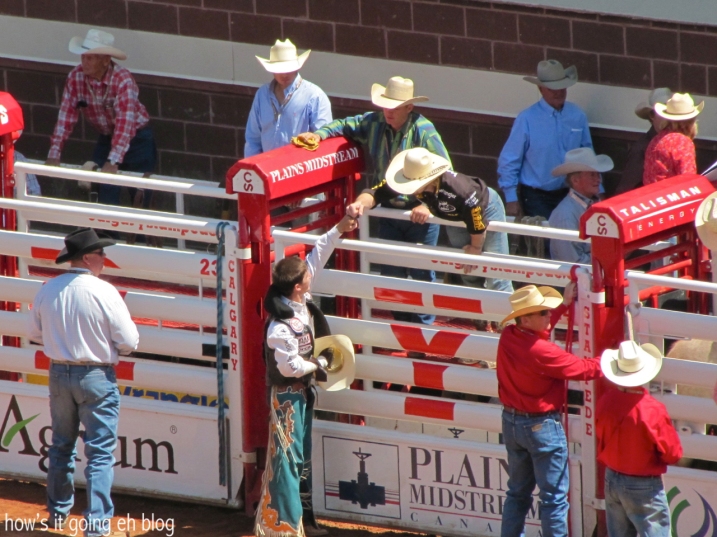 Some cowboys were thrown of their horses as is to be expected: 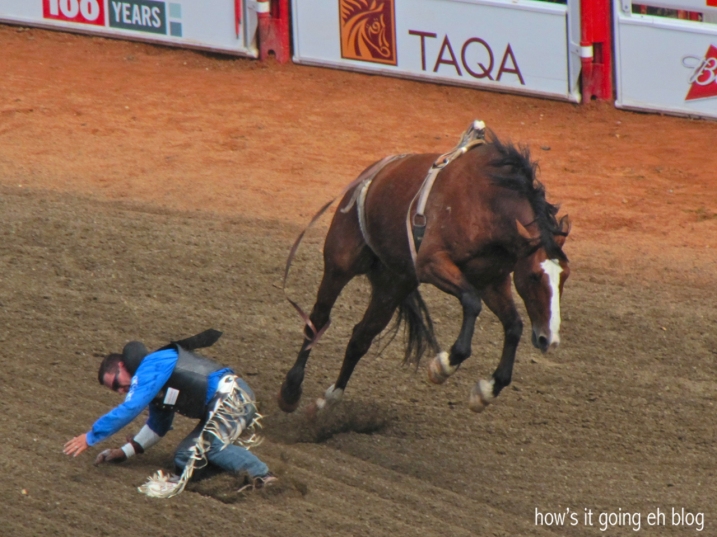 A couple were thrown off + would land on their feet!!!!  DAYUM!!!  That is straight up gangsta!!!

This cowboy seemed to have landed on his face!  OUCH!!!

An unscathed, jovial cowboy waving to his fans. 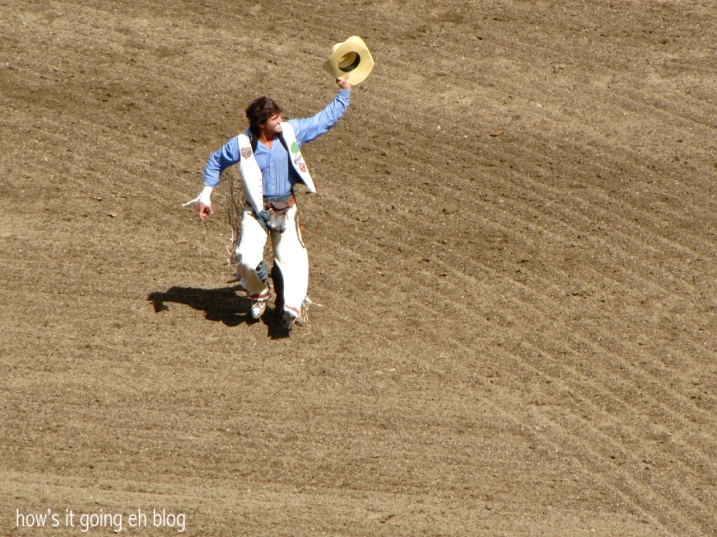 It actually did start raining a little + the wind really kicked up, but nothing like last year’s mud fest.  Again, the nose bleed section saved us from the elements.

Stampede’s rodeo clown keeps the momentum up + let me tell you he has some seriously sweet dance moves!  Here he is doing Michael Jackson “Billie Jean” + I’m not kidding, he’s really good! 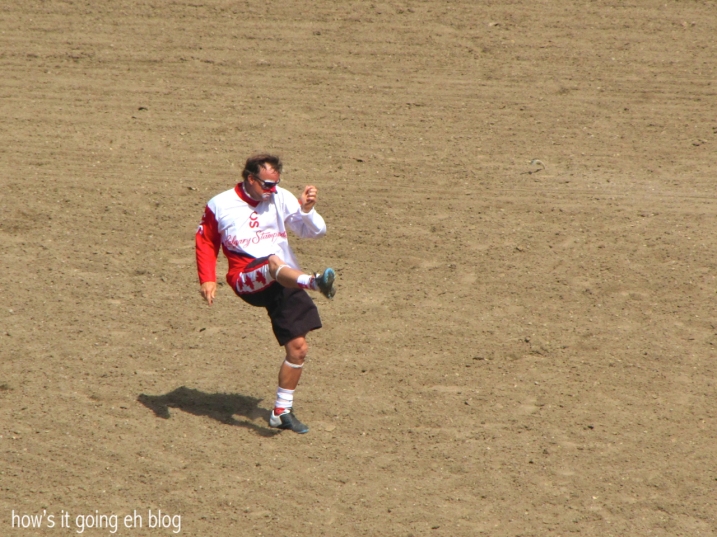 Women’s barrel racing is always one of my favorites at the rodeo.  I love how they come charging out of the gates!

So much skill + control!

One of my dreams is to one day be able to gallop on a horse!

Bull riding is always really intense because those animals are gargantuan + could cause some serious damage!  The massive bulls are ready to go right when the gate opens! 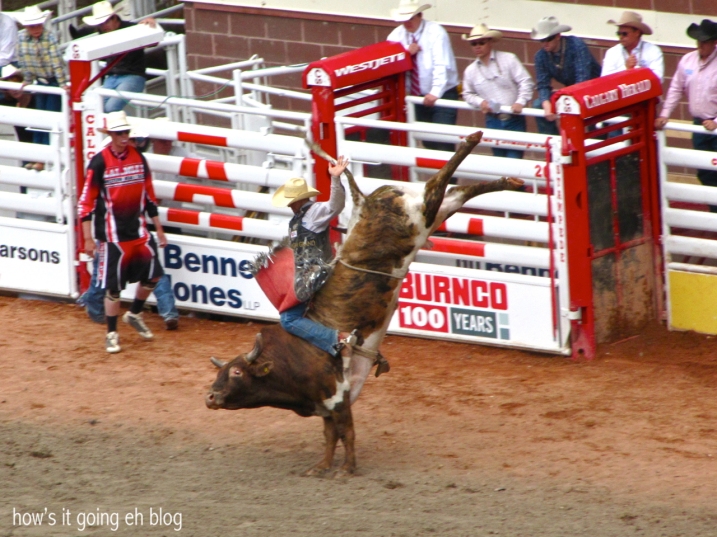 It’s amazing to me that these hulking behemoths can move their bodies as if weightless!  Airborne!  All hooves off the ground!!

This bull is still pissed off as all hell!!!!  I would be too!  The guys in red + black are there to divert the bull’s anger away from the rider + to help usher the bull back into the backstage pens.  What’s cool about the Stampede is that because it’s such an international/touristy event, announcers explain what roles are played + other details so that even city gal Debbie understood what was going on.

Whenever the winner of a category was announced, the Stampede Indian Princess, Queen + Princesses stood on stage.

By the end of the rodeo when all of the contestants come on stage, most of the crowd are trying to leave the Grandstand.  RUDE!!!!  I stay till the very end!  Respect!

Debbie wanted me to point out that all of the winners in each category were American.  Not one Canadian victor.  Ouch!  Congratulations American cowboys/cowgirl, an amazing rodeo!!!

A view of the bustling Midway from the Grandstand.

Jeff + I in front of the Grandstand.

Had to take a ride on the Ferris Wheel!!!

Food was uneventful on Sunday since we didn’t want to wait in crazy long lines.  We didn’t even manage to get a bag of Stampede’s famous mini donuts!

But yes, I took a picture of them being freshly made, just to torture you guys.

We droopily dragged ourselves over to the heavy horse pull arena.  Debbie is so city, she had never seen a draft horse in real life.  She kept exclaiming, “They’re like dinosaurs!!!  DINOSAURS!!!!”.  Okay okay, pipe down, city mouse!  Take ‘er easy!

They are majestic to be sure + my favorite horse – because I love to pet their huge, velvety schnozzles!!!! 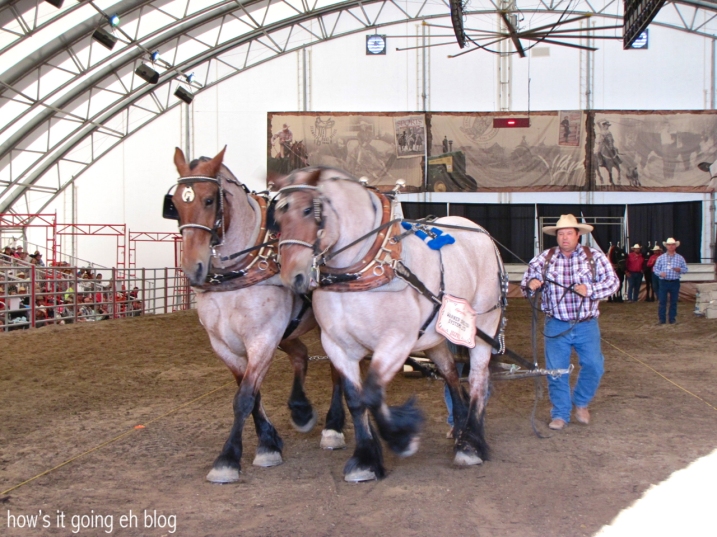 Oh ho, who do we have here?!  An appearance from Mr. Anson Mount from Jeff’s show “Hell on Wheels”!  The crowd was very, very excited as Anson chatted with the announcer about shooting season 3.

You know who wasn’t excited?  The big dude in the blue shirt.  He was like, “ME WANT SEE MORE BIG HORSES PULL HEAVY STUFF!!!!”.

Okay, fun’s over.  We hauled our what seemed like lead filled bodies onto the train to head home.  Here’s Debbie reading up on how all horse breeds are derived from Arabians + Jeff doing his best impression of the living dead.

The Calgary Stampede is definitely an overload of all the senses + two full days of it kind of put me over the edge!!!  But so much fun + you’ll never find anything that compares!

Keep on reading as Debbie + I make our way to the blue hued lakes + crisp mountain tops of the Canadian Rockies!!!