One of the Circles of Hell: A Baby’s Cold

Dante’s Inferno forgot that one of the circles of hell is a baby with a cold.  A hell that will drive you climbing up the walls with madness…

Damn that Halloween party.  DAAAAAAAMN THAT HALLOWEEN PARTYYYYYY!!!!!  Langdon became sick after the mommy-baby Halloween party that Langdon I went to.  Missed our Halloween?  Click here!  So many drooly babies sharing toys + slapping each other with their moist, wet, meaty hands!!!!  GERM FEST!  Here’s Langdon after the party, still wearing his monkey hat looking very self satisfied that he had won a prize for his costume at the party.  Chubby cheeks was torturing his stuffed monkey contentedly.

And then…..unbeknownst to his mother…the virus was working it’s devilry on the baby.  Here is photographic proof of the downhill slope as he wears one of the prizes from his gift bag – Yo Gabba Gabba hat.  So not happy.

The next day we went to the New Brighton Park.  The cold still hadn’t reared it’s ugly head yet.  It was a bitingly chilly day, which I’m sure didn’t help the situation.  Dad + baby swinging merrily.

On the beach with a view of Seconds Narrow Bridge, one of the bridges that leads to North Vancouver.  Baby is looking Grumpy Pants.

We brought yumyum yummy sushi for a picnic feast. 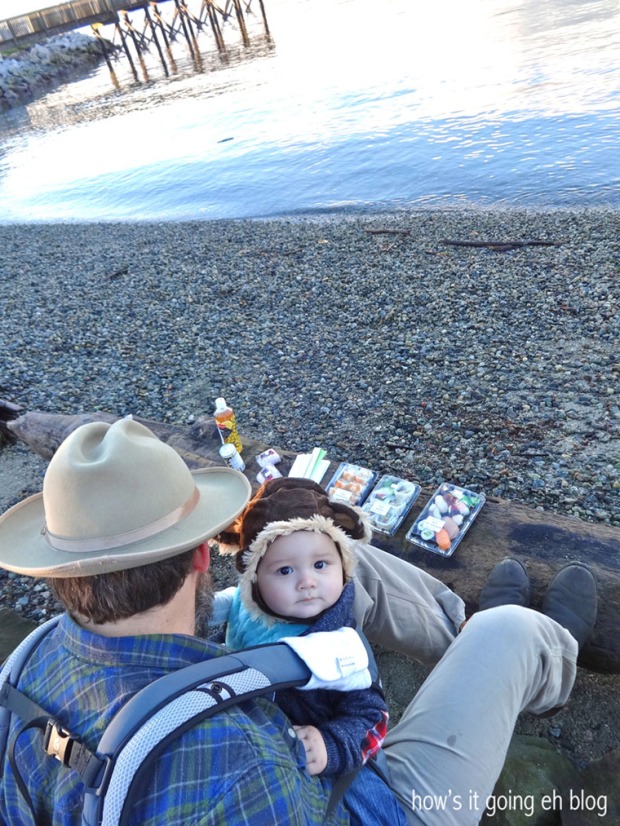 Oh thank god back at home on his new play mat by Skip Hop!!!  No bright, ugly plat mats for us!  I couldn’t bear to stare at something I didn’t like all day. 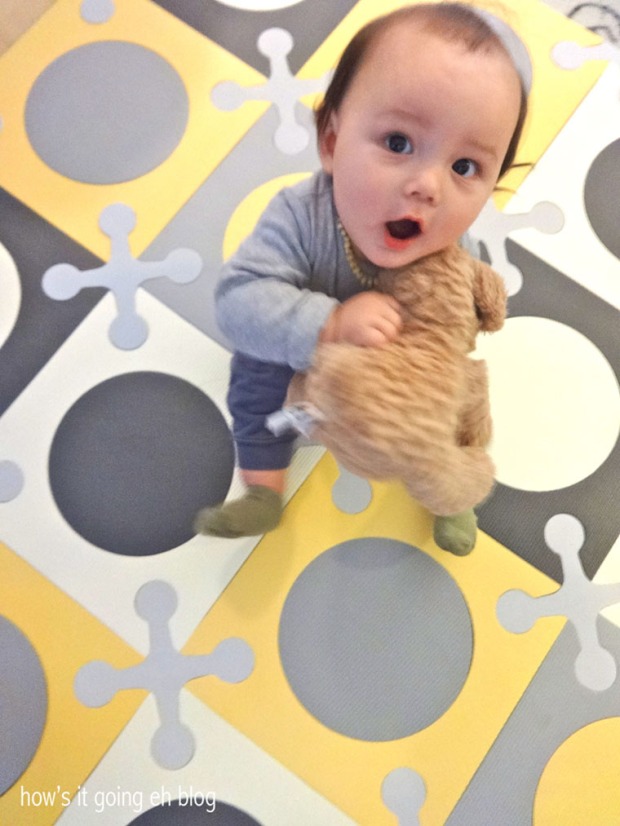 On Monday the gale of Langdon’s cold had hit full force.  Snotty, stuffed up nose, a loud dry hacking cough, crying + screaming allll week.  Sigh.  The only outing we did was a short trip to Ikea to meet up with his gf Madison who ALSO GOT SICK FROM THE DAMN HALLOWEEN PARTY!!!!!

Madison has the same exact symptoms as Langdon.  Thus, her mom + I concluded that it was THAT DAMN HALLOWEEN PARTY!  I am going to quarantine Langdon until he can learn to blow his own nose!!!  Yes, that’s right folks!  Mom has to suck the snot out of baby’s nose while the writhe + shriek bloody murder!  Fun!  NOT!

At least he hasn’t lost much of his appetite!  A series of shots from lunchtime.  In this one Langdon’s saying, “WHAT?!  COME AT ME, BRO!!!!”. 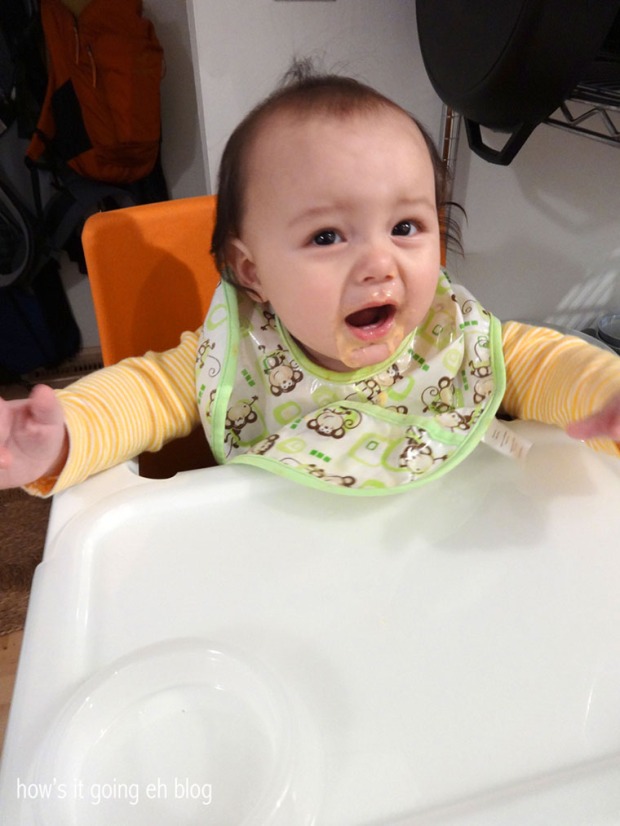 With lack of sleep + general crankiness everything has been a fight + struggle.  Don’t get me started on diaper changes.  You don’t want to know.  He has been screeching + grabbing at his food bowl, so I gave up + let him have at it. Poured that sucker all over the table.  “Screw it” I said.

It’s been so intense + unrelenting that I’ve been doing Facetime with my family as much as possible to entertain + make him smile.  I stepped away for a second + let grandma babysit!  By god, I’m going to have to do this more often!  I kid! 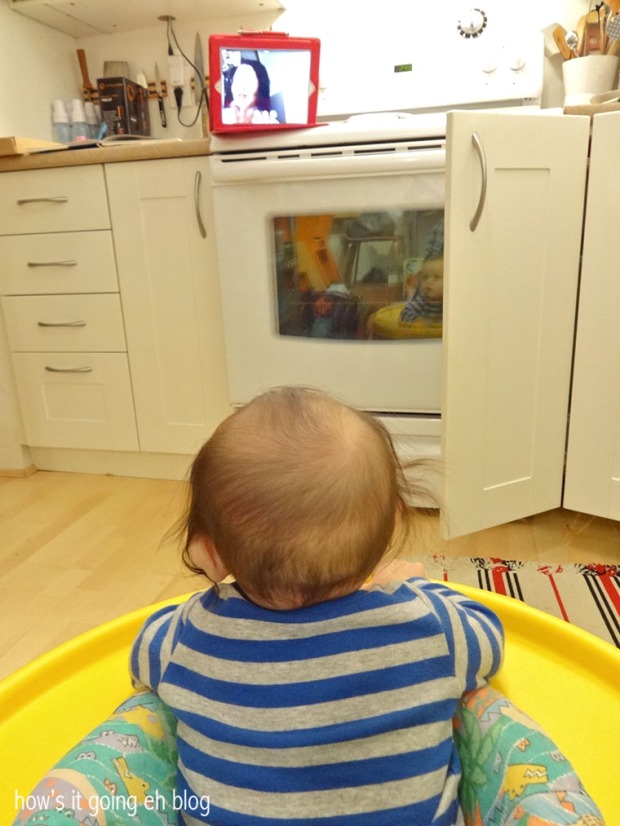 Langdon’s been sleeping so little that when he eats he acts like a drunk + bops his forehead into his spoon of food.

What have I been doing to combat the stress?  Aggressively chopping large amounts of vegetables for Langdon’s food while he’s asleep.  No wonder I’m burnt out.

And guess what?  After all that – I ordered a pizza.

But we have managed to have some fun.  I was cutting some fabric to make him pants + tied a strip onto Langdon’s noggin.  Ralph Macchio!  Karate Kid!

I captured this picture of him taking it off.

BWAHAHAHAH!!!!  He looks like a cross between my dad + a drunk Jack Nicholson!!!!

My friend sent me this Instagram pic of a baby in a fashion turban. 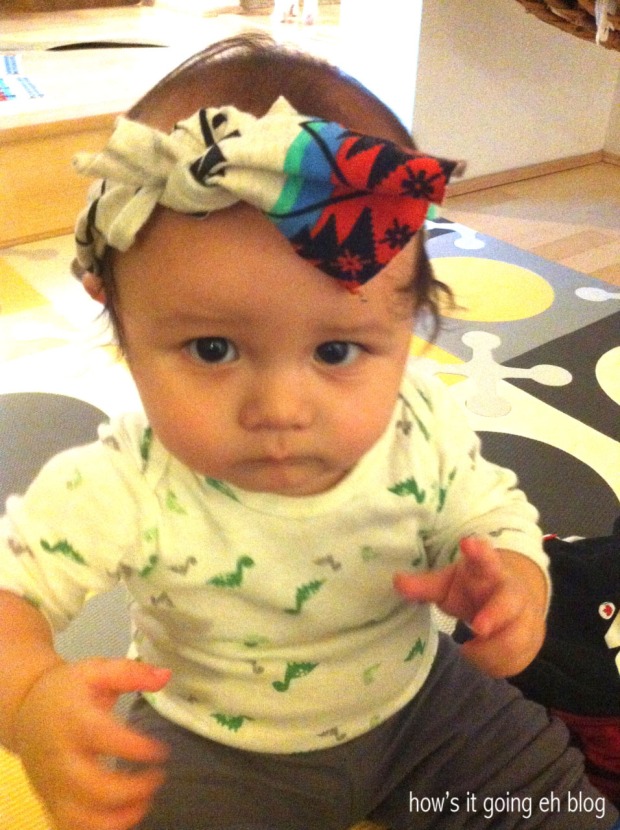 Meanwhile, during all of this misery, Langdon has turned 7 months old!!!

There were some smiling photos I got while Jeff was pretty much standing on his head trying to get Langdon to smile.  But I chose this one because it sums up how it’s been going lately.  It’s been a week + he’s STILL SICK.  Ok done complaining!  I know there are much worse + difficult situations that I could be experiencing with a baby, but I had to vent!  I’m so glad it’s the weekend + I get some help from Jeff!  Hope everyone out there is taking lots of Vitamin C + feeling well!!!