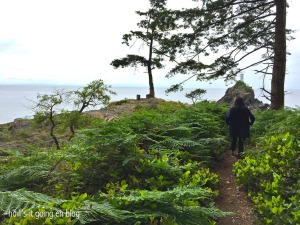 Bowen Island is only a 20 minute ferry ride from North Vancouver!  A perfectly easy way to fit in some island life!

Jeff, Langdon + I just returned from a trip to idyllic surf town, Tofino on Vancouver Island.  But seriously I’ve got way too many photos to edit.  So this week let’s read about Bowen Island!  It’s ISLAND TIME, mon!!!  (Cue the irie reggae beats) C’mon + join me on my righteous summer journeys!!!!

Last month my girl Debbie came to visit me from NY.  I wanted to take her away from the concrete jungle in her mind + transport her into the lush greenery of the Pacific Northwest.  We didn’t have time to visit Olympic National Park, so a hop, skip + a jump on the Horseshoe Bay ferry to Bowen Island.

Immediately upon arrival, we went straight to the visitor center + grabbed a map.  We wandered clueless, turning the map in our hands like it was on a pinwheel.  A kind local adopted us + enthusiastically asked, “Have you been to the causeway???!!!!”.  She claimed people have moved to Bowen Island after seeing “the causeway”.  What the heck is a causeway?  We were dying to know. 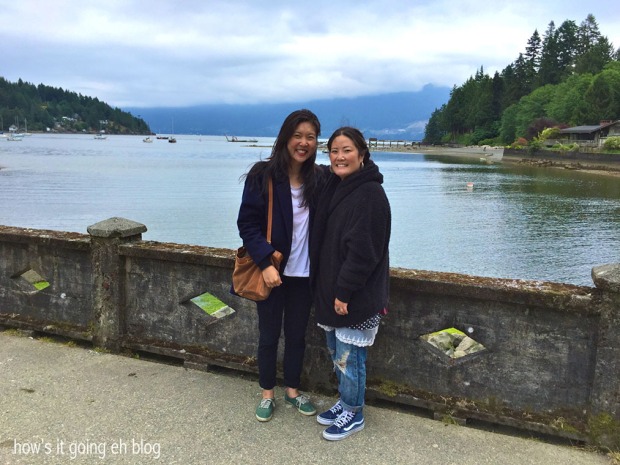 Here we are standing on the beautiful bridge that was built in the late 1800’s according to our kind local friend.  I look like Kung Fu Panda. My crazy furry sweater/daytime robe does not photograph well, but it’s cozy as hell.

One side of the bridge is fresh water that flows into the ocean on the other. 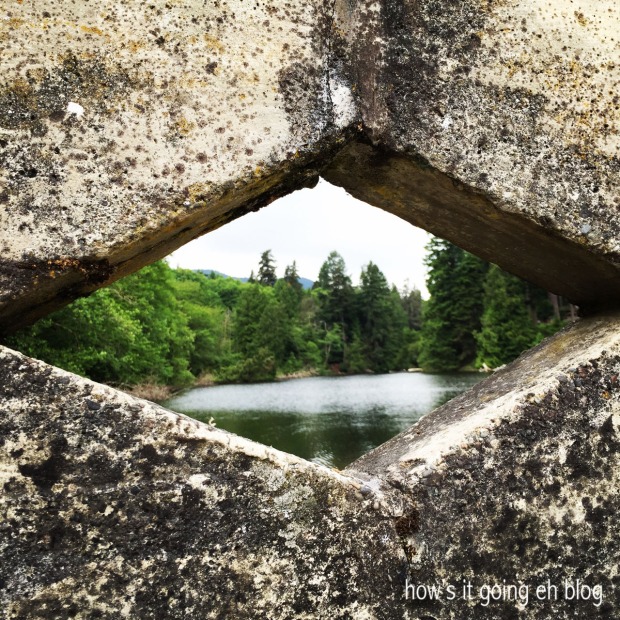 This picture of Debbie on the bridge makes her look very sassy. 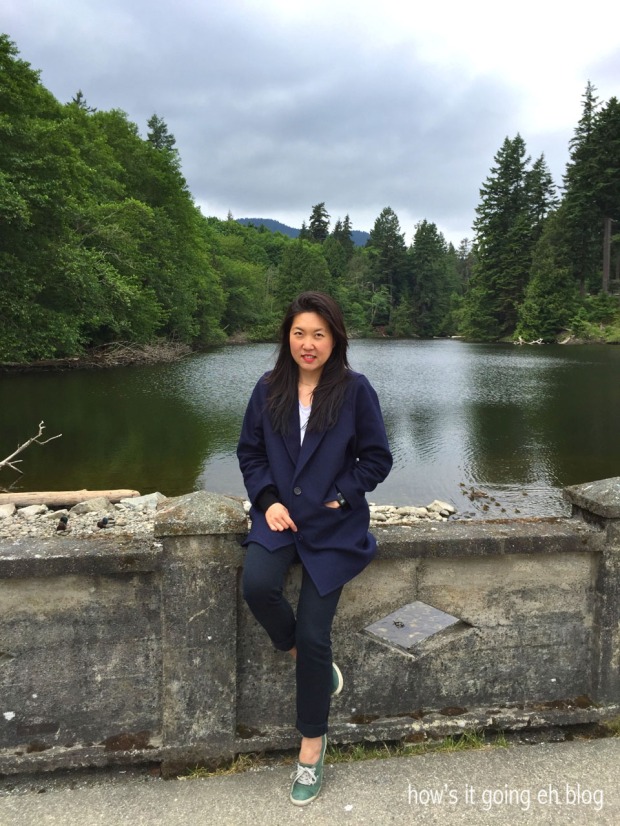 We ooed + aaaahed + chatted + admired the beauty of the causeway when all of the sudden we stopped + were like, “What are we doing?!  We have to get out of the causeway!”.  It was just as the local said – we could have stayed there forever.  We never would have left Snug Harbor!  It was kind of weird – like a Twilight Zone episode.  Like the causeway stopped time + once we got out everyone we knew was old + time had passed.  Rip Van Winkle style.

Salmon Berry picking season starts in late May.  I spotted some + commanded my much taller friend to git in there + reach for some berries! 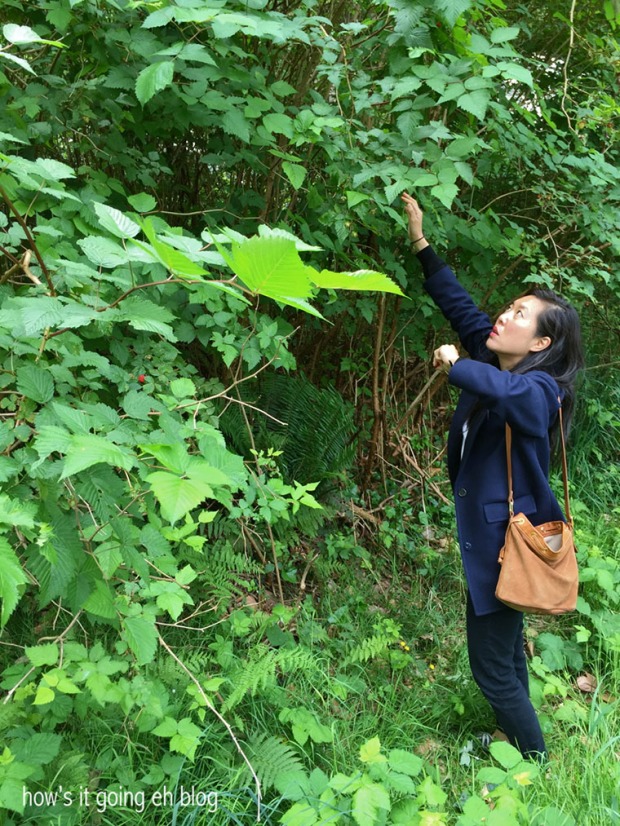 If you don’t know what Salmon berries look like, here they are: 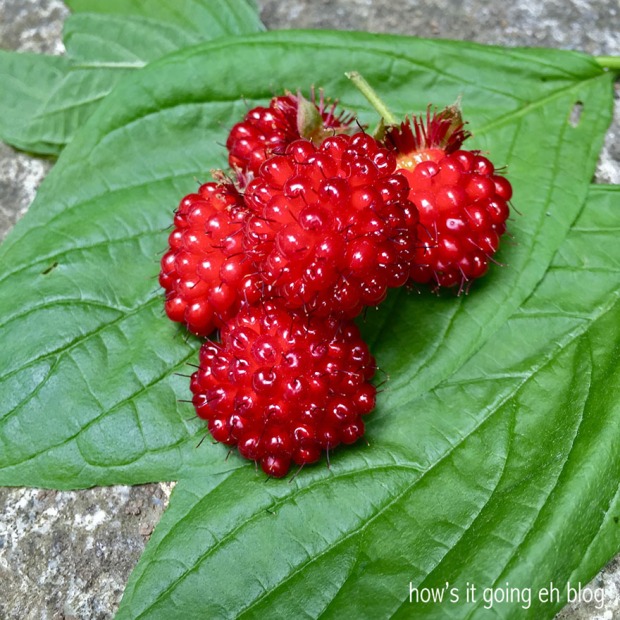 Some say their name comes from the fact that they have a resemblance to salmon roe.  Juicy.

We headed tout suite to Cape Roger Curtis Lighthouse. The pleasant informative lady at the visitor center said it is one of the “wildest” beaches on Bowen Island.  It is only a 15 minute drive from Snug Cove Harbor. 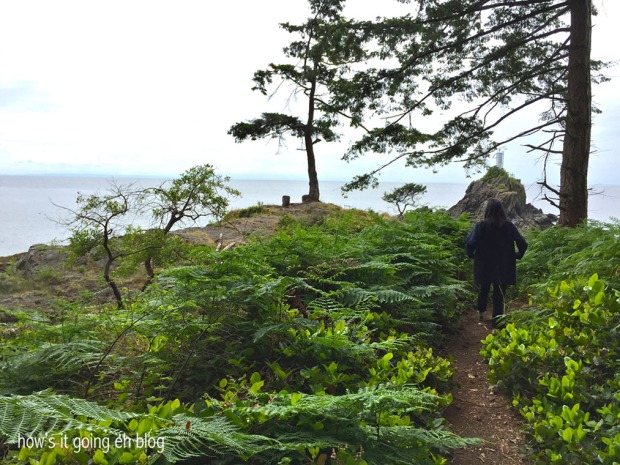 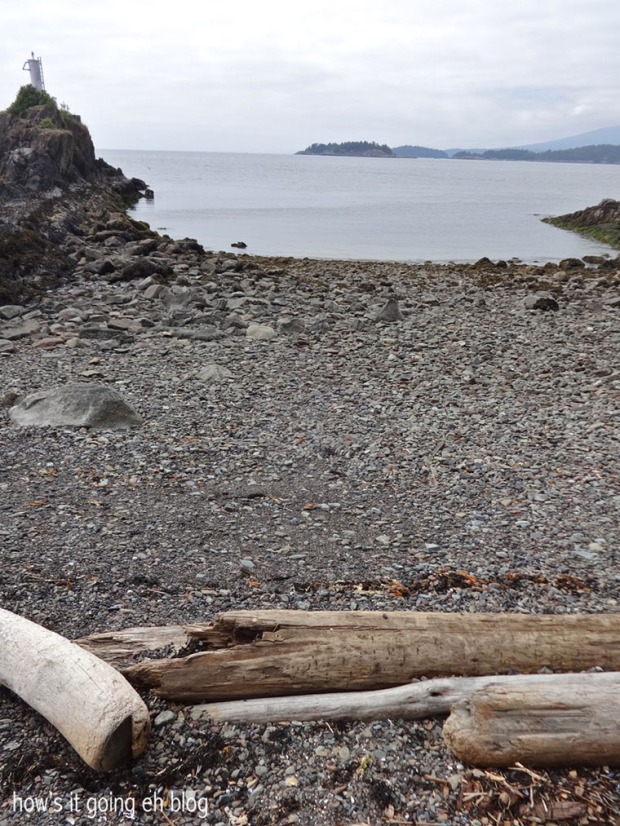 I can’t get enough of the driftwood. 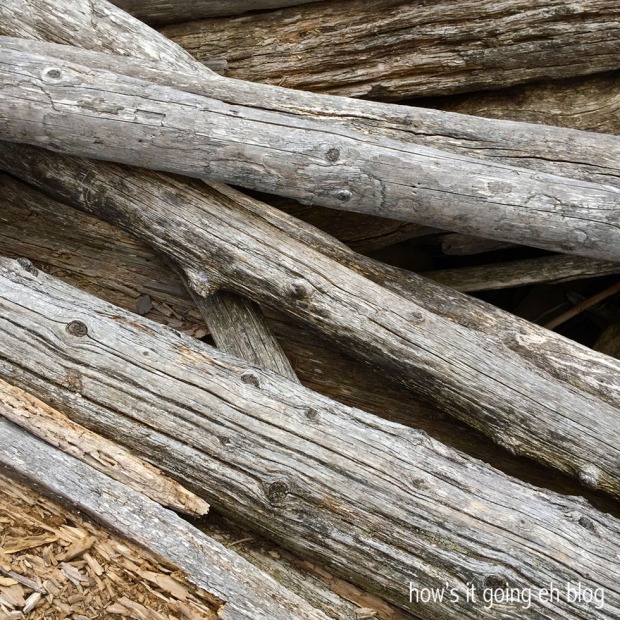 Lava rock?  Any geologists out there? 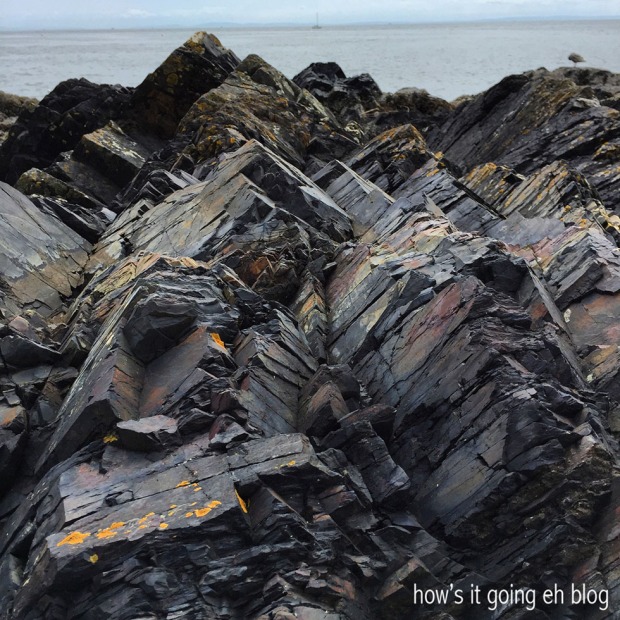 The salty cool breeze was restorative for the both of us! 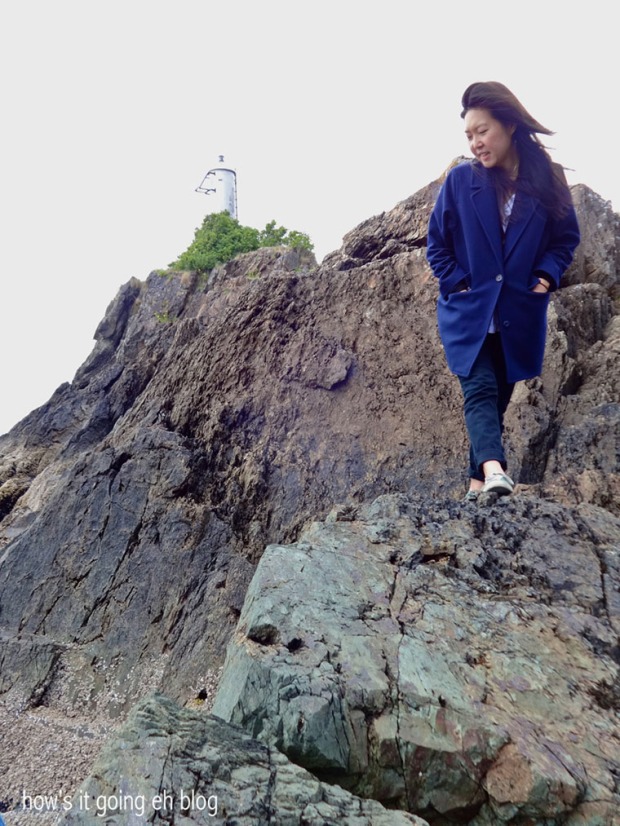 I directed Debbie to climb around the rocks in the most awkward spots.  She is such a good sport. 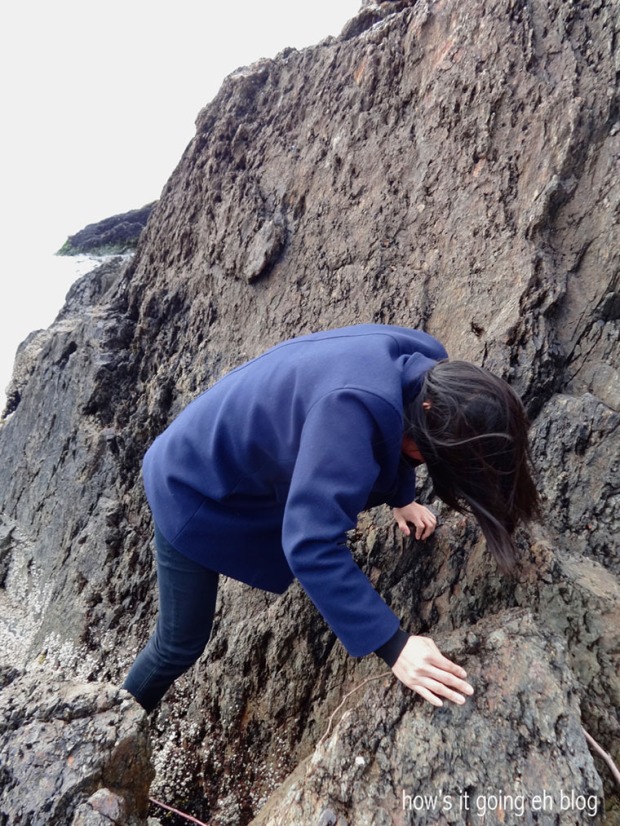 I had to get this picture with the beautiful rock in the background! 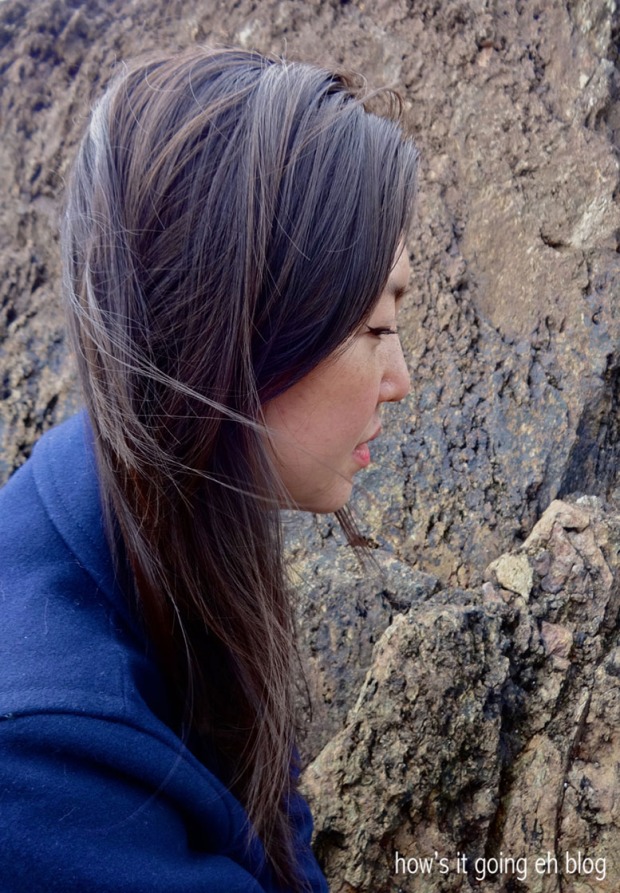 Debbie is one of my best friends in the world + I cherish her!  A true gem! 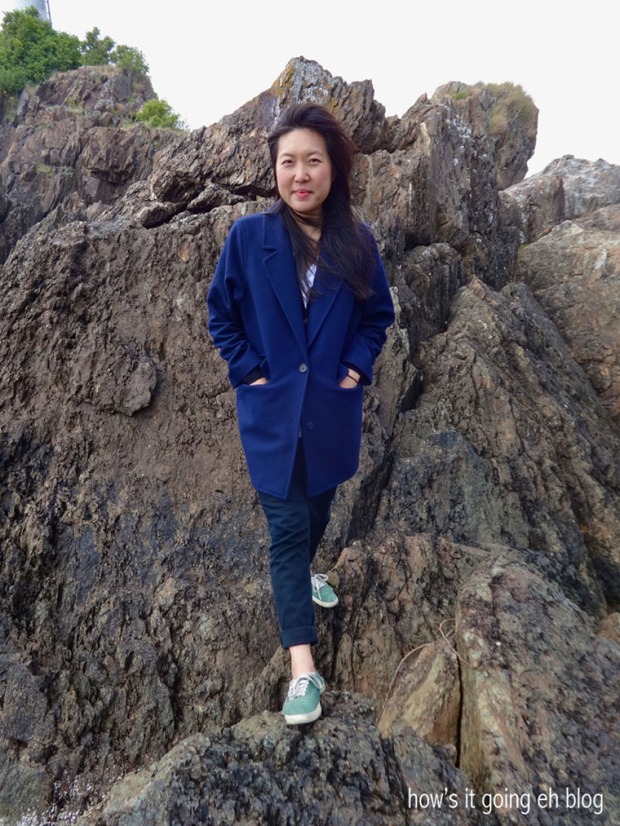 After wandering around + doing fashion photo shoots, we were famished!  Someone told me about a Japanese restaurant called Shika Provisions so we returned to the marina in Snug Cove to find it for ourselves! 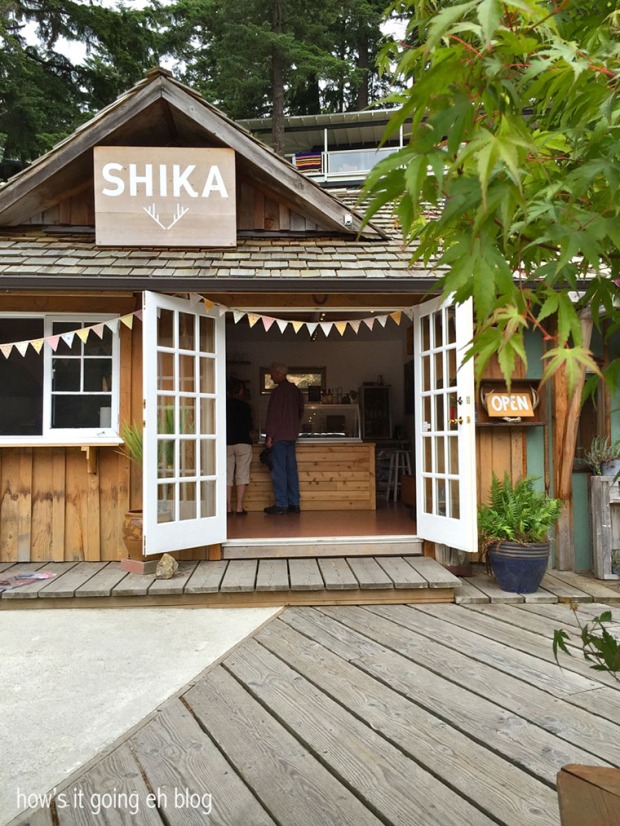 So much attention to detail! 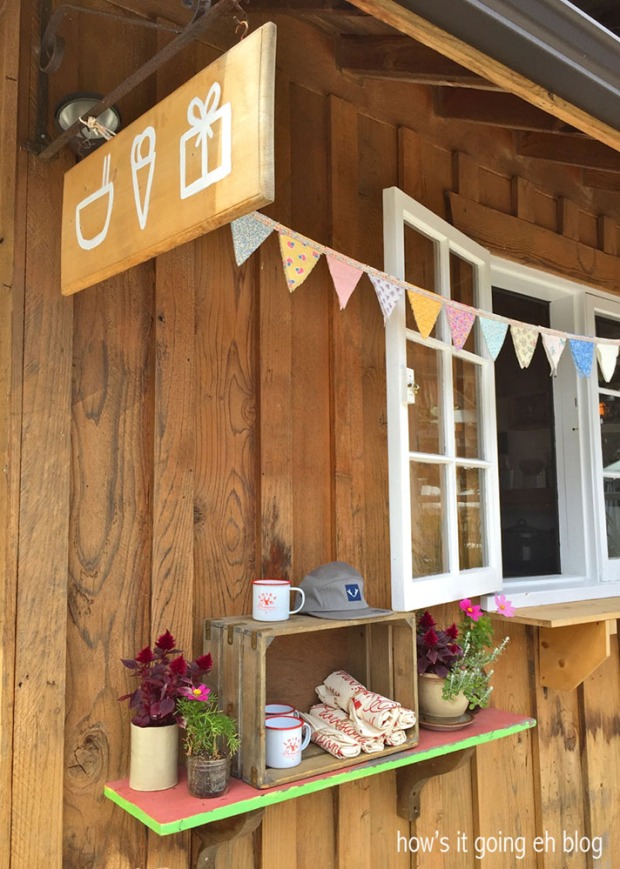 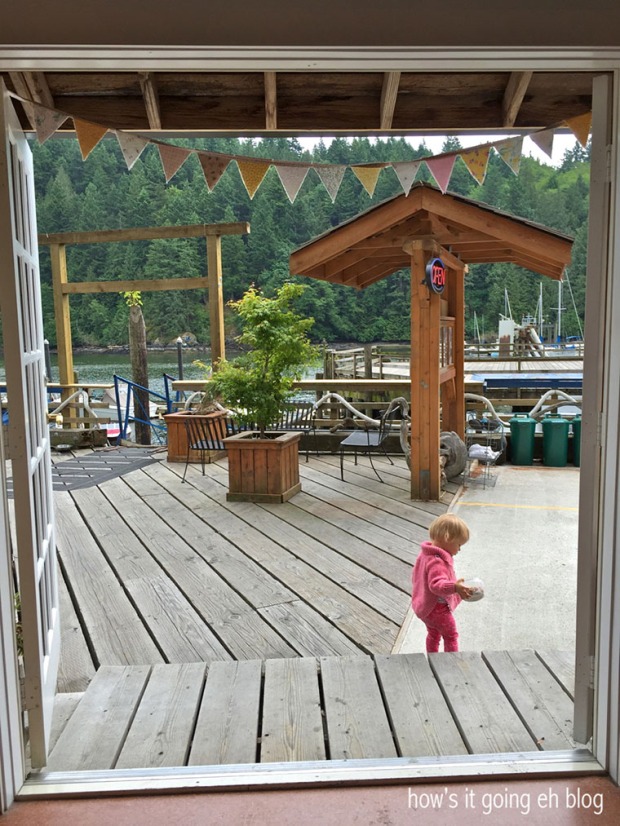 Shika is casual, cool + definitely my kind of comfort food!  Next time I’ve got to try the ice cream! 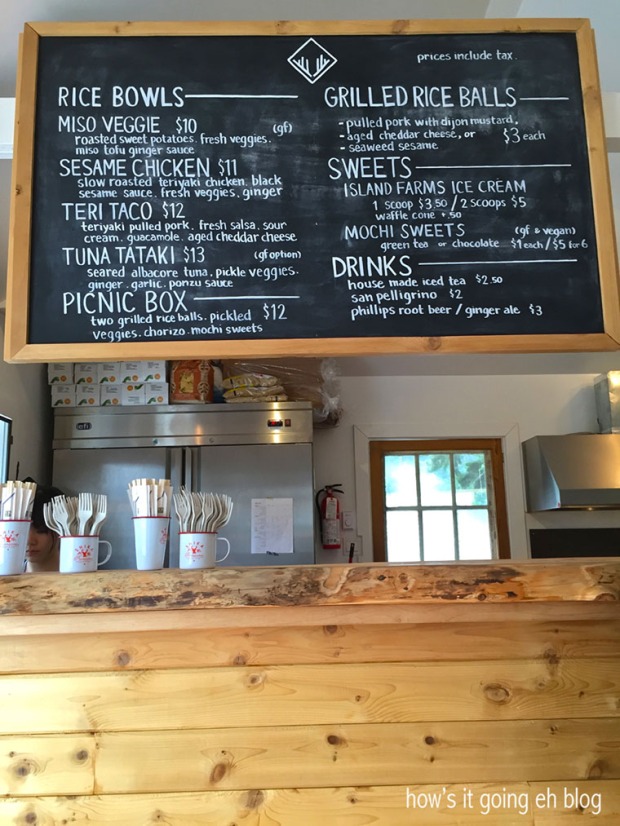 Their merchandising + branding was on point! 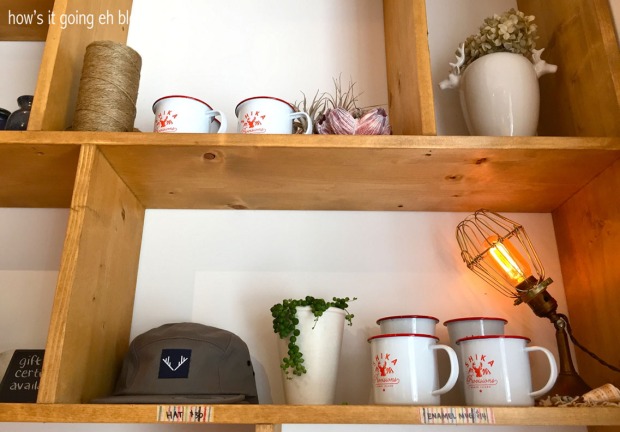 I got the tuna tataki bento.  It was delicate + so light + tasty!  I loved the dollop of black sesame paste!  I loved Shika so much, we sought out their sister restaurant Kuma in Tofino!  Wait till you see those pictures!  Drool!!! 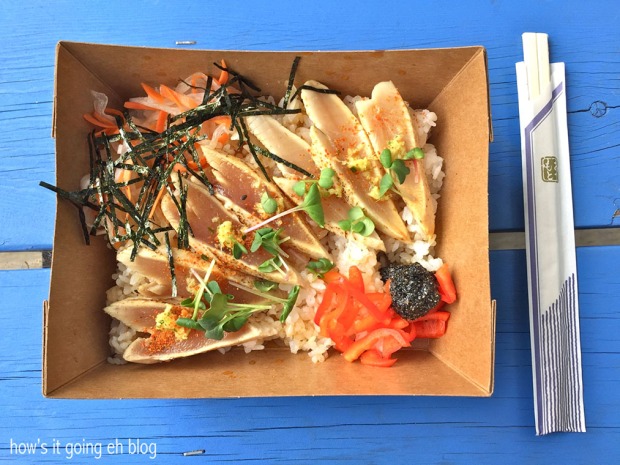 Another plus was sitting on the picnic tables beside the marina looking at the ocean + boats as we ate.  Somebody suggested we eat at Artisan Square + I’m so glad we didn’t.  Artisan Square is surrounded by trees – no view of the ocean.  It has it’s lure for tourists but to be quite honest Debbie + I were not very impressed by Artisan Square.  I’m not saying skip it, but there are many other amazing discoveries on Bowen Island.

With full tummies we rushed back to the “main land” to make sure Jeff + Langdon were keeping to the straight + narrow.  I am definitely going to visit Bowen Island again this summer – there are lots of hikes on the island!  Until next time, friends!  Hope you’re having a bad ass summer!!!