It’s Getting Better All the Time

Now that Langdon is almost one, it’s getting a teensy bit easier every day.

I know that in one of my old posts I called all my mommy friends with older babies big ol’ liars when they promised me that one day soon it would get easier.  And I know that in my last post I complained about Langdon’s pre toddler temper tantrums.  But lo + behold a ray of light.

First things first.  The reason for Langdon’s hellish Dementor behavior last week was bad sleep + horrible naps.  With the time change + schedules getting out of whack, that guy was pissed off like you wouldn’t believe.  Jeff criticizes me for being psychotic about having Langdon home for most naps – but guess what?!  When he sleeps well he is a delight!!!  Look at him gazing adoringly at his father!!!

Jeff questions me no more.

Here he is waking up from a nap + striking me with his best “Blue Steel” look.

A jolly little fellow.  Baby giggles are possibly the most tinkly, merry, melodious sound in the universe.

Langdon is most definitely a character.  I try my hardest not to laugh, but lately he is taken to putting food on his head.  I don’t know where he gets it from because Jeff + I most certainly do not put food on our heads!

In this picture he is not blinking.  He’s scrunching his eyes up tight because this is his version of “winking” at us.  Weirdo.

We try to get out of the house + be social as much as possible.  There was a meetup with my mom group Vancouver Active Moms + Moms to Be at the Vancouver Aquarium. 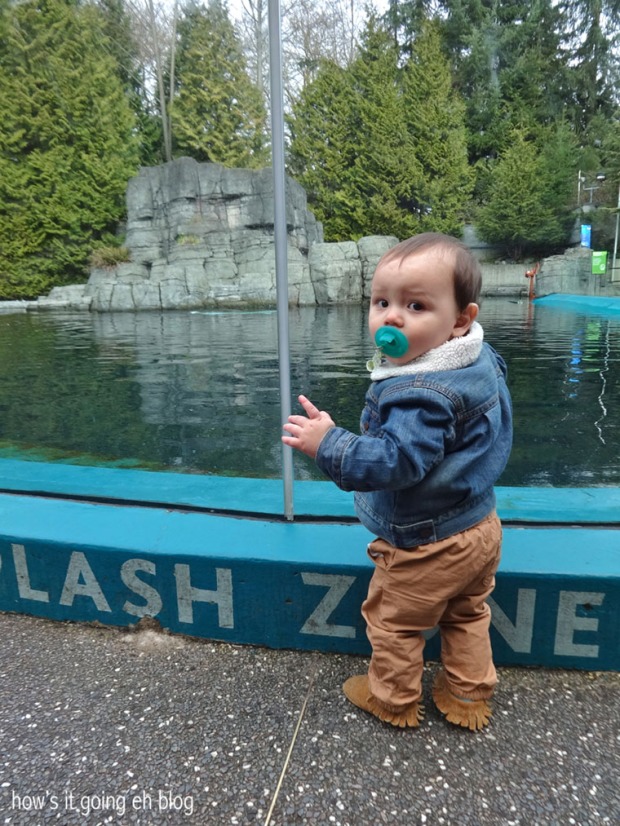 And on another day us moms walked around Granville Island with a stop at the park.

I always think Langdon is such a grown up big boy now – but whenever I see him teensy tiny at the park amongst all the big kids running around his little crawling form, I let out a sigh of relief.  He’s still my baby.

Play dates with his girlfriend Madison.  Having tea time.

I often drive down Fraser + the cafe Sweet Salt always caught my eye with strollers lined up outside the shop.  My buddy Tiffany + I wanted to scope it out.  It’s so cute + SUPER baby/kid friendly!  I let Langdon loose in their little play area + sipped my London Fog!

That is until little Maddie joined Langdon.  It’s so interesting because Langdon is quite the rambunctious ragamuffin at home, but he really is a very sensitive little man.  And Madison is wee + tiny but full of spunk + power!  Look at the two of them!

HAHAHA!!!!  This is classic.  Langdon with his furrowed brow + Maddie with her roar!  Langdon is a little emo rocker Dashboard Confessional boy.  Maddie is the lead singer of The Runaways.

Well, last week Langdon took his first steps!!!
And he’s been standing up like a champ without pulling himself up with a piece of furniture (or me).

What’s that in his mouth???  I just want to tell all you new mommies, it’s the only teether Langdon likes – the Zo-li.  I’ve tried Sophie, the ones you put in the freezer, etc. + he was having none of it.  This teether can get to the spots that need soothing.  It’s kind of shaped like a toothbrush.

Speeding down the fast lane with his walker. 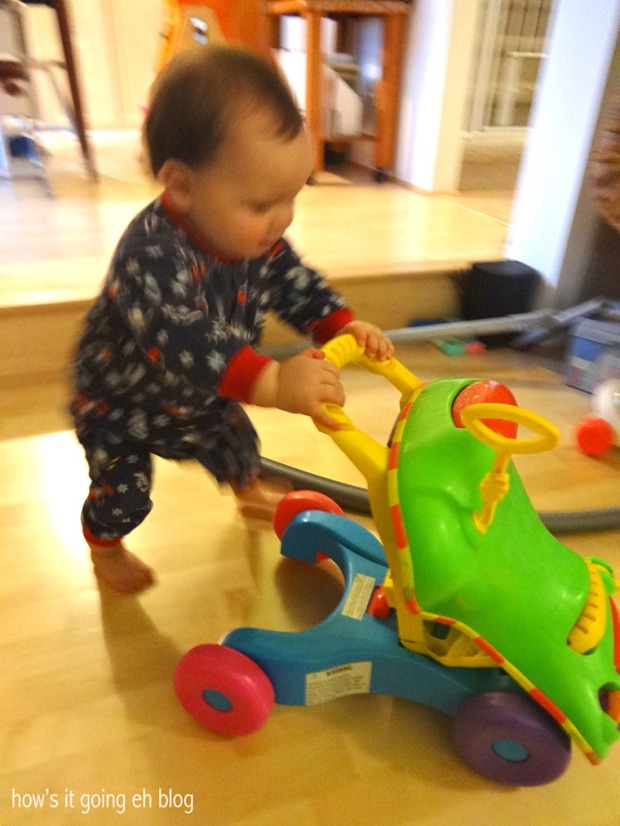 Now Langdon + I can communicate with one another, he’s sturdy enough to not always be so precious with + he can play by himself without shrieking when I step out of the room.  Activities are so much more fun + I don’t have to watch him like a hawk as much as I used to.  All of a sudden one day it dawned on me + yes, it’s become easier!  So take heart new mommies!  It WILL get easier!