Man…..it was a whirlwind week in Ontario.  It just zoomed by like a techno color cartoon on fast forward!!!  We jam packed it in, but there was too much going on, so I have to make this trip a two part-er.

Jeff + I were nervous Nellies about Langdon’s first flight.  Five hours!!!  Yiiiiikes – flying in a tin box with a possibly explosive (in many ways) baby is every parent’s nightmare!!!  One thing that was my saving grace was having the Ergo carrier. 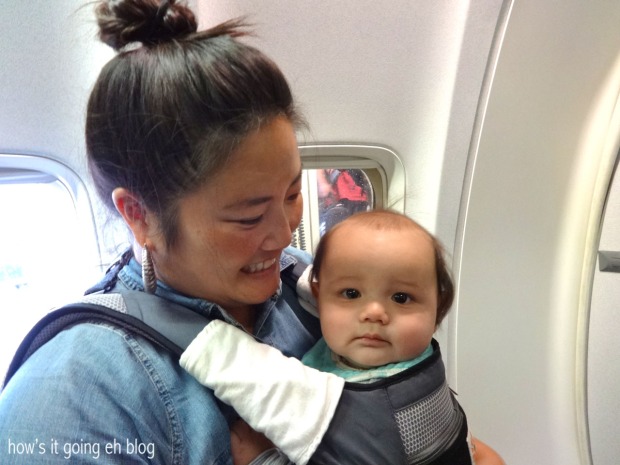 Langdon looks just as unsure + anxious as his parents were!  But he was an A + student – making sure he knew were all the safety exits were.  And he was enraptured each time the flight attendants gave the safety demo.  He already has a thing for the pretty ladies!

Langdon was excited/possibly confused/fascinated with looking out the window!  How does being thousands + thousands of miles up in the air compute with a baby?  We may never know!

Well, he didn’t cry once the entire flight!  He was barely interested in the toys we brought + was more entertained with an empty plastic water bottle, the seat belt, a cardboard box, etc.  Dress your baby in layers.  Before takeoff it’s a hot, stuffy bog + at other times a frigid icebox.  Also, if you are taking a flight anytime soon with your baby – I’m telling you the carrier was essential.  If the little boss got fussy, I carried him + walked down the insanely narrow aisle, Langdon’s little legs kicking every single passenger as we squeezed by.  Kick, kick, kick, kick.  Hahaha, take that adults.

We spent a couple nights at Grandma Jean’s house in Cambridge + the third night we stayed at Langdon Hall!  Jeff worked at Langdon Hall during college as a bartender, Grandma Jean was the tea lady for 20 years + it is also where Jeff proposed to me!  A very special place, thus Langdon’s name!  More on our stay at this lavish + lovely country estate in another post – it’s all luxury + posh posh posh!!!!

Doesn’t Langdon look like an Asian Prince George????  Doesn’t he?!?!

The next day Jeff, Langdon, Grandma Jean + I headed into Toronto.  First things, first – ever since moving to Canada I’ve been DYING to visit a store I found online a long time ago.  Mjolk, is located in Toronto’s neighborhood called “The Junction”.  It was started by a super amazing couple with immaculate taste.  They often travel to Japan to meet + visit with the artisans that supply their gorgeously handcrafted items in the store.

I truly want every single item in the store.

Frank from Mjolk recommended another totally amazing shop down the street called Latre.  I’M SO GLAD HE DID!!! 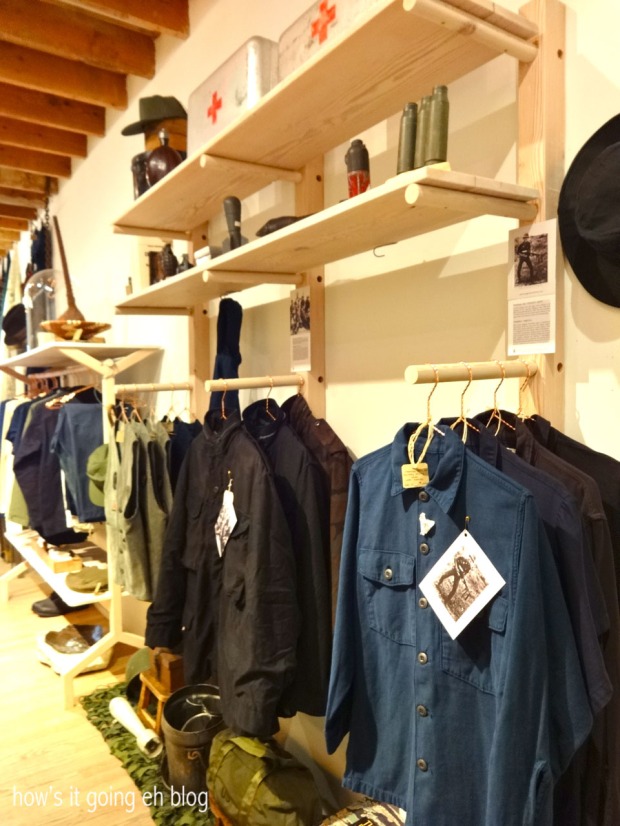 The merchandising, the attention to detail – I was in love with every single aspect about this store!!  Grandma Jean was all in a twitter about it + was extremely inquisitive!  Latre was recently featured in an issue of Canada’s women’s magazine Chatelaine!  Cha cha chaaaaa!

I can see the Japanese go absolutely bonkers for this place.  Cases full of vintage turquoise at the checkout.  Did I mention that this is my kind of store???

He was so0000 nice + talked with us for a very long time.  He told us that he also uses his space as a community gathering spot for art shows, barbecues + other happenings.  GO TO LATRE!!!

The Junction is a 20 minute drive outside of downtown Toronto, but I’m definitely glad we made the trip – it was well worth it.  It renewed my faith in Canadian boutiques + shops.  We hopped into a couple other shops afterwards, but Sir Langdon was getting hungry + I was itching to move on as well.

After so much ooohing + aaahing + looking at pretty things, the three of us adults were just as starved as the little man.  I read about Porchetta + Co. in a Toronto magazine.  Porchetta pretty much needs to live in my belly at all times.  It had started to pour.  Here we are waiting with anticipation for our sandwiches.  Look at how cute Grandma Jean is with her rain bonnet on.  She wanted to preserve her salon ‘do.  Respect.

And this is where I leave you for this current edition of Baby in Ontario.  I would like to say that everyone we met at The Junction were unpretentious, super friendly + enthusiastic!  I find that some shops + people in Vancouver can be pretentious – without having any reason to be pretentious – although there are some gems out there.  Note: my apologies for some of the blurry pictures.  I’m quite disappointed.  It’s hard taking crystal crisp photos when you’re carrying a wiggling, fat baby.  Until next time!!!