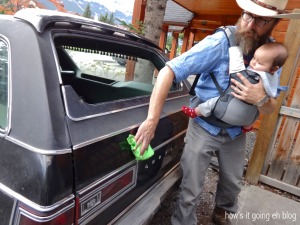 What a week!!!  First snow – IN SEPTEMBER!  Swimming!  Hoarding!  Visits!  Langdon’s life is most definitely a busy one.

Over the weekend it was back to Canmore for more organizing + editing of Jeff’s 40 foot shipping container.  Pulling out racks, pulling out racks, over + over again.  Jeff is like the Sisyphus of boxes + clothing racks.  Here he is turning his face away from the camera + shaking his fist at me in a “Why I oughta” fashion.

We have vintage aplenty.  I’ve just got to find the time + will to try + sell it all.  Piece by piece.  Blech.  It overwhelms me so much that I have a REALLY hard time even knowing where to begin.

There are some perks to all this misery.  Found a pair of vintage cowboy boots for Langdon!  He’s so excited about it!  Win!!!!

Jeff carrying off Langdon into the deep, dark, cavernous depths of Hades.  Look at his wee face.  He was looking at me over his dad’s shoulder trying to say to me with his fear filled eyes, “Mommy!  Haaaaaaalp!!!!  Noooooo!!!  Hoarding!!!!”.  Oh, Langdon.  Dear Langdon.  Yes, this is your life. 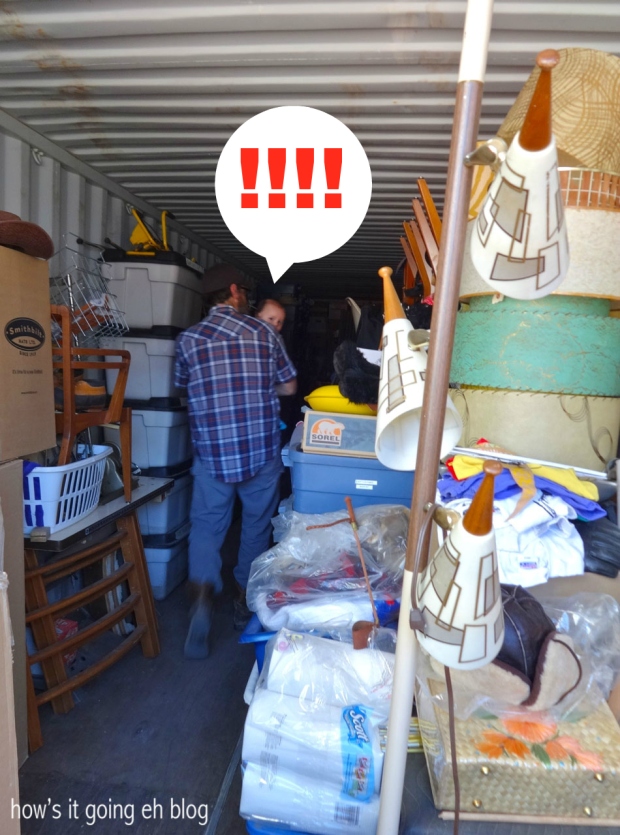 Well, the three of us were entirely wiped out that night.  Jeff + I are truly blessed that Langdon is such a tolerant baby because we drag him around + he puts up with so much from us already, poor thing.  We booked a room at a hotel in Canmore – the next morning Langdon happily slapped his toy in his dad’s face as he was trying to rest.  That’s my boy.  By the way, doesn’t Langdon’s hair + chewable legs look amazing? 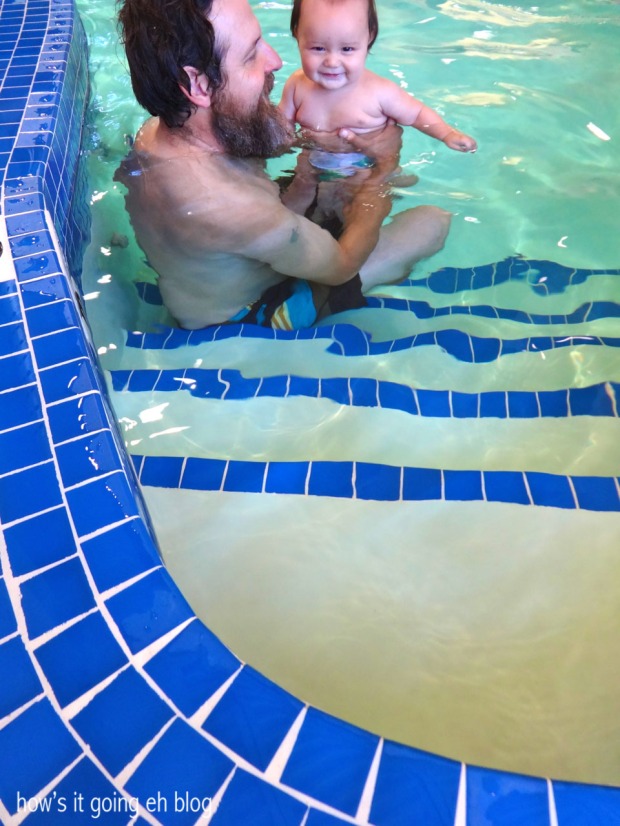 Langdon is like, “What in the sam hill is up with the freaky faces, people?”.

Jeff put Langdon in his Swimava ring + it was joyful fat baby arms + legs swim, swim, swimming away like a little Nemo!!!  I’m so glad we bought him the Swimava – it’s the best baby invention ever!!!

Look at how excited + bright eyed for swimming this baby is!

I’m telling you people, the Swimava is amazing.  That day Langdon slept like A BOSS.  Nap time + night time out like a light!!! 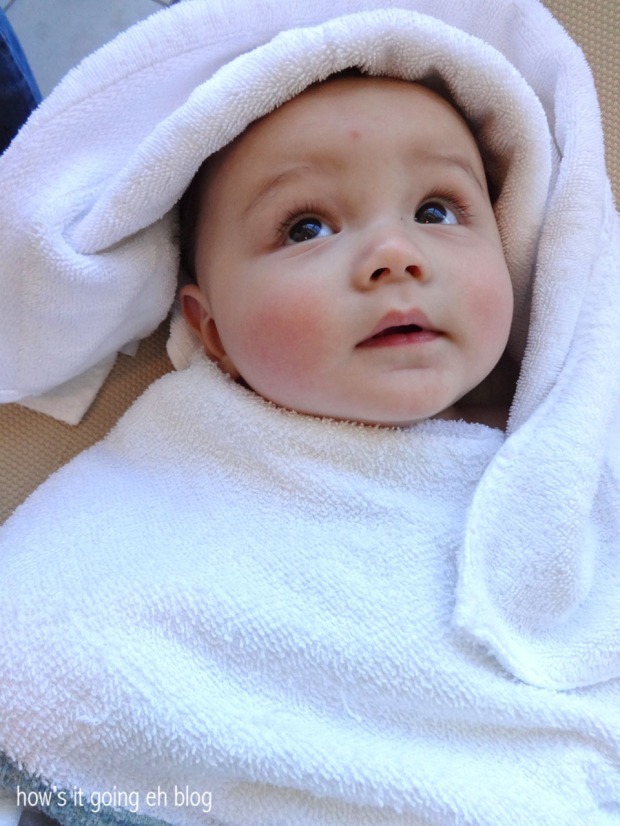 Later that day we went to check on Jeff’s 1977 Chrysler Town + Country station wagon.  He was prepping it to get a little work done on it, to hopefully rent it out to some of the TV shows that will be set in the 1970s shooting here in Alberta.  It hasn’t been moved for 7 years.  Help me.

Oh, you didn’t know that we have a vintage station wagon in Alberta???  Did I forget to mention it?  What weird, random things DON’T we own?  It’s a really long story + I can’t get into it because I’ll lose my mind.  Anyways, Langdon was helping his dad polish “the hearse” up. 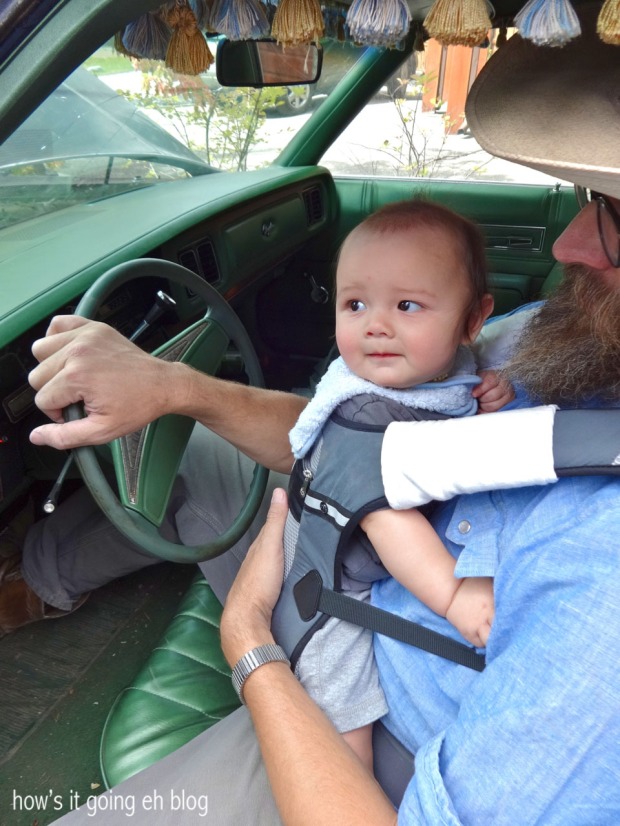 The weekend in Canmore nearly killed us.  Langdon + I were exhausted from the running around, organizing + long drive.  This week it’s been SNOWING for the past two days!!!  Snow in early September!  Can y’all believe it???!!!!  And a major power outage!!!  Tree branches snapping + breaking from the weight of the snow!  “Welcome to Canada!” was Jeff’s explanation.  Thanks, Canada.

Wednesday morning I wore Langdon + we set out for a walk to visit my dear neighbor who I lived next to in Black Diamond last year.  Langdon’s first reaction to the snow!  I love sharing these moments with Langdon.  The wonderment of experiencing first time moments in this big, big world!

“Eegads!!!  What is all this cold, fluffy stuff?!” asked Langdon.  It was tickling his little face + he was getting all squiggly with delight!  Our first taste of the snow was like la dee dah magical + then it got all Perfect Storm on us as you’ll later read!

I loved living next door to Katie last summer.  She is the sweetest, most gentle person.  Langdon + I tried to visit as much as possible this summer because Langdon loooooves him some Katie!  She is amazing with babies.  Langdon is going through a phase where he gets all frowny face around anyone who isn’t me or Jeff.  But Katie has the magic touch + Langdon always adored being held by her!

And I loved visiting because Katie always fed me her homemade ginger snap cookies + muffins!!!  Yum!!!  We’ll miss her so much!  We said our goodbyes to her + we were all so sad!

Well this Southern California girl was FREAKING OUT walking to her house + back in the snow.  The entire time I was walking like a jerky, weird robot + looking at the ground with each step thinking, “Is that ice?!  No it’s not.  Is THAT ice?!?!  No it’s not”.  It was wet snow + gusty, biting wind.  My head was going a mile a minute.  “This was a bad idea.  I’m a bad mom.  Langdon’s going to get frostbite on his nose + be disfigured for the rest of his life.  Maybe I should call someone to come pick me up in their car.  Are we going to freeze to death?!  There’s going to be a whiteout + I’m not going to be able to find my way back home.  Don’t fall.  Don’t fall.  Don’t fall.” I was tripping out, yo.  If I wasn’t white knuckle gripping onto my umbrella, I would have been wringing my hands together in woe.  Mother Nature you hateful wench!  The house seemed so faaaaar awaaaay!

Can you believe how much snow fell in early September?!

Folks, another exciting, exciting thing happened this week!!!  MY MOM IS IN CANADA!!!!  Thank Zeus!!!!  She is going to help me drive young Langdon Takehiko David Fayle back to Vancouver!!!  Langdon hasn’t seen grandma since he was 3 months old!  At first he was all skeptical.

The Alberta Summer chapter has come to a close.  When I first arrived with the baby I felt isolated + lonely + crazy with a fussy, crying baby in a tiny country home.  But of course now I’m very sad to leave.  I have some amazing friends here + met a couple of really cool moms this summer.  And nothing beats the endless blue sky, the mountains + cowboy country.  It’s truly gorgeous + I really feel a deep affection for Southern Alberta every summer that I’ve spent here.  I will miss it as I always do every time I leave.  Well, stay tuned – road trip to Vancouver with a loco 5 month baby to come!