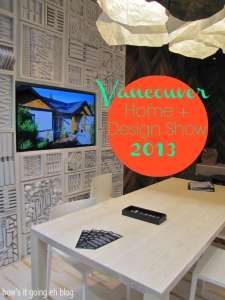 Fun times to be had at the Vancouver Home + Design show!  Way more fun than I expected!

So with slick, high design as my template, I was feeling a little bit snobby + smugly thought to myself, “Harumph, let’s see how Vancouver compares in this department!!”.  Imagine it in a Thurston Howell the Third voice.

I attended the show with my new friend M – yes, I made a new friend!  Through this blog!  It’s so difficult to meet new people in a new country + this blog has actually helped me in that department!  (Shout out to my home girl Michelle in Calgary!)  Take a look at her super blog: Redesigned by M!  Beautifully styled photos + great DIY transformations!  She was an interior designer when she lived in Seattle, so she was the perfect companion!

M + I hopped the train, exited at Chinatown station, walked a couple blocks, + then descended into the behemoth that is the BC Place stadium.

When we entered the building, we grabbed fluorescent green bags.  What were they for?  I’ll tell you later.  Pay attention to the next pictures because you’ll see attendees all clutching their green bags.

First on the agenda was guest speaker Annie Sloan‘s talk on her famous chalk paint.  M + I were like, “Huh?”.  A whole talk on chalkboard paint?  OH NO, PEOPLE!!!!  Annie Sloan is magic!!!  She is known as a pigment expert!!!  What’s fascinating about Annie Sloan is that her background is in fine arts.  She developed her chalk paint (the name is confusing – it’s called chalk paint due to the matte quality of the paint, not because she wants your 5 year old to doodle on it with chalk) + it can be used on ANYTHING!!!  Wood, metal, plastic, leather, fabric – ANYTHING!!!!  It is finished off with a wax coating + buffed.  Different chalk paints can be layered + sanded to create depth.  It’s very thoughtful + Annie Sloan is so intellectual in her presentation + method.  The technique is not Susie Homemaker but very painterly + artistic.  Plus she’s a cheeky Brit that’s quite funny!  I put the happy face on the back of the guy’s head because it was distracting me the whole time. 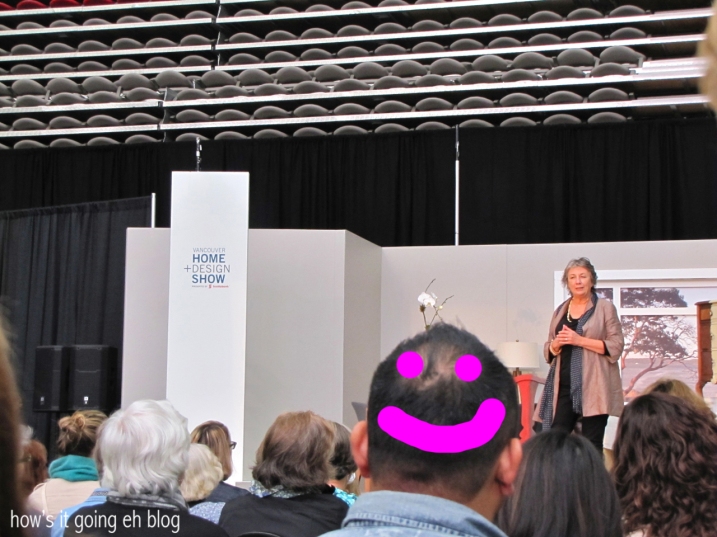 We were enamored with Annie Sloan!!!  Here is her logo + booth.

Demonstration of the different uses of the chalk paint.

I didn’t know this, but there is hella food samples at the show!!!!

There was a huge line up for lamb chops from Urban Fare with a donation for the BC Children’s Hospital.  I shouldered my way up to the front + without asking, the chefs posed for a picture!  The bald guy is like, “What?  We posing?”.

I didn’t have a chop but M said they were deeelish!!!

I thought the home show was going to be all about….well, homes!!!  But there were gadgets + demonstrations galore!!!

M + I always asked a lot of questions + enthusiastically said, “Hmmm!!” or “Wow!”.  The exhibitor would get all hopeful about a possible sale, but then we’d say, “Thank you!” + walk away.  We can’t buy every gadget in the building! 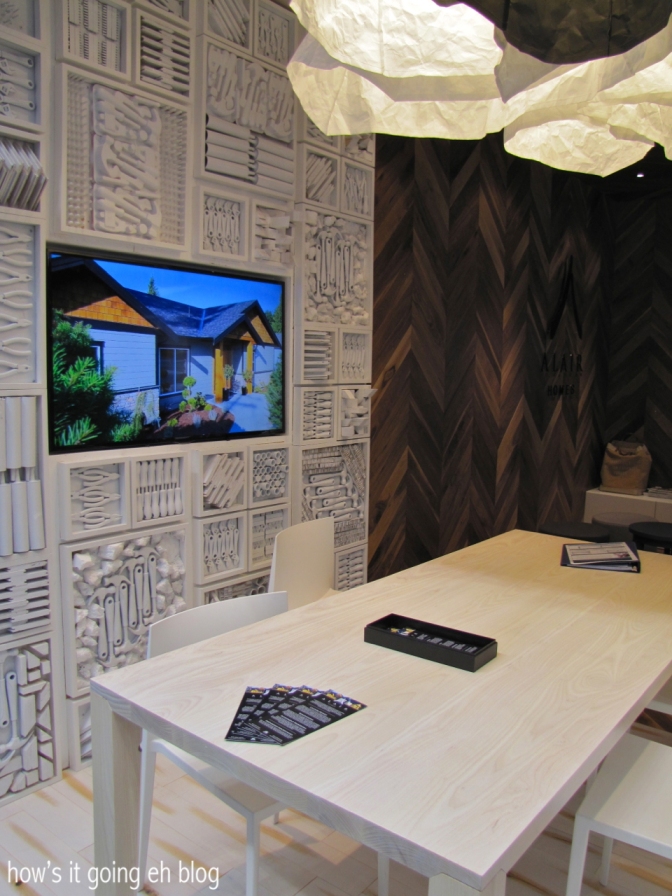 We arrived at this booth…

Immediately M saw this girl + asked her, “Hi!  Can I take a picture with you?”.  Then M asked me if I wanted a photo with the petite lady, to which I replied, “Suuuuure!”.  Afterwards M whispered to me, “You don’t even know who that is, do you?”.  “No!” I happily said in ignorant bliss.  It was Jillian Harris who I guess used to be a bachelorette on the show “The Bachelor” + I guess she’s on an HGTV show called Extreme Makeover?  M laughed at me because I’m the worst entertainment industry person + I never know who anyone is.  I looked like a tomato in my picture with Jillian (who is super sweet), so here she is with some glamorous people.  She is to the right of the gentleman.  Oh, + the guy was wearing a sassy yellow cravat just in case you were wondering. 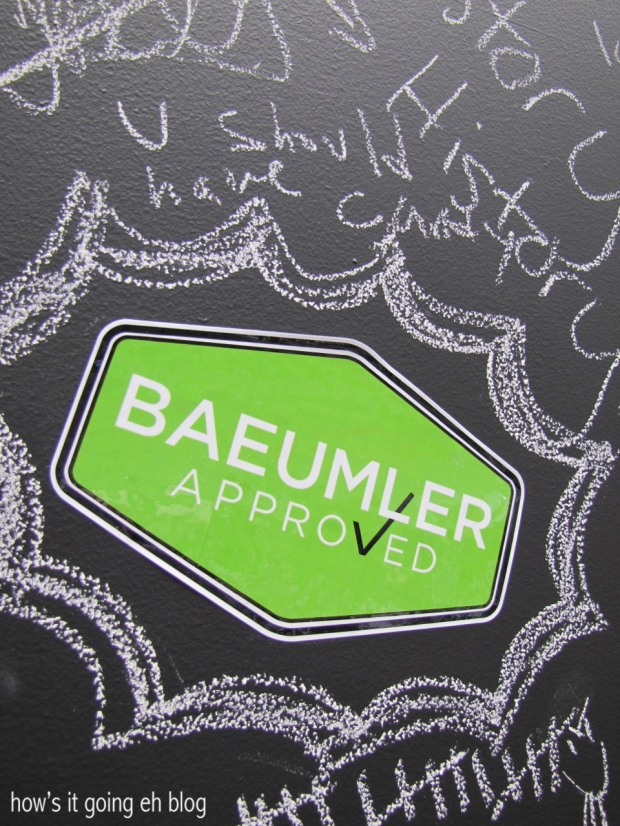 Brian Baeumler is a Canadian home repair god who has several shows on HGTV.  If Jeff didn’t marry me, I’m sure Brian Baeumler would be a close second.

So here’s an unexciting picture of a woman demonstrating an iron. 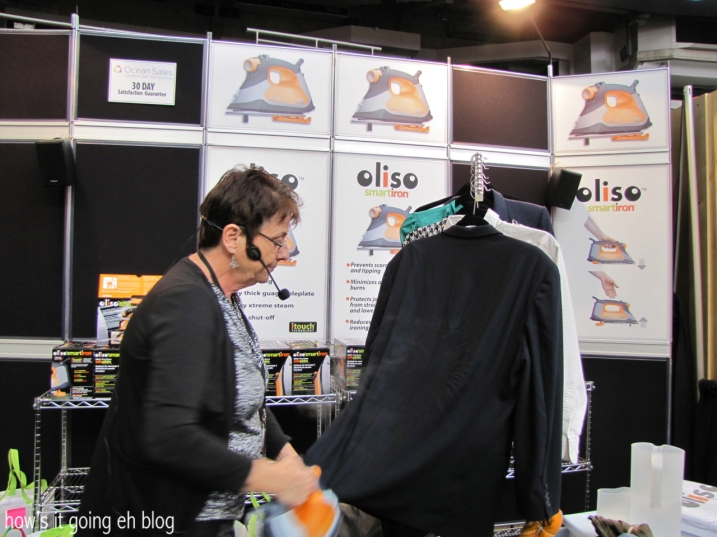 M + I bought a hand vacuum + an iron that day!!!  We felt like wives from Mad Men, but I’m telling you these products are awesome + I love my vacuum SO MUCH!!!  Yes, I love vacuuming.

A display of sacks of grain from my people: 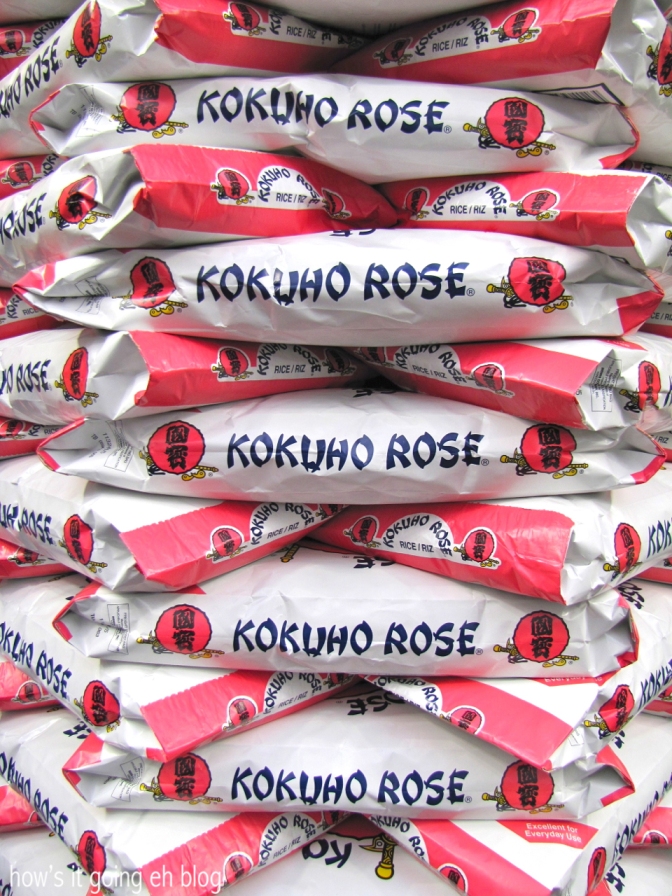 A row of peeps sitting in massage chairs.  There were a strange amount of chiropractic + orthotics booths at the show.

See all the green bags???  Okay now it’s time to reveal the importance of the fluorescent green bags that we picked up at the entrance.  You wanna know why you need them???  FOR ALL THE FREE SCHWAG, YO!!!  Free samples to the max!  We got free rice, free parchment paper, free shampoo + conditioner + a free tube of caulk as a prize!!!  And we snatched every flyer, coupon + brochure we could grab!  We were walking around the show like ballers!!!  It was like Halloween – trick or treat, yo!  Also, when I mentioned all the food at the show, we filled up on yogurt, pulled pork, flax seeds, cheese….so much free stuff!!!  M + I like to live on the edge!

There were also boring things at the show like insulation people, windows + rain gutter cleaners.  By the time we were leaving, it was so crowded, that it was wall to wall people, pushing + shoving!

In general the Vancouver Home + Design show is not very design-y + kind of unimpressive in that sense.  But it is way more fun than the Dwell on Design show!  Because it is less nose up in the air + there’s more food, free stuff + activities!!!  Check it out next year!