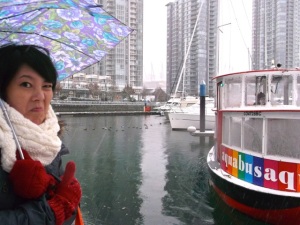 Yesterday was CRAZY snowing!!!!!  Unusually so for Vancouver!  Ok, note to East Coast readers – maybe not CRAZY snowing, but for West Coasters it was CRAAAAAAAZAAAAY!!!! 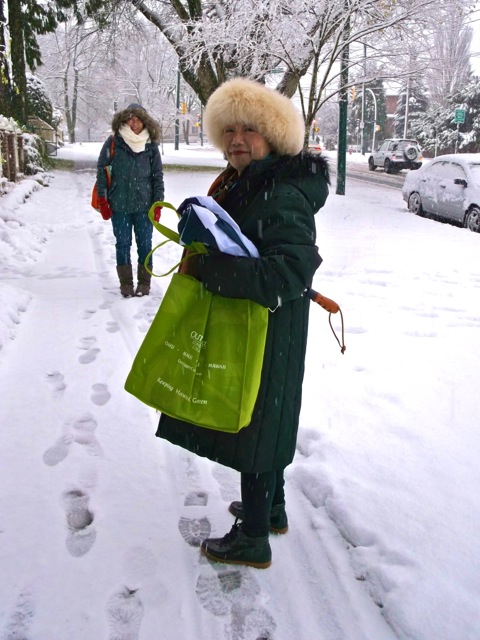 We trudged our way to the train station…. 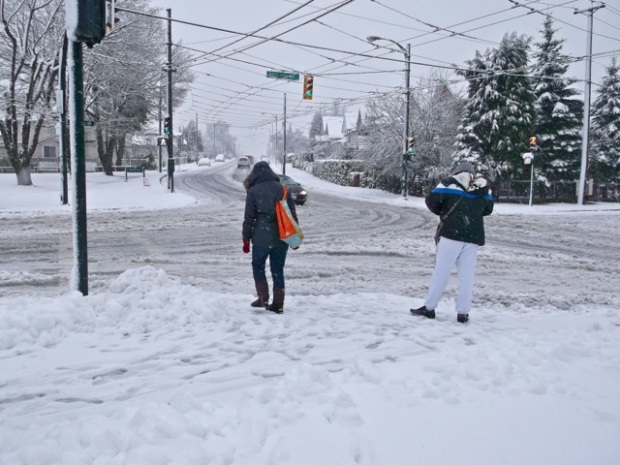 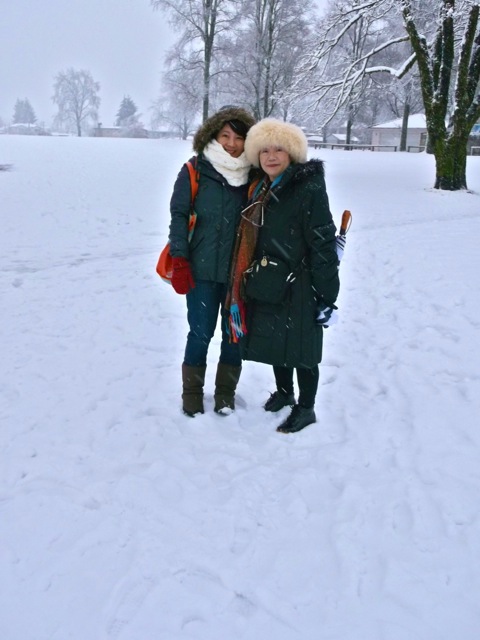 We were heading towards the Vancouver Art Gallery + we exited Granville station.  Granville station drops you out underground into the belly of Pacific Centre, downtown Vancouver’s grande dame shopping mall.  Here’s Ashley at The Bay drooling over their iconic striped duffle coat. 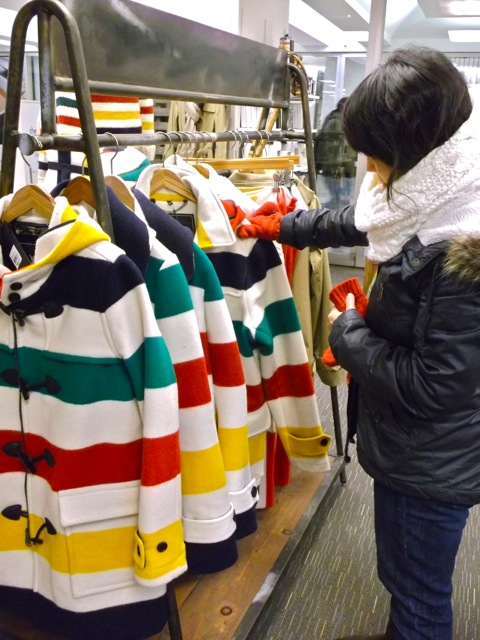 The Hudson’s Bay Company is North America’s oldest commercial corporation that in the 17th century began as a Canadian fur trading post. 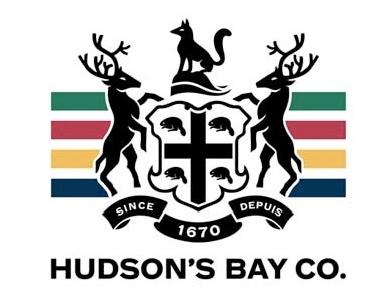 The Hudson’s Bay wool blankets (known as “point blankets”) were traded to First Nations + Native Americans for beaver pelts.  Indigo stripes threaded onto the blankets symbolized “points” + indicated to the weight + size of the blanket without having to unfold it.  These blankets were sought after by First Nations + Native Americans due to the fact that they held in heat even when wet + were easier to sew than hides.

There is much controversy surrounding the blankets because it is widely believed that British administrators supported the handing out of the blankets that were contaminated with smallpox, as to wipe out the Native population.

Okay so I totally went on a tangent.  Sorry, back on track.  Shopping.  The main reason we went into the mall was because they recently opened up a Topshop in the Pacific Centre!!!!  Topshop is a SUPERCUTE British clothing company that only has 4 locations in the United States so we HAD to stop in! 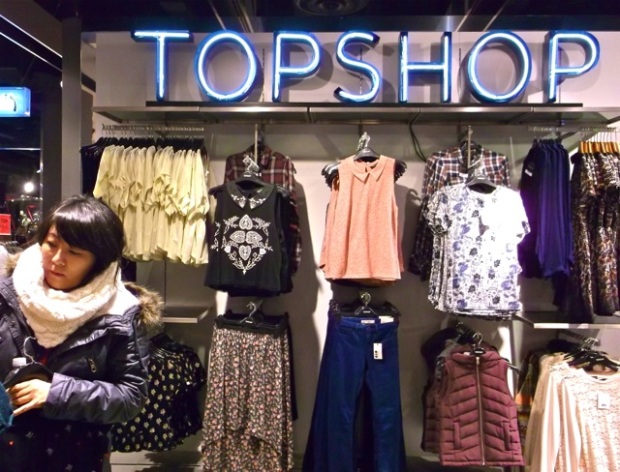 I am so going back.

Outside of the Pacific Centre is the Vancouver Art Gallery. 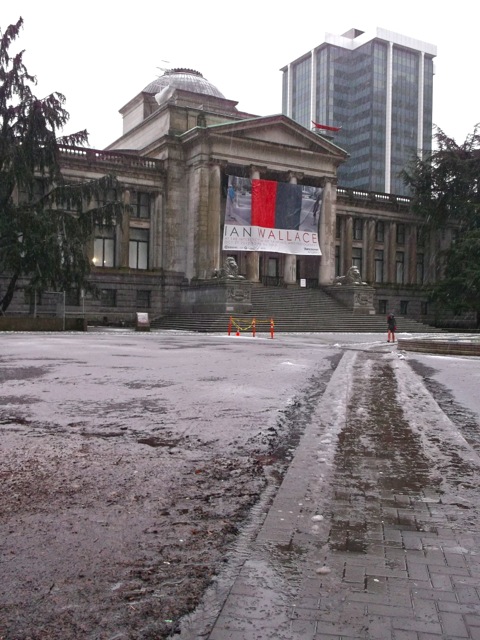 Doesn’t the museum look like a dark lord’s manor???  Well it does to me!  Canadian artist, Ian Wallace’s exhibit is still going on.  You can read more about him here, when I came to the museum with Jeff’s father last month.

Here is me mum enjoying some conceptual art.  She said to me, “I really enjoy art by people that are half crazy.  Because they create worlds that are beyond our imagination.”.  I love my mom. 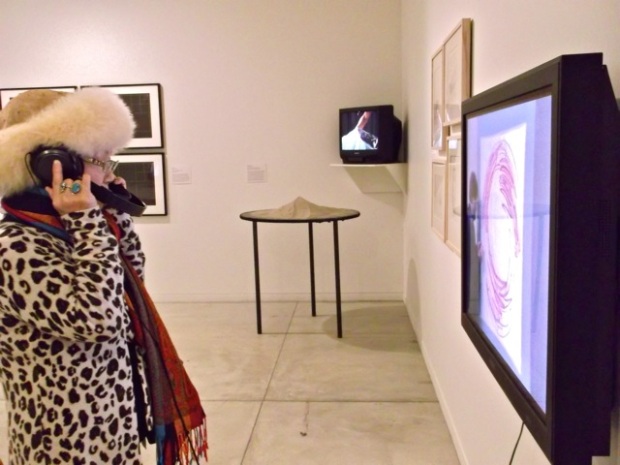 We zoomed through the museum (it’s really not that big) + struggled our way back through the subways + walked down to the water taxi in Yaletown.  Yo, dragging these women through the sludgy, pouring wet snow is like watching a comedy skit!!!  It was like dragging wet sand bags down the street!!!!  Oh thank the lord, here’s our ride! 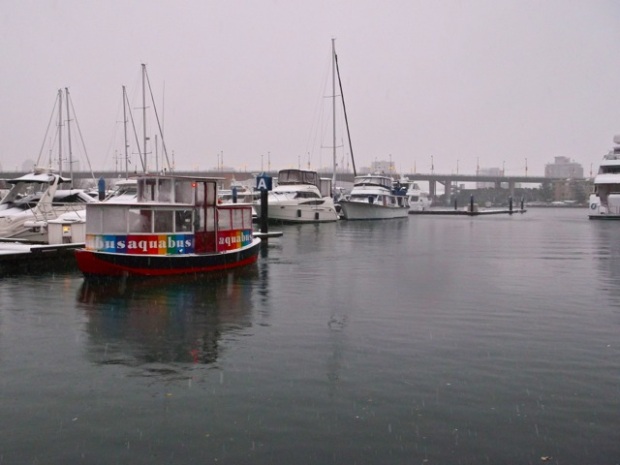 Because someone was getting REALLY cranky!!!!! 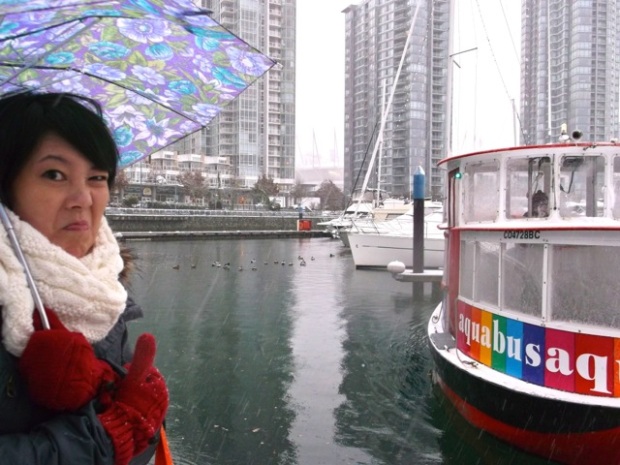 We were like wet, starved cold rag dolls.  If rag dolls ever get hungry, that is.  We gratefully boarded the water taxi + headed towards Granville Island. 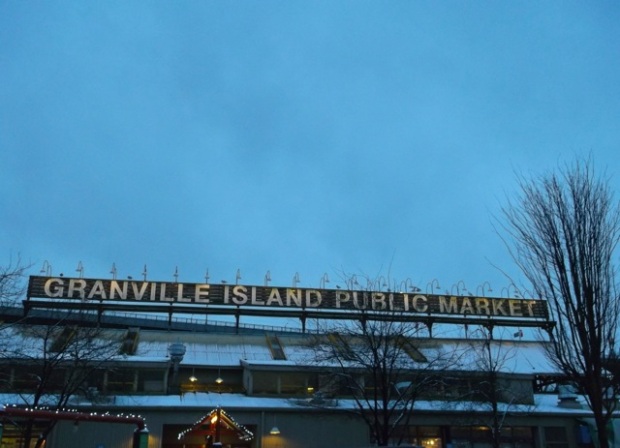 Ashley only brought Uggs to Vancouver + I’m like, “Ashley!  Girrrrl are you crazy?!  You don’t wear suede shoes in the rain!!!!!”.  Silly Southern Californians don’t understand weather.  I still don’t.  Her feet were soaked through!

After we gorged ourselves on some food she was A LOT happier.  Especially while ogling chocolate. 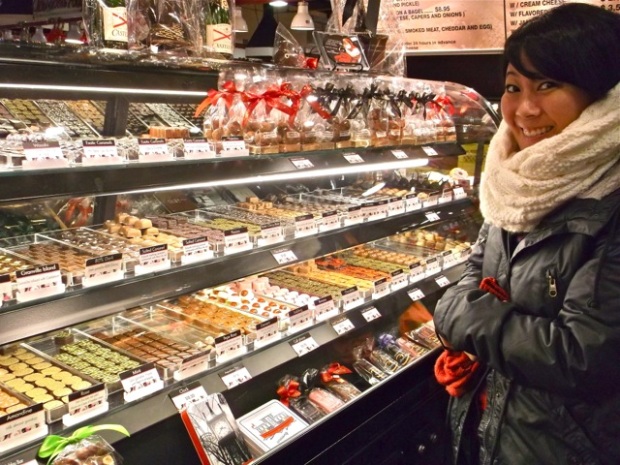 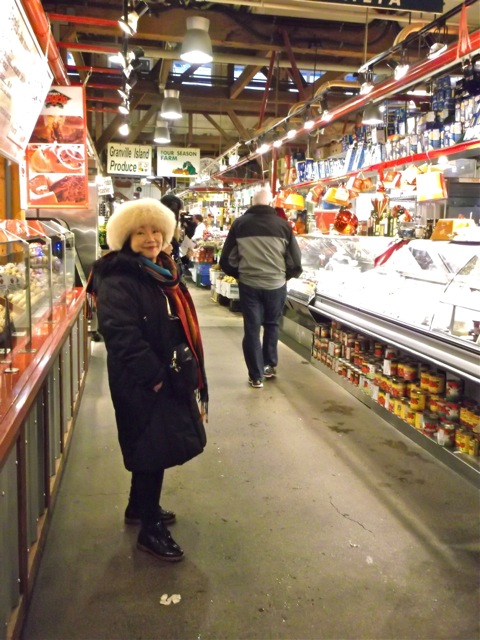 Although it’s packed with tourists, there are so many high quality vendors at the market that it is much loved by locals as well! 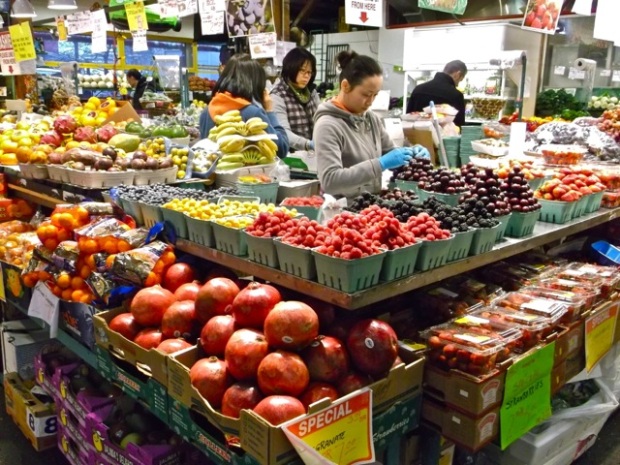 I loves to get flowers at the market!!! 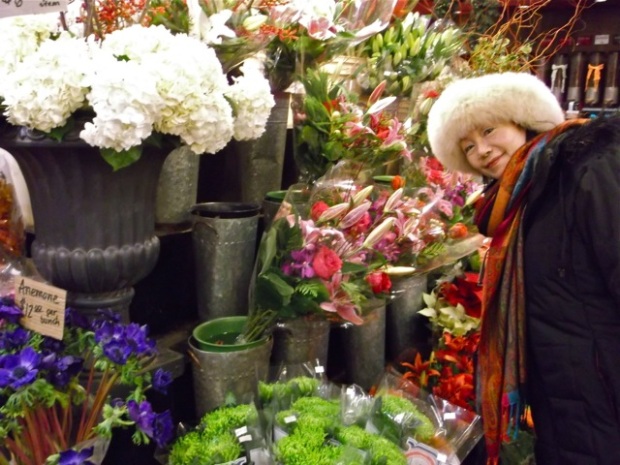 By the time we exited the market, night was falling + more importantly IT STOPPED RAINING + SNOWING for the trip home!!!!  PRAIIIIISE JESUUUS!!!!!! 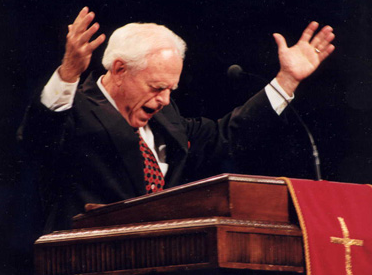 How beautiful is Vancouver when it’s not raining??? 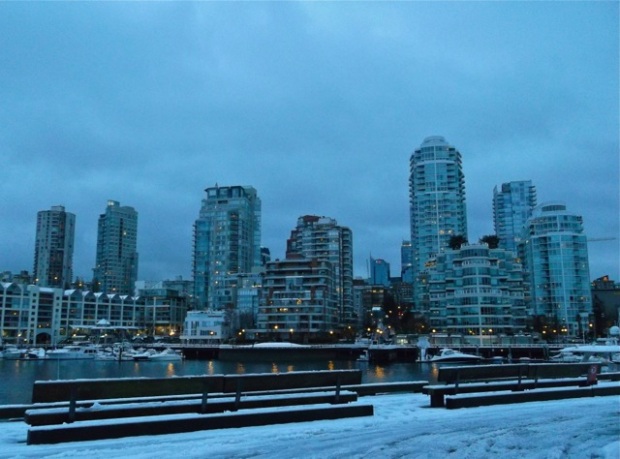 It was a lively adventure taking the train + walking around downtown on one of the worst weather days in Vancouver!  My family was a couple of troupers + I’m sparkling with happiness that they experienced a real Vancouver day!!!! 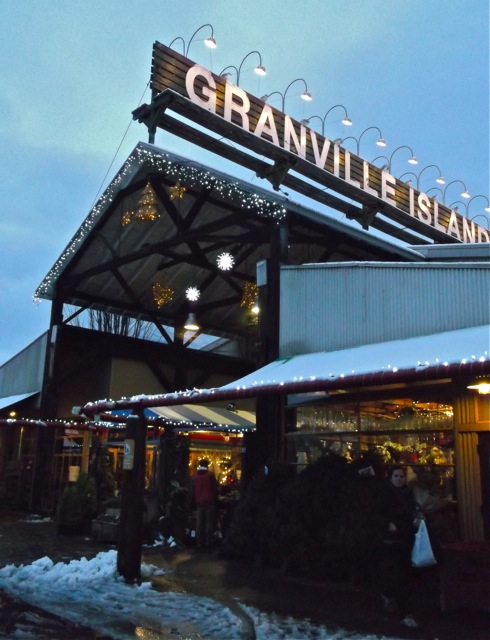