Heyoooo!!!!  Time is quickly running out on us!  We have one week left in Calgary!

Jeff + I were determined to make good use of last weekend.  That did not happen.

On Saturday we spent most of our time buying a tow trailer at Canadian Tire.  What?  A tow trailer?  Yes, yes, yes, I know.  But before I get into that situation, let me explain to my Yankee friends about the glory that is Canadian Tire. 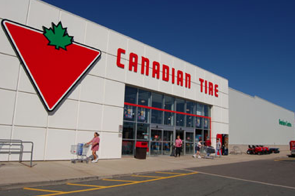 The first time Jeff drove me up to a Canadian Tire, I was like, “Wow, this is a really big store for just tires.  Why are we here?  Does Jeff need tires???”.

And youwannaknow what else?!  They got Canadian Tire Money!  It’s so crazy, I know.  With every purchase, you will be given Canadian Tire Money in 5-cent, 10-cent, 25-cent, 50-cent, one-dollar, and two-dollar denominations – depending on your total purchased.  The first time I was handed Canadian Tire Money I was like, “Huh?”.  You can save this money + use it to buy an ice cream maker!  Or a canoe oar!  Whatever your heart desires!

There’s good ol’ mascot Sandy McTire in his jaunty, saucy Tam o’ Shanter.  Truth be told, he scares me a little.  Couldn’t they make him look more like Sean Connery?

Okay back to the weekend.  Sorry for the tangent, but Canadian Tire is a mystical beast to me.  Tow trailer!  We bought a tow trailer to haul some of Jeff’s shipping container items to our new home in Vancouver!  But first, you have to bring your proof of purchase to obtain a license plate!

And yes, you can get an Alberta license plate with a British Columbia driver’s license.  Speaking of license plates – how cute is the Nunavut license plate???!!!! 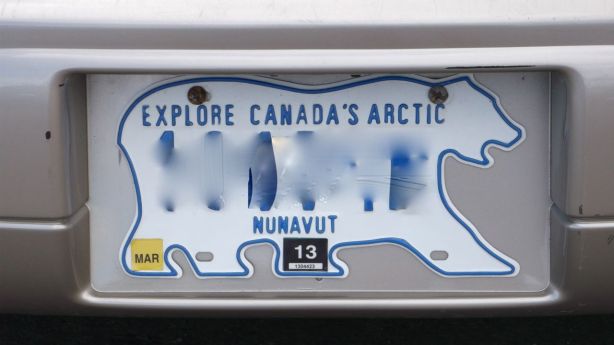 I had to take a picture of it, because who knows if I’ll ever make it to the Canadian Arctic?

I’ve never learned so much about trailer hitches, trailer couplers, hitch balls + locking down a trailer. 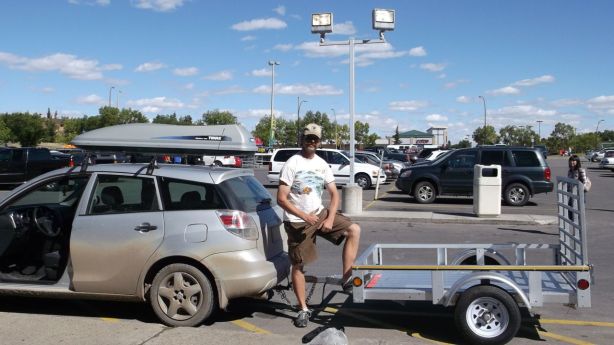 All of this has been causing my left eye to involuntarily twitch.  And that is no joke.

At this point, it was late in the afternoon + by the time we reached Exshaw we decided there was no point in getting crazy in the shipping container. 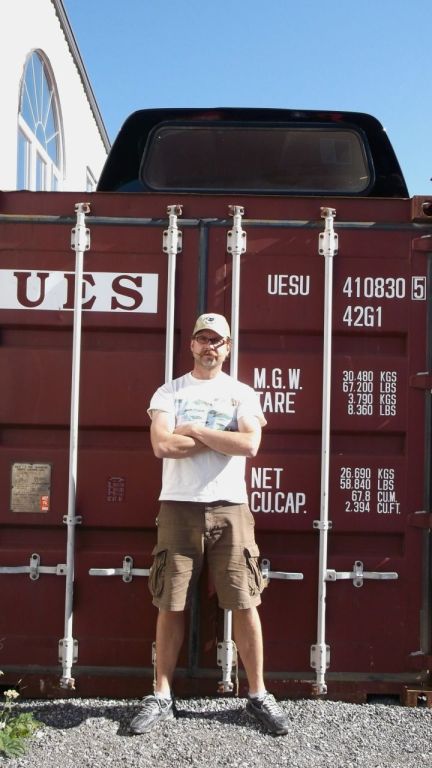 So, we made a brief appearance, handed over some checks + buggered off.

But we did go to his buddy Roger’s house to pick up the grody couch, chair + ottoman to donate to the thrift store.  No one from Craigslist wanted them! 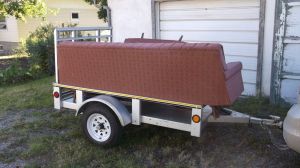 We ditched the trailer + sofa at Dolly’s house, cleaned up + headed to Karen + Kyle’s house.  Karen had family staying for the weekend + when we arrived everyone was congregated in the backyard.  Karen had paella cooking on top of the fire pit.

HOW COOL IS THAT?!?!  Just when I think that Karen can’t get any cooler, she always tops herself!  And she is the master at large group entertaining!!!  Always effortless + stylish!  When I entertain for large parties I’m like:

Jeff was straight up chillin’.

He deserves it after working 70-80 hours during the week on “Hell on Wheels” + every weekend dealing with the shipping container + the garage.  But, at the same token, if Jeff didn’t have SO MUCH STUFF he would have the luxury of RELAXING on the weekends, like a NORMAL person!  Oh, I’m such a sympathetic wife.

After the extremely tasty paella, we roasted marshmallows on the fire.

Little Juna was the marshmallow monster for the evening! 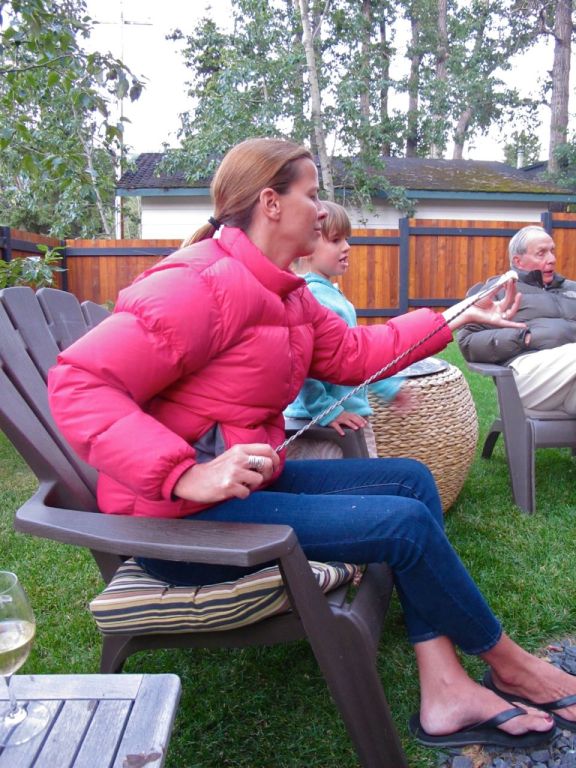 Thank you, Karen + Kyle for your never ending, generous hospitality!!!!

The next day proved to be mildly unproductive as well.  But, we were able to get a load of Jeff’s books off to donate to the Canmore Library!

I had called the library ahead of time, to let them know we had a large donation.  But when we arrived, the librarian immediately got on the phone + in a panicked voice I overheard her say, “Yes.  Yes, they’re here.  They’ve brought an entire TRAILER FULL!!!!”.  Luckily, when Jeff got out of the car, she recognized him from when he used to live in Canmore.  And she remembered that for a hoarder, he has quality taste in books.  Whew.  Saved.

We were pretty much useless for the rest of the day. 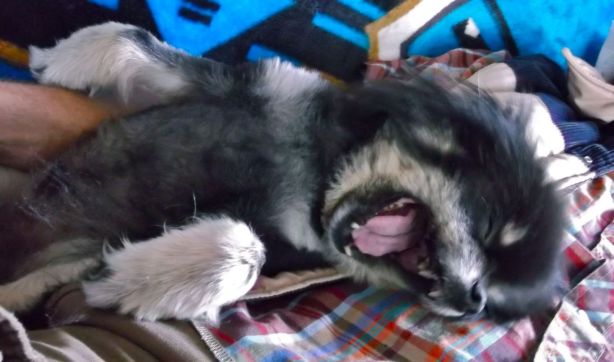 Off to the Land of Nod.  Sleep deeply, Jimmy!!!!  It’s hard work when you’re the cutest puppy in the entire universe!!!!