Happy 100th birthday, Calgary Stampede!!!!  Yahoo!!!!!  Too much fun, too much fun.  My brain has had to recover from Stampede.  Sorry for not posting sooner!

Our little household was aflutter preparing for the Stampede!!!!  I’ve been looking forward to attending Stampede ever since I’ve met Jeff!  One could say one of the draws to becoming a Canuck was the Stampede….I jest!  We put on our best western wear + I asked Jeff multiple times, “How do I look?  How do I look?”.  I even whined, “You look cuter than I do!”.  Yeah, I’ll admit it.  I said it.  Finally, we hopped onto a bus + then onto the C-train (This is the recommended route.  Parking is notoriously horrific) to our much anticipated destination!!!!!!!!!!

My gods, man!  Why so uptight!?  Smile!  I think Jeff was so excited he couldn’t really express himself like I did by jumping up + down + squealing.  He had to contain his excitement in a masculine way = stoic.

There were cowboy hats adorned atop so many a Calgarian head during the week of the Stampede.

Of course, our first stop was the Indian Village.

Onstage were amazing dancers performing in their gorgeous regalia. 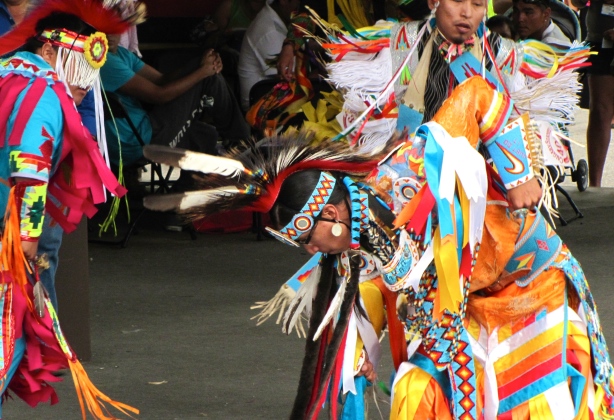 As the elders looked on.

Closeup of dancer catching his breath during the applause of the audience.

Next was the women’s turn to perform.

I loved the movement in the way they danced + the sound the silver cones on their dresses made when they shook.

If I was forced to play favorites, it would have been this guy: 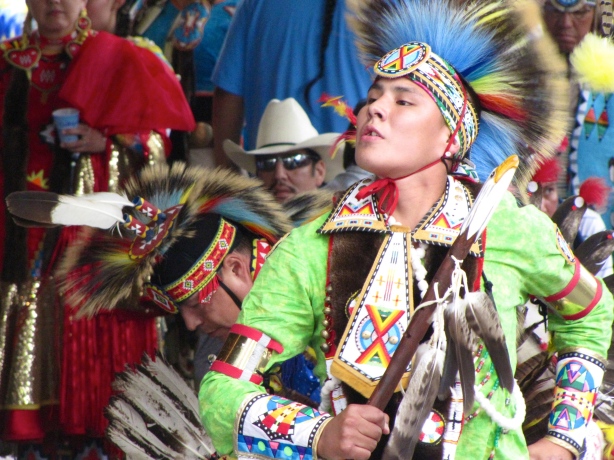 A beautiful dancer waiting to perform.

Of course it is decreed by law that I take a picture with the mounties!!! 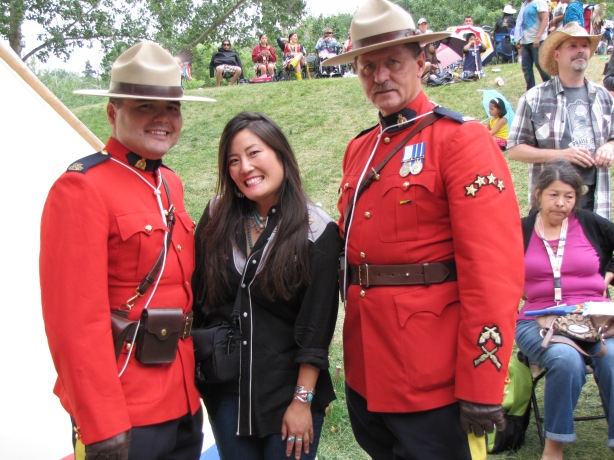 DORK!!!  Anyways, I could have stayed forever at the Indian Village, but we hadn’t even touched the surface of Stampede!  Obligatory Stampede tourist photo!!!!!

I don’t know the variations within corn doggery, but this Stampede corn dog was GOOOOOD!!!!!  Unfortunately while we were chowing down, we happened to witness an extremely overzealous Stampede goer get his head directed over a trash can for vomiting purposes by the Stampede police.  Not appetizing at all.  I wonder if there’s a Stampede jail like there’s a secret Disneyland jail? 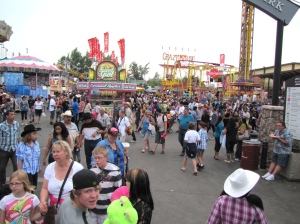 And…..Rasta Banana!!!!!  At least that’s what I called him.  I don’t know why, but for some reason there were a lot of “Rasta” themed prizes at the Stampede.  “Rasta Bananaaaaaaa!!!!!” I would randomly yell throughout the day.  Jeff didn’t find it funny.  Not one bit. 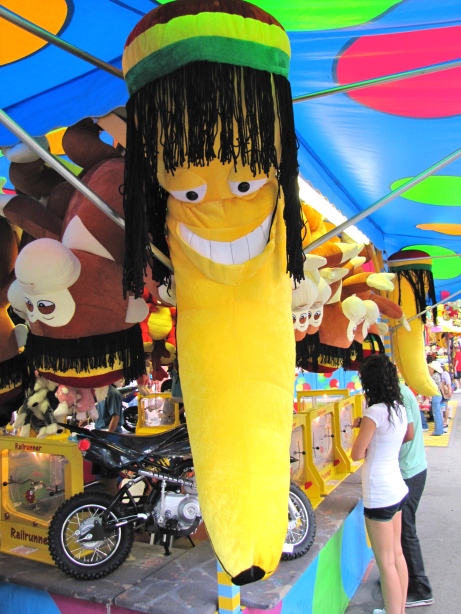 Our main goal on Saturday was to attend the chuckwagon races.  But guess what?!  It shall have to wait!!!  There’s too much to post about the chuckwagons, so I will have to save it for another day!!!!  My apologies!  Until then, my friends!!!!  Love you!