Inspiration L.A. is the brainchild of one Mr. Rin Tanaka of Japan.  It is a vintage + Americana “convention” of sorts that Jeff + I attended over the weekend at the Queen Mary in Long Beach.

Rin Tanaka is a photographer + journalist who took a passion for what he loves + created an American vintage kingdom.  His series of books, “My Freedamn” painstakingly + lovingly chronicles surf, skate, rockabilly, Hawaiiana, chop-shop + hippie cultures.  I’ve been collecting his beautiful + slightly OCD books for years (that’s the only way the Japanese know how to do it – I can say that.  I’m Japanese).

Hottie pro long-boarder Joel Tudor on the cover of the first book.

Jeff’s well trained ears overheard a vendor at the Long Beach Flea Market talking about Rin’s gathering + we bought tickets online lickety-split!!!!  We were not going to miss this groovy happening!  We are hip to it, man!!!!

We attended two days of Inspiration L.A.  Yes two!  Here we are in some of our finest threads.  Not really, but we tried to make an effort. 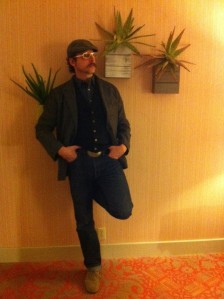 Can you tell that I’m trying to suck everything in + fool the eye with the way my hands are placed????  No?  Well I thought it looked like a perfectly natural pose….time for Shelli to rein it in, y’all.  One too many burritos for this lady.  When I first bought this dress in Hawaii, it fit me perfectly.  At Inspiration L.A. I felt like a stuffed sausage in a casing + was slightly uncomfortable the entire night.  Yes, if you had to ask, I put on Spanx.

Jeff kept taking “couple” photos of us + I started to get cranky. 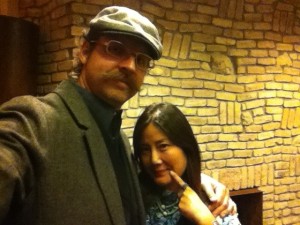 Note to cranky wives.  If your husband won’t stop taking pictures + you’re over it, start making ridiculous faces.  He will quickly become exasperated + will refrain from taking pictures.  I win!!!!!

I will not bore you with all the details, but let me just give you a briefing.  Japanese people like to spend money.  Their wallets were burning holes in their pockets.  One guy was excited because he spent $7,000.00 on a 1920’s era jacket.

There were gold rush era Levi’s, custom denim, vintage reproduction sweaters, turquoise, beautiful leather jackets…all very covet worthy.  But, prices were hiked up for the Japanese market, so purchases were not to be had by Jeff + I. 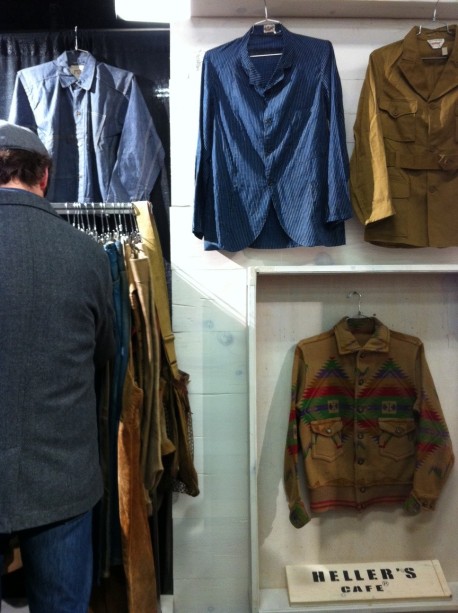 Nevertheless, it was fun talking to the vendors, hearing about their sales transactions with Japanese boutiques + learning about what the Japanese market is looking for.  All good things to take note of for when I get ready to SELL ALL OF JEFF’S STUFF.  MWA-HA-HA-HA-HAAAAA!!!!!!

We got to meet Rin + bought some more of his books at a sweet deal!  He signed all the books for us + was a really, really nice + mellow dude!

It’s funny because in my head I pictured him to look like an older, chubby rockabilly Japanese guy with horn rim glasses, cuffed jeans + Converse.  Don’t ask me why.  Instead, he was sort of like a Japanese Spicoli.

I was pleasantly surprised.

My big question of the day.  Why was this guy’s scarf tied around his head like that?!  I missed my opportunity to ask him about it, + the vision of his stupid scarf was burned into my memory all day!!!!  Arrrrgh!!!!! 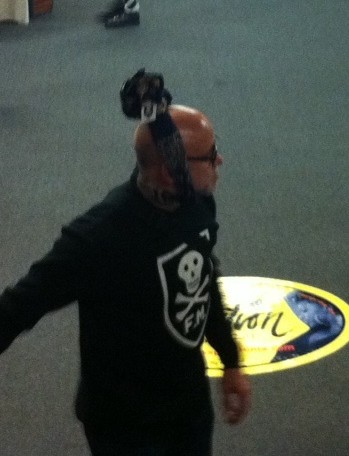 The Surf/punk/Francophile/On the Waterfront look was really popular at the show. 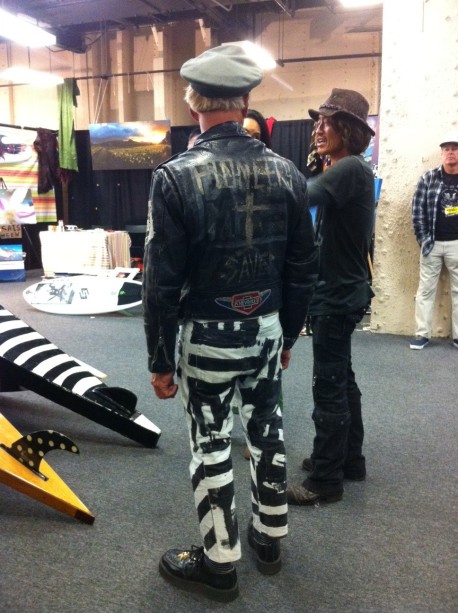 Just kidding.  It was just that dude.  There were a lot of Japanese guys that looked like Chong from Cheech + Chong.  And a lot of white dudes that were too cool for school in their vintage sweaters + Red Wing boots.  They bored me, so I didn’t take pictures of them.

Jeff was like a kid in a candy store.  It was basically like a men’s vintage convention.  Not much women’s clothes – but that’s what I expected. 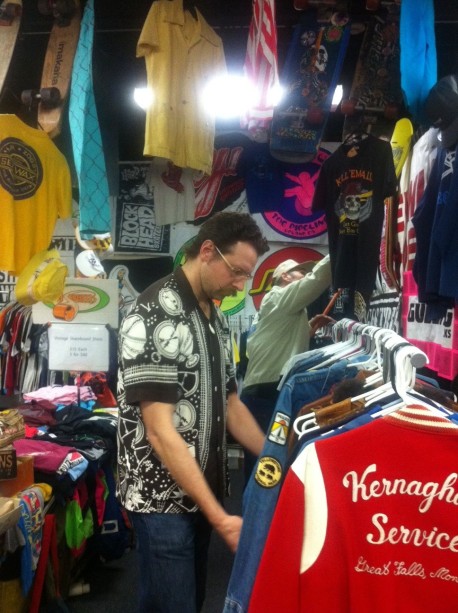 We were like students of vintage at this show!  It was an exhausting two days of taking in all the information + looking at so many things.  If you go there just to shop, I’d say check out a flea market instead, but if you want to meet a lot of people educated in the buying + selling of men’s collector vintage – this is a #1 destination.  Thanks for an awesome time, Rin!!!  See you next year!  Signing off!  Until next time!!!!!!!