Hello all!!!  Posts have been delayed due to many factors.

1) A general feeling of malaise  2) New Years trip to the desert = no technology  for Shelli (Jeff on the other hand is armed with multiple sources of technological distraction).

This is going to have to be a multi blog mini-series, because there are too many darned tidbits for me to wrap my head around.

The day before our ANNUAL JOSHUA TREE NEW YEARS EXTRAVAGANZA, alas I became afflicted with a head cold.  Here is a pic of me at Art’s Deli in Studio City nursing a bowl of matzo ball soup.  Not happy with the Canadian paparrazzi (Jeff).

The next day I tried to muster up the ghost of Mary Pickford or Shirley Temple as we headed out for the great desert.

Poor Jeff.  The ordeals I put him up against.  When Jeff asked my dad for my hand in marriage, my dad said + I quote, “Good luck, you’ve got your hands full!”.  And my mom has been known to tell Jeff after the wedding, “It’s never too late, you know….”.  Thanks guys, thanks a lot.

After the 2 1/2 hour drive to our VRBO (Vacation Rental By Owner) in Yucca Valley, we settled in + had some vino on the hilltop behind our house!  Oh Gods be praised!!!

The next day (12/30/11) we headed out early for the Salton Sea.  We have always wanted to visit the Salton Sea + due to lack of funding, 70 of California’s state parks (including the Salton Sea) are designated for closure, so we wanted to get in on that action!  http://savestateparks.org/

The Salton Sea is a freak combination of natural + man-made causes.  Created in 1905 due to heavy rainfall + snowmelt, this caused the Colorado River to swell.  After many attempts to dam + slow down the influx of water + drainage, the remainder of the water filled a desert salt flat of what was to be later known as the Salton Sea.  Formed in the Imperial Valley, the Salton Sea became known as a glamorous tourist destination, where people enjoyed boating + water skiing.  It had it’s hey day, but due to no outflow, the Salton Sea’s increasing salinity (it’s said to be saltier than the Pacific Ocean) + bacterial levels of agricultural runoff have caused the Sea to become a huge, toxic pool.

This may appear to the untrained eye as if Jeff is walking towards a tropical paradise….

The smell is also unforgettable. It lingers in your nostrils to the point where even being sick + having a stuffed up nose was was no respite.

Jeff thought he was walking on a sandy shore, but when he looked down he realized…..it was all barnacles + fish bones!  GROOOOSSS!! 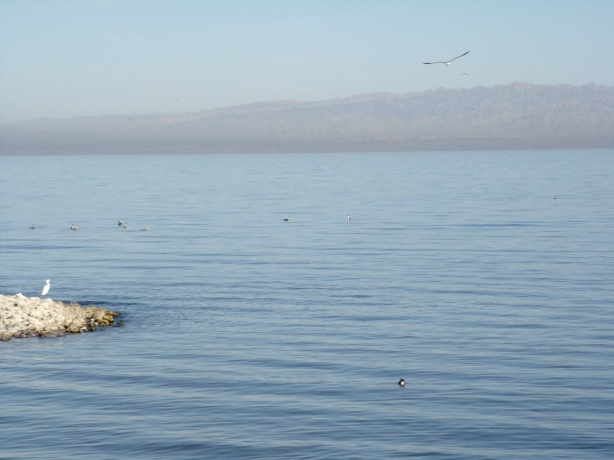 Thankfully, it is a bird watchers’ paradise.  Storks, herons, grebes, pelicans, you name it.  I haven’t even begun to research the impact the grody Salton Sea has on the birds’ well beings, though.  Regular Negative Nancy over here!!!!  Gloom + doom, y’all!!!!

Well, I tried to give the marina an aura of non-stinky disgustingness.

Doesn’t this photo look like a cool, refreshing summer day?

Well, it would have been even more handy if it had contained an actual survey for us to fill out.  It looked like people had given up to just let the Salton Sea rot.  To be continued….