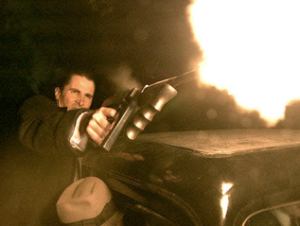 Sorry it’s been so long since I’ve posted.  Working night shoots for the past couple weeks has been interesting.  You would think that if you were acclimatized to working nights week after week, it would be okay, but you still feel crazy.  It’s not natural for human beings to stay up all night + sleep during the day.  I’m not a bat for god’s sake!  I need vitamin D!!!!  The good thing is, everyone at work feels crazy, so you’re all in the same boat.  Wait, I don’t know if 200 + people feeling crazy is a good thing…My friend + I talk about things that make us really happy while we’re working at 3am+ feeling loopy.  Lately, it’s been buffalo.  Yes, buffalo.  She was listening on NPR about a man in Alberta who has a pet buffalo named Bailey Jr., raised from infancy.  It likes to spend it’s afternoons watching tv in the living room.  And of course, they’re Canadian. 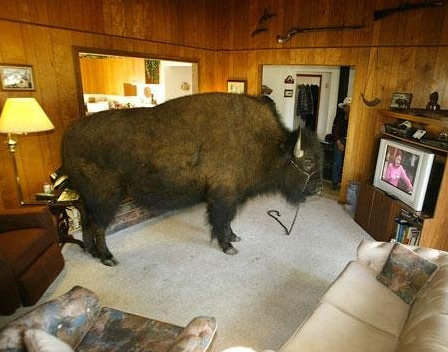 What’s not to love? 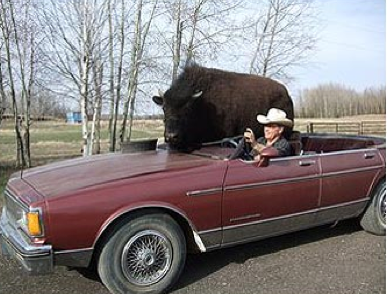 They even converted their sedan so that Baily Jr. can sit on the passenger side!  To die for!!!!

So, of course we took this obsession further (once again, working nights = loco) + my friend discovered this video:

If Jeff + I didn’t meet + get married, I would have sought out this guy on a buffalo!!!  What a dream boat with his flowy hair + buckskin!!!

Oh + I titled this post “Pardon Me?”  because during the week we were doing stunts + firing tommy guns.  I didn’t plug my ears quick enough + I think I blew out my right ear drum.  I went to lunch with my buddy Debbie today + I had to ask her, “Can you speak up a little?  We were shooting guns at work + now I can’t hear very well out of my right ear.”.  That’s a totally normal statement to make about your work day. 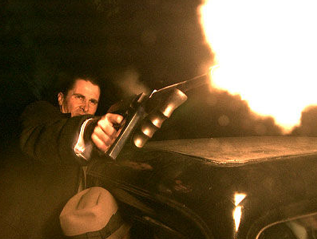