How’s it going, eh?!  It’s been great to be back in Vancouver at Tom + Deb’s.  Matt has transitioned from geckos to salamanders.  Tobin + I have transitioned from sand castles to Lego villages.  Yesterday was Jeff’s brother Benjamin’s birthday.  Jeff + I stopped by the most awesome british butcher recommended by Steve to pick up some burgers.  This place was my dad’s dream.  Tongue, haggis, kidney pie, blood sausage, 12 different types of bacon, hooray!!!!! 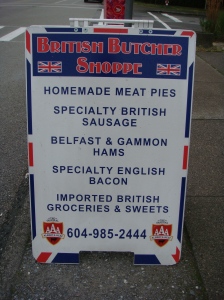 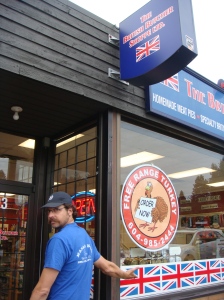 Look at the dolls they had for sale!!!  I was like, “WHAAAAT!!!!????”.  I had seen them before because Jeff + his family grew up with these minstrel dolls called Golliwogs which was a character from children’s books popular in England during the late 19th century.  AND they had a Golliwog clock on the wall!!!  I just couldn’t believe they had them for sale on their counter, right up in front! 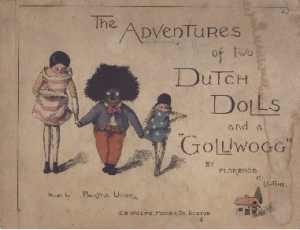 Jeff’s grandmother owned the original 1895 publication of this exact book.

Anyways, we all enjoyed the burgers – Steve, Liz, Keiko + Hana came to join the festivities as well!!!  It was awesome being with everyone again! 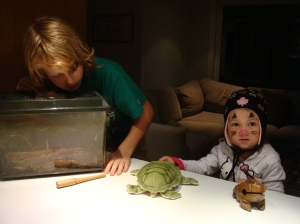 The Salamander Whisperer + his face painted assistant, Hana the Amazing!!!

Keiko patiently waiting for her burger to be cut. 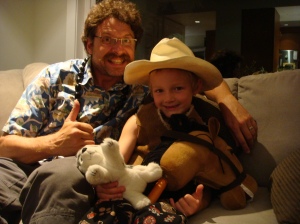 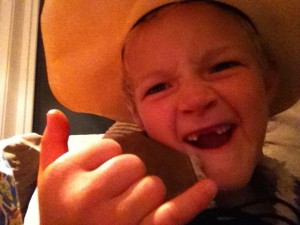 One totally rad dude.  Ready to rip it up to the extreme.  Jeff said now he really looks Canadian. Really?  I didn’t know Canadians were toothless.

I thought Tobin was channeling Bunker Spreckels, infamous surfer from the 70’s who inherited $50 million from the family fortune (his grandfather was a sugar baron, publisher + railroad tycoon).  He partied hard + had really great style.  Oh yeah, + Clark Gable was his step father. 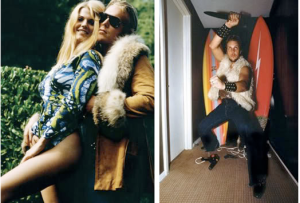 Someone is anticipating cake time! 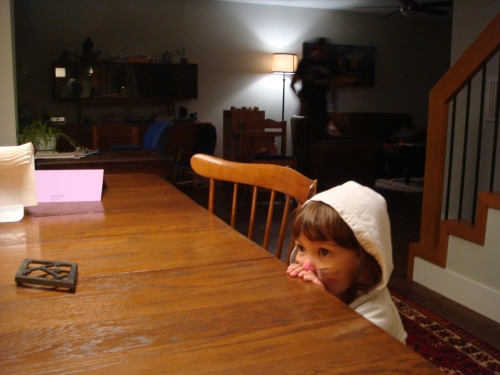 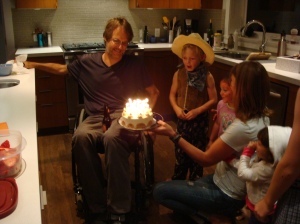 Today Jeff + I had a phone consultation with an lawyer to discuss our immigration paperwork.  It is going to be alot of work, but she told us that if we have all our documents in order, it will take 5-6 months to process!!!  Very good news!!!  Chin chin!!!!

Well, Vancouver is already damp + drizzly.  I’m going to buy a car load of Vitamin D when I move up here.  I’m going to get Seasonal Affective Disorder y’all!!!  We took the bus to pick up Jeff’s car from the detailer in downtown.

The bus!!!  Very exotic for an Angeleno.

After picking up the car + on the way back home to North Vancouver, we were driving through what Jeff + I call Cracky McJacky Town.  Very unsavory, but I could still eat Canada’s crack addicts for breakfast when comparing them with Los Angeles crack addicts!!!  But look at what we saw!!! 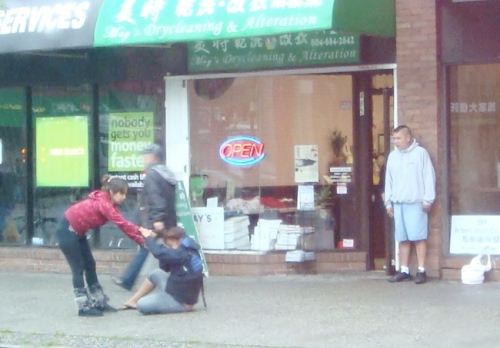 Girl fight!!!!  The little one was dragging the big one by the hair!!!  Then they both stood up + the little one was throwing punches like a pro boxer!  It was on the driver’s side + I was hitting Jeff + yelling, “Take a picture!!!!”.  Jeff wimped out + didn’t even roll down the window to get a good shot, so it’s blurry.  To all my American friends, you probably thought Canada was all maple syrup + baby deers?!   Well, think again!!!  The mean streets of the Great White North!!!  Voila!!!!!