I’ve made an executive decision to abbreviate yesterday’s volcanic activities.  There’s too much to post.  Let’s just say we encountered a group of people + the women + girls were all dressed in full length dresses + bonnets.  I saw the father/husband/elder + one of the girls at the Hilo Salvation Army.  Jeff + I assumed the girl was just a Laura Ingalls Wilder fanatic.  But there was a whole group of them!  Cult alert!!!!  Jeff distracted the father/husband/elder by talking to him about “getting back to the land” + took a covert picture.  I couldn’t even go near the father/husband/elder because he creeped me out so much + he was wearing dirty 70’s Lee jeans.

Then we drove down to the coast.

Yiiiiiikes!!!!  The waves were POUNDING!!!!  And the cliff edge was on the precipice of collapse!!! 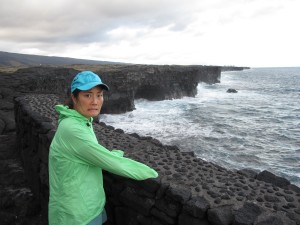 Those waves were POUNDING ON THE CLIFFS!!!!  Oh, by the way, do you like my Sporty Spice outfit?

After my fright of crumbling off a unstable cliff into the unrelenting sea, we walked down to the ancient petroglyphs.  It was dusk when we arrived at the petroglyphs + it was really serene to be there under the full moon. 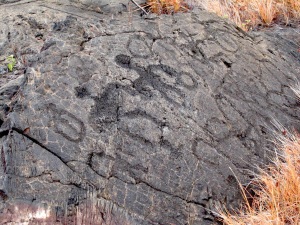 Today, we headed out of Volcano Village heading south-west towards the west coast of the Big Island.  Our first stop was Punalu’u Black Sand Beach.  Honestly, I was not the impressed, except for the large turtles that like to bask on the sand. 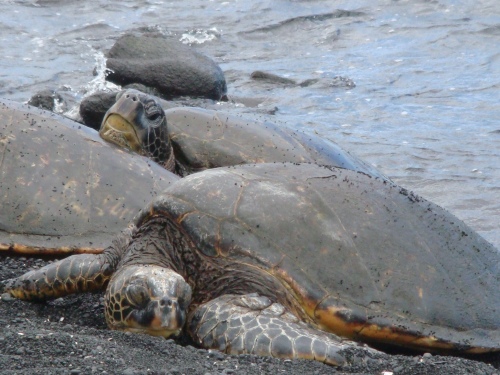 There was a sign clearly stating + illustrating for tourists to stay 15 feet away from the turtles.  On the way back from the bathroom we saw some dumb ass tourists posing RIGHT NEXT TO THE TURTLES!!!!  I was enraged!!!!!!  I screamed, “Hey!!!  Hey!!!  Do you see this sign (as I pointed to it)???!!!  15 feet away!!!”  Jeff had to take me away.  The poor, harassed turtles.  We met a couple local haoles on Punalu’u + they told us about a beach that is not on the map + is the perfect spot to see as far as the eye can see.  I’m not going to divulge secret info on a blog but they said, “When you pass XXXXX, you’ll see some XXXXXX, and that’s when you’ll make a XXXXXX.  It’s one of the best surf spots on the island.  There is a man named Uncle Abel who is a Hawaiian institution + he’ll show you the way.”  Sure enough, we got to the XXXXX + we saw 3 men chilling – I was nervous, but Jeff is friendly + confident in that way.  We ended up hanging out with Uncle Abel, Uncle Joe + his son, drinking beers + talking story.  Uncle Abel has been on his land for generations.  The government has been trying to kick him off his land for decades + it is a constant battle for him.  He was so wise, warm, kind, generous + spiritual.  Here’s the bruddahs.

If you want to sign a petition to help Uncle Abel in his cause, here is the link:  http://www.petitionbuzz.com/petitions/freekawaafreehawaii

The road to the beach:

The perfect black sand beach.  Punalu’u couldn’t even compare with it’s pristine coastline. We gave Uncle Abel a hug goodbye + kept on truckin’ towards Captain Cook – our final destination for the next couple of days.

It was verging on sunset so we headed towards Pu’uhonau o Honaunau, the place of refuge.  Those who broke the ancient law or kapu would avoid punishment or execution by swimming shark infested seas to the Pu’uhonau o Honaunau + their wrongful deeds would be absolved. 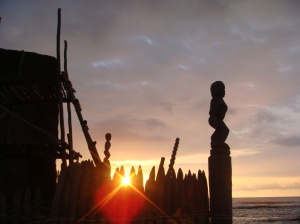 Here was a lady trying to balance her chi or something: 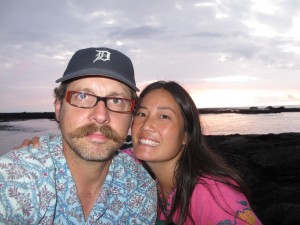 Onwards to my home away from home!!!  The Manago Hotel!!! My dad + I discovered it last year during my search for good butterfish at a restaurant.  The Manago was founded in 1917 by a Japanese-Hawaiian family.  A friend of mine from Hawaii was freaked out that I stayed there, stating locals know not to stay at the Manago becauase it’s infamous for being haunted, considering it was built on plantation land.  Last year I rented a single, shared bathroom + granted, I was a little creeped out without even the knowledge that the place was haunted.  Nevertheless!!!!  I love the Manago!!!  And I knew Jeff would too!!!  Their restaurant is homey + comfort food style!!!!  I specially reserved the only Japanese tatami room they had + it is SO worth it!!!  The gal at the front desk remembered me from last year – so in!!!!

Luckily, the restaurant was open for another 15min.  We had their famous porkchops.  I’ve been dying for these porkchops for a year!!!  I don’t know what it is, because they are a little chewy + the onions are slightly crunchy, but there’s something about these chops that are off the chain!!!!

Always the yummy side dishes first that you have to dig into!!!!

Pork choooooooops!!!!  The best dinner so far!!!  It was so darn good, you didn’t hear a peep from us during the entire meal!!!!

Sake carafes from the kitchen.

This place is so old-school.     Doll from TV room. Did I tell you this place is creepy, or what?! 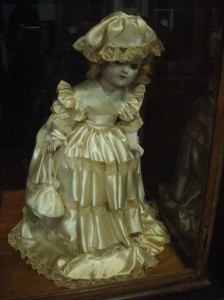 The Japanese furo in our bathroom.

eff changed into his jinbei that my mom bought for him last summer in Japan for a staged photo shoot.  Voila.  Our room. The only Japanese style in the hotel.

It’s so amazing!!!  It makes me feel like I’m in my grandpa’s house in Saitama-ken, Tsurugashima!!!!  My mom would be so happy!!! 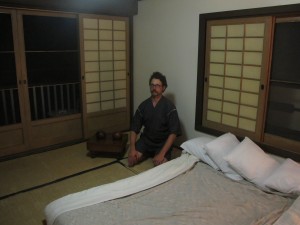 Jeff sitting next to the game of Go, an old Japanese strategy game.

Well, Jeff + I had a lot of strange adventures today.  But I didn’t want to forget the 10th anniversary of September 11th.  Please say a prayer for all of the families + friends that lost loved ones during the horrible tradgedy.