Hello all!!!!  I am officially in Canada.  During the flight I watched LA Ink the entire time + was pretty fascinated/disgusted considering I don’t watch TV + had never seen it before.

Jeff got production to help us out with a hotel room in Calgary since I arrived so late at night, he was working + a shuttle to Canmore (where he is staying during shooting) would be expensive + about an hour drive.  When I got to the room there were chocolate dipped strawberries waiting for me + a congratulations note on our engagement!  Oh la la!!!  Classy!!! 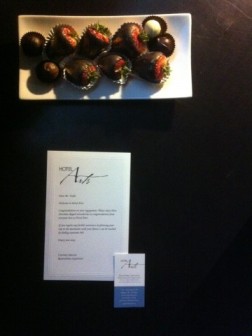 When Jeff walked through the door I screamed like he was one of the Beatles.  We haven’t seen each other in over 2 months.  That is longest we’ve been apart.  It is so great being back together, y’all!!!!  Look at his outfit:

Can you say, amazing? 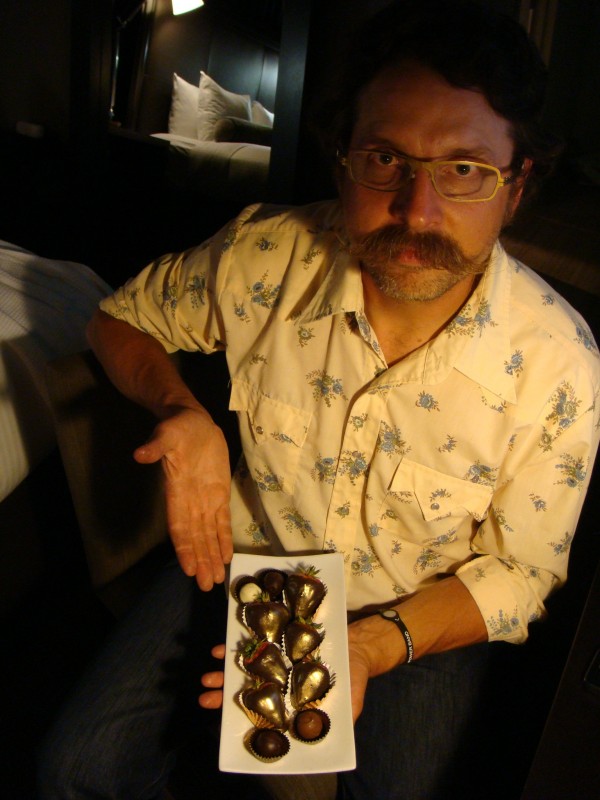 Today, I walked around downtown Calgary doing research for Jeff’s linen suit that he wants to get for the wedding.  Don’t worry everyone, he’s only going to wear the pants because it’ll be too hot, but he said every man needs a nice linen suit.  I saw this statue + became confused because I didn’t know Jeff played hockey + was made of wood:

I ambled along Stephen’s Avenue Walk which is an outdoor pedestrian mall which contains a high concentration of registered historic buildings in the city. Most of these building are sandstone; a result of the construction of fire resistant buildings that followed a fire in 1886 that damaged much of the city.

The building themselves were beautiful + the atmosphere was a little bit like 3rd Street Promenade in Santa Monica with the shops, kiosks + unsavory characters hanging out on benches all the live long day – but just not as good.  I was going to delete this horrible boring picture of Stephens Avenue: 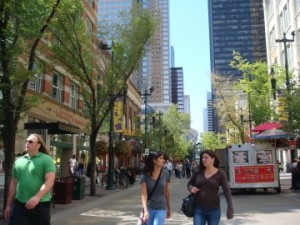 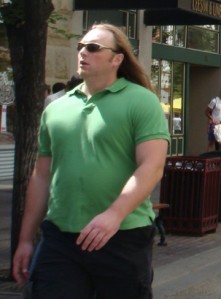 That dude is not messing around.

Here’s another fine gentleman who I believe is dipping into his bag of chew. 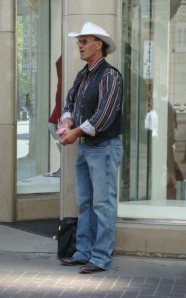 I almost forgot.  Lilash has been making my eyelids slightly sensitive.  I’m not gonna lie, y’all.  It gives my eyelids a slightly pinkish tint.  But, it’s so faint that it could possibly pass for pink fashion eyeshadow

Don’t worry I’m exaggerating a little bit.  Today feels better.  But I just wanted to warn everyone of the slight side effect.  It’s a once a day application for two weeks.  After that it’s a twice a week kind of deal.  Beauty = Pain.